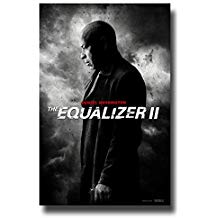 “There are two kinds of pain in this world. Pain that hurts and pain that alters. Today you get to choose.”

Denzel is back as Robert McCall, offering the bad guys a chance to do the right thing. Well, he offers that opportunity to a select few of them, I should say. When a group of highly trained operatives kill his friend, he’s out for blood. Antoine Fuqua’s The Equalizer 2 keeps all of the themes that made the first one great in this sequel. Though it is a sequel, I would say that it follows a very different path than the original. Where the first film is the setup, in this one McCall is accepted his role as a champion for the little guy and without hesitation acts to protect those who can’t protect themselves. However, the enemy is much different this time, as he will be forced to confront demons from his past, the kind that caused him to fake his death in the first. In order to put things right, he may have to come out of the shadows.

Set some time after the events of the original film, former black ops agent Robert McCall remains in his self-imposed isolation, but maintains his situational awareness to the problems around him such as helping a woman who was attacked by her coworkers or helping a talented teenage neighbor torn between walking the straight and narrow or answering the call of the streets. That is until his closest friend (Melissa Leo) is murdered while investigating the assassination of a CIA asset. Determined to find and kill those responsible, McCall reveals himself to his former black ops partner (Pedro Pascal) and enlists his help in locating the men responsible.

The more Robert investigates, the more he discovers a dark connection to the men involved in the assassination and murder of his friend. The men he is after are highly trained like him and are looking for him just as hard as he is looking for them. They are going to regret killing his friend when he catches up with them.

The announcement of this sequel caught me off guard. I had no idea that a sequel had even been commissioned until the release date had been announced. For me that’s rare, as I pride myself on staying current with the latest movie news. As an avid fan of the original film, I was very intrigued and excited for this sequel, and though it was pretty different than the first one, with this one being more investigative, I enjoyed it overall. There are a few things I wished had been done slightly better, such as the antagonists. In their introductory scene, there was intrigue when their victim asked them why they were targeting them; he they made it clear that they could not be bribed or dissuaded. Their steadfast devotion to what they were about to do spoke to a higher purpose; however, they did not live up to this ideal upon their full reveal. Then their motivation just became basic and predictable. Teddy from the original film was a more interesting antagonist.

Besides that, the story was entertaining and followed the blueprint established in the first movie. The action sequences were thrilling and kept you on the edge of your seat. Two scenes in particular lived up to all the hype put forth in the highly publicized trailers. I’m guessing you know which ones, but I’m going to tell you anyway, because they were two of my favorites: the hotel fight scene and the one-on-one battle in the car. Granted, Denzel made quick work of his opponents in both scenes, but it is done in such a gritty and believable fashion and delivered with patented Denzel Washington charisma that they will probably end up being your favorites, too.

The film also pays an excellent homage to the original series in the fight scene aboard the train when it enters the tunnel, mirroring the intro to the TV show. In another note, I hope you like the bits of watch from the first movie, because it is also highlighted this time around. A cool game would be to count to yourself when you first see it and compare with the time shown on the watch after Denzel cleans his opponent’s clock.

Jeremy Butler is a film school graduate of the International Academy of Design and Technology. He is been writing for Upcomingdiscs since 2012; however, movies have played a big part of his life for much longer. Favorite genres include horror, science fiction/fantasy, and comedy. Favorite movies are V for Vendetta, Boondocks Saints, Kiss Kiss Bang Bang, and The Godfather.
Super Troopers 2 (Blu-ray) Isle of Dogs (Blu-ray)