Posted in: Disc Reviews by Brent Lorentson on July 21st, 2018 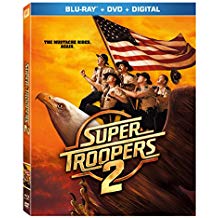 I’m going to go ahead and say Super Troopers is without a doubt one of my favorite comedies of all time.  Sure, I know many will disagree with me, and that’s fine.  Since I first saw their film back in 2002 when I got the DVD, I was always excited to see what would come next from the Broken Lizard comedy troupe.  There was Club Dread, which induced a few chuckles as they tackled the slasher genre, and then they had Beerfest, which was pretty funny but simply didn’t hold up to their performances as Vermont’s Highway Patrolmen.  The antics from the first film are simply classic to me, and the film is something I manage to quote from on a weekly basis amongst friends, and when I hear that someone has managed to go all these years without experiencing the film, it’s something I feel the need to remedy immediately.  It’s more than just a simple stoner comedy, and rumblings about a sequel have been going on for years, but things seemed to always fall apart. Now after all these years, it’s finally happened.

In case you were wondering, just because the film releases on 4/20, this isn’t a movie that requires you to smoke the green dragon to enjoy. The Broken Lizard gang just knows their audience and simply wanted to be part of the joke. For those who saw the first film and couldn’t stand it, well, there’s no sense in even bothering to check out this entry. As for those who have managed to miss the first one, please check out the first before going in so you can enjoy the film for everything it has to offer.

The film kicks off with a dream sequence that reintroduces us to the gang. While it was nice seeing the gang back, this sequence did have me worried that perhaps the guys just didn’t have it anymore.  Thankfully everything else that follows is more in line with what I had hoped for. Thorny (Jay Chandrasekhar), Mac (Steve Lemme), Foster (Paul Soter), Rabbit (Erik Stolhanske) and of course Farva (Kevin Heffernan) all return, but when we meet them they are no longer on the force due to an unfortunate accident they had with a celebrity ride-along. The gang is getting together for a fishing trip that will take them across the Canadian border, where they are hit with the surprise that they’ll have an opportunity to get their jobs back. They are recruited to help in the transition of a French-Canadian town that is being made a part of the US.  Rob Lowe plays the part of a former hockey legend who becomes the mayor of the small town who wants to aid as best he can in the transition.  But the bread and butter of the film is the rivalry that occurs between the Mounties and the Troopers.

One of the film’s funnier moments comes when the Troopers discover a box filled with packages of unmarked pills.  As each of the guys takes a pill, they each are affected in different and amusing ways.  The pills lead them eventually to discovering there is more going on in this French-Canadian town than meets the eye.

Brian Cox returns as the curmudgeon police captain who seems to be having a good time once again cutting up with the Broken Lizard gang.  Seeing the entire ensemble working together is fun, but it does at times make you wish this was a sequel that happened a decade sooner.  For those who were perhaps looking for a stronger story for the sequel, I’m sorry, but there really isn’t much of one, and we really don’t get to see much development with the characters after all these years, but is that a bad thing?  Personally I would hate to have seen a more professional/mature version of these characters; it’s part of the charm of them.  If a third film comes along and we see them having to train some rookies, then perhaps seeing them evolve could be a route to go, but right now I don’t believe that’s what the fans wanted this time around.  The jokes are timely, poking fun at the “make America great” movement, while also simply being a good old-fashioned slap-stick comedy in the vein of Police Academy if the Three Stooges were its recruits.

At the end of the day the sequel is a success, and when it comes to DVD and Netflix, I’m sure it’s going to have some high (no pun intended…OK maybe slightly intended) replay value, but it’s not enough to outshine the first film.  The chemistry with these guys is something that manages to shine through and has me looking forward to seeing them again.  Perhaps with a big enough box office opening it will be enough to get these guys back with a bigger film; after all, a sequel to Beerfest has been in the works for some time now.

Super Troopers 2 is presented in the aspect ratio 1.85:1.  The 1080p image is arrived at with an AVC MPEG-4 codec at an average of 35 mbps.  While the image may not be crisp and clear enough for you to count each of Thorny’s mustache hairs, this transfer does look good.  Skin tones look good, and the colors come through very nicely; even the few night scenes offer some nice depth and black separation.  The film is a comedy, which tends to mean it is a bit over-lit, and that is the case at times here, but that doesn’t matter much, because viewers are watching for the punchlines and not the atmosphere and cinematography.  There were no artifacts in the transfer either.

The DTS-HD Master Audio 5.1 track is just about what you would expect for a comedy.  The dialog comes out clean, so you can hear all the jokes even when there are multiple people talking; the gang’s introduction to the town is a good example of this.  The actual music at the start of the picture comes through a little loud, but not quite enough to need to adjust the volume.  This is a fairly standard audio mix for a comedy. It’s nothing to show off, but it gets the job done.

Making Super Troopers 2: (39:50) Here we get a good look at what all had to happen to get this film made.  We get plenty of behind the scenes as the Broken Lizard gang works on the Indie Gogo campaign and their interaction with the fans that contributed to the film.  We also get a good mix of behind-the-scenes footage and interviews with the guys.  Though my favorite bit involves them discussing that there will be a Super Troopers 3.

Extended/ Deleted Scenes: (19:40) There is a Play-All button which I went ahead and pressed and was entertained by the numerous scenes we get to see.  There are two scenes in particular I wish had stayed in, one involves Rabbit and a bear, and the other is Thorny when he’s about to trim his beard.  If you’re a fan of the film, really this is an extra you’ll have to check out.

Kevin Heffernan: Method Actor (1:50) An amusing look at how the actor gets into playing the character of Farva.

The wait was too long between films. Though I still enjoyed the film, it doesn’t hold up to the first film.  Sure, the film has some replay value, but there is a bit of disappointment that comes with the film.  Now hearing that they want to do a third film (the sooner the better), I’d like to see the guys give these characters one more go-around and a proper sendoff.  If you’re a fan of Broken Lizard, this is definitely a must-watch, but if you were not a fan of the first film, this one may not be for you.

Brent Lorentson is a horror writer and film critic based out of Tampa, Florida. With a BA in Digital Film, he co-wrote and co-directed Scavenger Hunt. His short stories have appeared in various horror anthologies. In 2019 his short script Fertile Blood will be a part of the anthology horror film Slumber Party. He is currently working on his first novel A Dark and Secret Place set to be released in late 2019. Favorite Films: Taxi Driver, Fight Club, I Saw the Devil, The Wild Bunch, Dawn of the Dead, A Clockwork Orange, Pulp Fiction, Heathers, The Monster Squad, and High Fidelity.
The Good Place: The Complete Second Season Equalizer 2