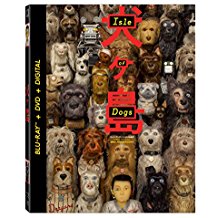 “At the end of the bloody dog wars the vanquished mongrels became powerless house pets: tamed, mastered, scorned. But they survived and multiplied…”

Offbeat, heavy-handed characters, bleak outcast situations, and moody; it’s a marvelous adventure for those who like Wes Anderson movies.  This one, however, shows his range with an animated film that’s worthy of most Japanese greats. From the opening drum introduction of Isle of Dogs to the heartfelt finale, Anderson captures a cold, disturbing environment from which his characters can rise up.  If you like offbeat stories produced in stop-motion animation in the vein of Tim Burton’s Corpse Bride and Frankenweenie, then this film should not be missed.

It’s 20 years in the future, and the Japanese are trying to deal with the overpopulation of dogs. To make matters worse, there’s an outbreak of dog flu in the city of Magazaki.  Mayor Kobayashi calls for a quarantine and has all dogs sent to Trash Island, a waste dump far from the mainland that serves the big city. There the canines set up residence on what is now called the Isle of Dogs.

Chief has come forward to put up a stand on the island and tells his team of Rex, King, Duke, and Boss that they are to lead the others as top alpha dogs. It has been many years since the first dog was dumped on the vast trash-filled island, and Chief wants to make sure they survive.  In the meantime, 12-year-old boy Atari has commandeered a small plane so he can fly to the Isle to find his dog Spots, who was taken away from him when he was a small child.  When he crashes at the trash dump, he finds the dog leaders.  Together they take on the quest to find Spots.

If you are familiar with Wes Anderson, then you know he’s a writer who searches for social changes and them presents them with a dark comic tone.  He’s most noted for The Grand Budapest Hotel, Moonrise Kingdom and The Royal Tenenbaums, of which all three were nominated for an Oscar.  But in 2010 he came out with an animated film called The Fantastic Mr. Fox, and it was also nominated for an Oscar. So why not try again? Enter Isle of Dogs, the quick-witted film with a social story about people, no, I mean dogs.

It’s this film that hits a new chord pitting society against an overpopulation of dogs and then casting them off onto a garbage-filled island. Trying to exist, they band together for a common cause: food and shelter.  It tells volumes about the problems in Africa and the Middle East, where survival of the strongest is trying to prevail.

The stop-motion animation is much better than his The Fantastic Mr. Fox, but still not as good as Tim Burton’s Corpse Bride.  Bride’s animation was more fluid, and the characters were more mobile. Here, the characters are stiff and move along straight-legged at times.  That said, Anderson’s backgrounds are more colorful and brighter.  I like what he did with the opening sequence and the drummers. They set the tone for the movie as they beat down on their drums as the story moves slowly into the introduction of the film.  Throughout the film the drums are used to create suspense and then urgency.

Isle Of Dogs is presented in its original aspect ratio of 2.39:1. The 1080p image is arrived at with an AVC MPEG-4 codec at an average 25-30 mbps. The high definition image presentation is a bit of a mixed bag, to be sure. The source is stop-motion puppets with miniature sets and a bit of computer-generated help. With detail it’s easy to see things for what they are, but I don’t consider any of that a flaw. Stop-motion is an art that is rarely used today and fits in quite nicely with the fable-like nature of this film. Colors give us a stark contrast between the two major locations. The city is bright with nice reds and yellows. The Trash Island setting is almost monochromatic with the trash sorted into distinct but dreary lands. Lighting effects are a nice touch here, and it all fits into the fable atmosphere that is intended. Black levels are average, but little shadow definition is required here.

The DTS-HD Master Audio 5.1 is pretty much there to serve the dialog. Of course, most of the humans speak in often untranslated Japanese. The score is minimalistic, usually a rather percussive collection of drums or a quiet solo guitar or piano. Surrounds aren’t aggressive, nor should you expect them to be. This is an intimate audio presentation that needs only to be clear and clean. Subs add just the slightest weight to the characters and dialog.

All of the extras are found under a heading of promotional features, and that’s really exactly what they are.

Animators: (3:42)  Wes Anderson narrates a very brief look at the process and how it was influenced by such elements as voice cast and watching real dogs move.

Isle Of Dogs Cast: (5:09) This feature offers cast comments in the clever guise of their characters. It’s kind of nice, and a lot of work and effort was required to go this path. It’s new animation as they talk through their characters.

Puppets: (4:03) A look at the process of making the puppets and making them moveable for frame by frame adjustments.

Magasaki City And Trash Island: (2:59) A look at the creation of the two locations and the materials used.

Weather And Elements: (3:04) Concept art and time-lapse of set construction allow us to see how certain effects were achieved.

Be cautious when deciding to allow immature children see the film, as it does have some scenes that are inappropriate for youngsters. A good film with some light comedy mixed with emotion.

John Delia has been on all sides of the movie business from publicity, writing for publications and on line blogs, script writing, to film making. Writer, critic, film editor he has worked as a film critic on this second go around for 14 years. He earned his Bachelor’s degree at the college of Journalism and Communications at the University of Florida in Gainesville, Florida. John is an active member of the Southeastern Film Critics Association (SEFCA) . Favorite Films: Lord of the Rings/Hobbit trilogies, The Godfather trilogy, the Indiana Jones trilogy (I didn't like the 4th), The Avengers and for TV it's Game of Thrones. As for animation it's a tie between anything Pixar and everything Hayao Miyazaki.
Equalizer 2 Tuesday Round Up: July 24, 2018