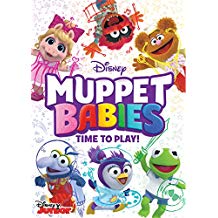 This one proved to be too juvenile for my kiddo and was way too juvenile for me. However, I maintain that with the right demographic, it is guaranteed hit. Muppet Babies: Time to Play is a reimagining of the original series and airs on Disney Junior. It brings back everyone’s favorite muppets, including Kermit, Piggy, and of course Gonzo. Imagination is key for this disc, as the characters transport themselves out of their daycare class and into several fantastic scenarios, like flying a plane or imagining themselves as a knight to overcome a fear of the dark. As I said, not really my cup of tea, but it was done in a charming way that it is easy to see it appealing to a younger audience. Just not my kid, who immediately asked to watch something else.

The disc is broken down into six episodes, with each episode having two parts usually featuring one muppet as the central focus. In every part there is a specific lesson, such as in the first episode with Kermit imagining himself a knight as a way of overcoming a fear of the dark. I know I mentioned this plot already, but it was the one that I most identified with as I recall how difficult it was for me as a child, and I remember that my imagination is what got me through. That speaks to the relatability of the disc, as I am nowhere close to the desired age group, but I was still able to find something to identify with.

In addition to the six episodes, there are also 10 shorts and six music videos; even Nalyce had to admit that you are getting a lot of bang for your buck with this disc.  The graphics are a bit on the juvenile side, but again I imagine that is by design. When I probed my daughter, what was the thing that she disliked, well, in her words, “this is for babies; I’m not a baby.” I can’t but agree with her assessment, as the disc is clearly poised for a specific market. As such, the potential for reaching people outside that market is unlikely, with the exception of possibly provoking childhood nostalgia in certain adults as it did with me.

To its credit, there are lessons that can be gleaned from the content, such as the importance of overcoming one’s fears, being a good sport even when you aren’t winning a competition, and the significance of accepting people for what’s on the inside. These key takeaways are vital in everyday life and speak to the relatability of the episodes, specifically Sir Kermit the Brave and The Great Muppet Sport-a-Thon.

In conclusion, as I mentioned, Muppet Babies: Time to Play did not get the Nalyce stamp of approval, but there are somethings within the disc that make it a worthwhile watch for the younger audience, everyday life lessons that every child should learn and live by.

Jeremy Butler is a film school graduate of the International Academy of Design and Technology. He is been writing for Upcomingdiscs since 2012; however, movies have played a big part of his life for much longer. Favorite genres include horror, science fiction/fantasy, and comedy. Favorite movies are V for Vendetta, Boondocks Saints, Kiss Kiss Bang Bang, and The Godfather.
Flora (Blu-ray) The House Of Tomorrow (Blu-ray)