The House Of Tomorrow (Blu-ray)

Posted in: Disc Reviews by Brent Lorentson on August 19th, 2018 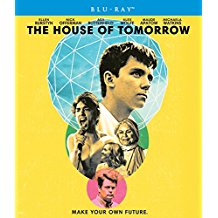 “Welcome to the future.”

This is how Josephine (Ellen Burstyn) introduces a church group that is touring her geodesic home, which also doubles as a museum dedicated to inventor R. Buckminster Fuller.  Josephine and her grandson, Sebastian (Asa Butterfield) have their own way of living in their home, a place where it is assumed Sebastian has never left long enough to experience how the real world functions.  His interactions with the public don’t stretch beyond the casual tourists who come by the home, and as a teenager he’s never experienced “junk food” of any kind.  But Sebastian’s reality crumbles after his grandmother has a stroke in the middle of a tour and he meets Jared (Alex Wolff).

At first glance, with his messy, green-highlighted hair and punk t-shirts, Jared looks the part of the renegade free spirit, but after we spend some time with him, we realize Jared is just as sheltered from the world as Sebastian is.  Jared had a heart transplant and is having to constantly take medication for fear  his body will reject his heart, so his father keeps him at home  so he doesn’t overstress his body. Jared’s dad, played by Nick Offerman, is the overprotective father who is also a youth minister and has the best intentions in acquainting Sebastian with his son, and the result is one of the better teenage bromances in years.  When we see Jared introduce Sebastian to punk music for the first time, it’s obvious that the music has awoken a rebellious nature that has been building in Sebastian for some time (who can blame him when all he had listened to before was classical music and whale sounds). Jared’s sister, Meredith (Maude Apatow) enters the film and quickly becomes the girl Sebastian develops feelings for, even though she is going through plenty of drama of her own.

It’s no big surprise that the overall theme of the film is about what can happen when you attempt to overprotect your child.  This isn’t a cautionary tale for parents, either, but just a glimpse at what can lead to teenage rebellion. The relationship between Sebastian and Jared is the strength of the film, and the chemistry between Butterfield and Wolff is what makes the story believable and work. The rest of the cast does a great job with the material they are given, though I do feel Burstyn was a bit underused at times. When she’s on screen, she definitely has a presence.

The film isn’t without its flaws, though, or at least story points that don’t make a lot of sense. For instance, we’re supposed to believe Sebastian and Josephine live in this home and survive simply off of giving tours and lectures.  My other issue is with them having access to the internet, and yet Sebastian seems to be oblivious to so much in pop culture, to the point of not knowing what a sleepover is.  Then there is the factor that this seems to be a small town, and though Sebastian goes into town to get supplies, he seems to have gone his entire life without knowing anyone other than his grandmother, yet she expects he will one day change the world. How do you change a world you know nothing about?  Sure, these are issues that bugged me while watching the film, but what stuck with me most was the heart of the film.

You don’t have to love or even care for punk music to appreciate the film.  First-time director Peter Livolsi has delivered a sweet and endearing film that should appeal to most audiences.

The House of Tomorrow is presented in the aspect ratio 1.85:1.  The 1080p image is arrived at with an AVC MPEG-4 codec at an average of 30 mbps.  The overall look of the film seems a little soft and desaturated. Color never seems to really pop on the screen.  There are moments around the geodesic home where the textures do seem to sharpen, and in the film’s close-ups we are awarded with plenty of detail.  There is a unique look to the film that always gives us a feeling as though we are peeking into a conversation or a room where we don’t belong, whether it’s us looking at Meredith stealing a kiss from a boy, or us watching Sebastian through the glass of a fish tank, there are numerous shots where I feel as though we are more a voyeur than what we see in other films.  Perhaps it’s why the film feels more genuine, but it’s a look and style I can appreciate.

The DTS HD-Master Audio 5.1 track is strong and clear when it comes to the dialog, which is a good thing since the dialog is really the driving force of the film.  When the film gets to an underground punk show, it’s a sound overload that works well for the chaos of the moment.  The overall mix here is good. The punk music can be a bit loud and obnoxious, but that’s how it was intended to be.  The track is relatively standard for this kind of release.

Commentary with Director Peter Livolsi and Cast:  The interaction with Livolsi and his young cast keeps the commentary track going as they discuss the making of the film.  This is a track that is more for the fans of the film in case you wanted to know more about it.

Ellen Burstyn conversation with Peter Livolsi: ( 36:06)  I really enjoyed this feature. It’s not your standard Q&A but instead a fun interview between the director and Burstyn that covers everything from her real life relationship with Bucky Fuller to her experience in acting over the years.

NYC Premiere Q&A (29:45) This is a more standard moderated Q&A that followed the premiere of the film where the cast and director discuss the film. There are some minor sound issues with the microphones they used, but it doesn’t affect the presentation.

I really liked this film. I’m a sucker for a good coming-of-age film, and the mix of punk music was a welcomed addition.  Every year it seems there are so many coming-of-age films that hit the film festivals that many of the good ones get lost in the mix of big-budget blockbusters.  While this isn’t something I’d consider a classic, I do recommend this if you’re looking for a smaller, more intimate film to help decompress as the summer movie season comes to a close.

Brent Lorentson is a horror writer and film critic based out of Tampa, Florida. With a BA in Digital Film, he co-wrote and co-directed Scavenger Hunt. His short stories have appeared in various horror anthologies. In 2019 his short script Fertile Blood will be a part of the anthology horror film Slumber Party. He is currently working on his first novel A Dark and Secret Place set to be released in late 2019. Favorite Films: Taxi Driver, Fight Club, I Saw the Devil, The Wild Bunch, Dawn of the Dead, A Clockwork Orange, Pulp Fiction, Heathers, The Monster Squad, and High Fidelity.
Muppet Babies: Time To Play! Documentary Now! Season One & Season Two