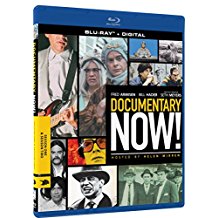 “We take a look back at the films that helped shape, change, and innovate the world of documentary.”

Between the rise of streaming services like Netflix and the growing number of nonfiction films making noise at the box office, documentaries have never been hotter…or more accessible. At the very least, they certainly don’t feel like the cinematic equivalent of eating your vegetables anymore. As a result, this feels the perfect time for Mill Creek to release the first two seasons of IFC’s obsessively hilarious comedy series Documentary Now!

“For the past 50 years, ‘Documentary Now!’ has presented audiences with the world’s most thought-provoking cinema.”

Despite the convincingly lo-fi intro that opens each episode, Documentary Now! is not a real show that you somehow missed on PBS. In the world of the show, Documentary Now! is a series that has been on the air for 50 seasons. Each episode celebrates a famous (fake) documentary that bears a striking resemblance to a real-life nonfiction film. Documentary Now! is hosted by Oscar-winning actress Helen Mirren, who appears at the start of each episode to introduce the film that is being examined/lampooned. (It’s likely that Mirren filmed all of her intros for each season over the course of a few hours.)

In real life, Documentary Now! is the brainchild of Saturday Night Live alums Fred Armisen, Bill Hader (the pair star in each episode), Seth Meyers (a former SNL head writer), and Rhys Thomas (who co-directed every season 1 and 2 episode of Documentary Now! with Alex Buono). I’ve always felt that the most successful spoofs/parodies are created by people who have a strong and genuine affection for the subject they are mocking. That is clearly the case with Documentary Now!

In addition to going to extraordinary lengths to mimic the visual and sonic style of each documentary — see the Video and Audio sections below — the performances and presentation are played almost completely straight. The humor largely comes from turning the absurdity up a few notches, like in Season 1’s “Sandy Passage” (a spoof that makes you realize how much Grey Gardens has in common with some found footage flicks), “Dronez: The Hunt for El Chingon” (a savage mockery of danger-seeking Vice documentarians), and “The Eye Doesn’t Life” (a Thin Blue Line spoof that has a field day with filmmaker Errol Morris’s dramatic re-enactments).

Overall, I feel like Season 1 of Documentary Now! was funnier and hit its mark more consistently than the show’s second season. Even when I wasn’t familiar with the source material being parodied — I’ve never even heard of Nanook of the North, so I went into Ep.3/“Kunuk Uncovered” completely blind — the creators found an amusing angle. (For “Kunuk”, it was a sheltered Eskimo becoming a moviemaking savant.) The one installment that fell flat for me was “A Town, A Gangster, A Festival” which chronicled an Icelandic town that hosted an Al Capone festival.

Fortunately, the season ends on a (literal) high note with “Gentle & Soft: The Story of the Blue Jean Committee,” a two-part spoof of History of the Eagles…and basically every other rock doc chronicling the rise and fall of a band. (Real-life rock luminaries and writers like Kenny Loggins, Daryl Hall, and Cameron Crowe drop by to lend an air of authenticity to the madness).

Armisen tends to take on the characters that are either sad sacks or irritating. The best example is his turn as the wrongfully convicted man in “The Eye Doesn’t Lie”…by the end of the episode, you understand why so many people were eager to sentence his Don Lentile to death. He’s also the underdog hero in The Story of the Blue Jean Committee, which allowed Armisen to show off his music chops.

Another season 2 offering — “Parker Gail’s Location is Everything,” which parodies Demme’s “Swimming in Cambodia” — also threatens to disappear up its own backside. But in spoofing Spalding Gray’s cinematic free association monologue, the episode eventually finds its comedic footing as Hader becomes increasingly manic and ridiculous playing Gray stand-in Parker Gail.

Hader — who most recently showed off his incredible range in HBO’s Barry, the hitman comedy he co-created — is just flat-out a great actor on top of being a gifted comedian. In Documentary Now! he leans into the creepiness of his lanky features and a voice that is simultaneously nasally and commanding. Hader gets a pair of showcase episodes in this second season: in addition to being on screen virtually the entire time in “Parker Gail’s Location is Everything,” the actor both narrates and stars in the two-part finale “Mr. Runner Up: My Life as an Oscar Bridesmaid,” which has some fun with old Hollywood and the sorts of movies that tend to win Best Picture.

Of course, there are also some very funny episodes in season 2, including “The Bunker” a parody of The War Room (which made James Carville and George Stephanopoulos household names) that allowed Hader to bring back his Carville impersonation. However, the best episode of the season — and arguably the series, so far — is “Juan Likes Rice and Chicken,” which is the show’s take on Jiro Dreams of Sushi. The episode takes pinpoint aim at overly precious and perfectionist foodie culture, but also contains some legitimately touching father-son material. Similarly, “Globesman” — a spoof of traveling salesmen documentary Salesman — concludes with an affecting scene of one guy helping out a struggling colleague.

Documentary Now! is (mostly) presented in its original aspect ratio of 1.78:1. The 1080p image is arrived at with an AVC MPEG-4 codec at an average of 35 mbps. Since every single episode is wildly different from the one that came before it, the visual presentation here is required to be absurdly versatile. Fortunately, this Mill Creek Blu-ray release is up to the task. Overall, colors are typically muted since most of the films that are parodied and parroted are over 30 years old. The closest thing resembling a modern HD presentation is “Juan Likes Rice and Chicken,” which flashes some fine detail during the close-ups of food. At the other end of the spectrum, episodes with black and white footage like “Kunuk Uncovered” or “Globesman” feature intentional blemishes like heavy artifacting. Black levels are impressively inky, which is especially important for installments with spare backgrounds like “Parker Gail’s Location is Everything” and “Final Transmission.” I also appreciated the shifting aspect ratio — which would occasionally shrink to 1.33:1 — depending on the documentary being spoofed.

The Linear PCM 2.0 stereo track might seem a bit puny compared to most surround sound presentations. But like most documentaries, the episodes here are heavily driven by dialogue and a stereo presentation is usually pretty adequate. (The most notable exceptions are music-driven parodies like “Final Transmission” and “Blue Jean Committee,” which could’ve used some extra oomph in their sound field.) Mostly, I was once again impressed by the attention to detail: the boxy sound of dialogue from older films is re-created perfectly here, most notably in “Globesman.”

Documentary Now! Season One & Season 2 features all 14 episodes on two discs. While I love the show itself, I’m sorely disappointed at the complete lack of special features. (Couldn’t we throw in a few trailers for the films being parodied? A commentary track or two? I’d love to see some behind-the-scenes material on the re-creation of the older films.)

Documentary Now! got in pretty early on all the current love for nonfiction films…so this set is the perfect chance to go back and discover (and chuckle at) some of the most famous past examples of the filmmaking form.