Posted in: Contests by Gino Sassani on October 11th, 2018 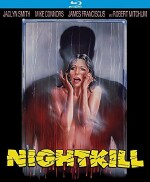 31 Nights Of Terror is a time for giving. That means contests and goodies for you guys. This time Kino has given us a copy of an old classic staring Jaclyn Smith, Robert Mitchum, and James Franciscus. It’s called Nightkill, and it’s been remastered for HD. And now you can check it out for yourself.

Gino Sassani is a member of the Southeastern Film Critic's Association (SEFCA). He is a film and television critic based in Tampa, Florida. He's also the Senior Editor here at Upcomingdiscs. Gino started reviewing films in the early 1990's as a segment of his local television show Focus. He's an award-winning recording artist for Omega Records. Gino is currently working on his 8th album Merchants & Mercenaries. Gino took over Upcomingdiscs Dec 1, 2008. He works out of a home theater he calls The Reel World. Favorite films: The Godfather, The Godfather Part II, The Body Snatcher (Val Lewton film with Karloff and Lugosi, not the pod people film), Unforgiven, Gladiator, The Lion King, Jaws, Son Of Frankenstein, The Good, The Bad And The Ugly, and Monsters, Inc.
“31 Nights of Terror” Puppet Master: The Littlest Reich (UHD-Blu-ray) (4K) Power Rangers: Chojin Sentai Jetman – The Complete Series