Posted in: Disc Reviews by Michael Durr on October 11th, 2018 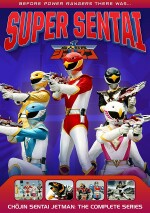 When you have done movie reviews for a very long time such as I have, you acquire knowledge about certain films and movies that in a normal life span one would probably never come across. One of those for me has been the Power Rangers series. I have reviewed several of the American adaptations for the site, and while they are not my cup of tea, I am familiar with how they work and operate. Last week, I received one of the Japanese original Super Sentai series, Chojin Sentai Jetman, and I was eager to check it out. Let’s see how this all unfolds.

The year is 199X, Sky Force’s Earth Ship orbiting the Earth are the guardians of peace on the planet. Suddenly an emergency is detected. It appears a robot has gone rogue and is terrorizing the ship. Ryuu Tendoh (played by Kotaro Tanaka) and Rie Aoi (played by Maho Maruyama) jump into action. Rie saves a baby, and Ryuu is able to turn off the robot which restores order to the ship.

Meanwhile, the Commander Aya Odagiri (played by Mikiko Miki) is very impressed by the two and ask them to join up for their Birdonic Waves program. The subjects of this program will be inundated with the waves and thus gain superhuman abilities and powers. This will allow them to further protect the world from the forces of evil. In addition, three other subjects will be recruited, thus making a team of five warriors to protect the world.

Ryuu is placed in the machine first and is able to absorb the waves and gain new powers. No sooner than that happens, Vyram, led by Radiguet (played by Daisuke Tachi) appear on the television screens across the world and space. Heck, they appear in the clouds and coffee cups too. They want to control the Earth, and their first act will be to destroy the Earth Ship as a show of their power.

The Earth Ship is attacked. In the blast, the Commander and Ryuu get to safety, but unfortunately, in a tragic moment, Rie is sucked into space never to be seen again. In addition, the Birdonic Waves machine goes haywire, and it strikes out towards Earth. It delivers four separate blasts to four separate people. Ryuu and the Commander must now find these four people who have superhuman powers so that they can protect the Earth from the Vyram together.

Meanwhile, a giant bug is on the loose terrorizing the planet. Let’s move on. One of the blasts hit Kaori Rokumeikan (played by Rika Kishida), a young heiress with lots and lots of money. Ryuu soon catches up with her, and she is eager to join the team. However, another blast hit a farmer named Raita Oishi (played by Ikko Tadano), who hates violence and is very reluctant to join the cause.

Suddenly, minions fighting for the Vyram warp into the farm and wipe out Raita’s crops. Well, that certainly got under the farmer’s skin. He has now joined the good fight. Ryuu pilots the Jet Hawk and is able to take out the rest of the minions and restore order. Ryuu has amassed two new partners in his quest against the Vyram. There are still two left that were hit with Birdonic Waves, but will they be found in time before it is too late?

As it turns out, the other two who will represent Black and Blue team members are Gai Yuki (played by Toshihide Wakamatsu) and Ako Hayasaka (played by Sayuri Uchida). The assortment of monsters and bad guys are really too numerous to go through beyond Radiguet, who is probably the most interesting. The show unravels fairly formulaic as the five heroes fight an array of evil characters as they go from episode to episode.

What perhaps makes Chojin Sentai Jetman different is a darker/mature twist on the Power Rangers/Super Sentai methodology. Tragic events occur, we get romantic love triangles, and other events that were beyond the typical cupcake affair of most of these series. That is probably also a good reason why this series has never been used in any American production.

Sure, the series has plenty of wacky moments and things that certainly scream Power Rangers/Super Sentai. It is funny at moments and filled with crazy action. But there are also times when you will sit there scratching your head and wondering why you are still watching this drivel. And then another two or three episodes pass, and another hour of your life is gone.

The show is presented in a 1.33:1 fullscreen television format. Old school television format. The show aired in the early nineties, and if you told me the eighties, I would have probably believed you. It’s pretty rough and has some really heavy grain throughout much of the broadcast. The colors are all right, and one can make out sufficient detail for a DVD, but I am guessing that the master was not in the greatest of shape. Presentation-wise, most die-hards probably will not notice, but anybody looking for a clear, sharp viewing experience are going to leave disappointed.

Audio is heard in 2.0 Japanese Dolby Digital Stereo with English Subtitles. Thankfully the English subtitles are really good, because much like the video, the sound is weak in my opinion. It is fairly clean, and one is not going to hear crackles or anything, but the sound effects are going to sound muffled at times. Most people will get by with the sound or just turn up their speakers higher than normal, but it is hardly going to impress. Again, I’m blaming more what Shout Factory had to work with and certainly not what they tried to do.

Chojin Sentai Jetman was one of the most popular entries into the Super Sentai universe. The romance drama of the show was often criticized and praised in the same breath by viewers and was responsible for adding a lot of fans who would not have normally watched the show. Shout Factory has done an excellent job of bringing the series to DVD, even if the show is just as silly as it always has been. Jetman plays a little different than most Sentai series, and therefore the viewer is rewarded with a stronger story.

The DVD package, unfortunately, though, is pretty bare-bones. The video and audio are sufficient for its age and preservation, but they are not going to be remembered. Neither is the complete lack of special features. This set is also not really that cheap, either, as it will run you around $43 at the time of this post. I do recommend this set to the hardcore fans, but casual fans of even the Power Rangers series probably want to Youtube a few episodes first before making the leap. Take care, my friends.

Disc One
Seek the Warriors
The Third Warrior
The Power of Five!
The Fighting Bride
Fall for Me
Get Angry, Robo!
Ryuu’s Marriage!?

Disc Six
Ryuu the Traitor
The Courage to Fight Given By a Dove
A Walking Appetite! The Antmen
The Birth of Emperor Tranza!
Sudden Hammer!
Spin, Roulette of Life

Disc Seven
It’s an Order! Change the Squadron
Transformation Impossible! The Base Destroyed
Sleep On My Chest!
Sneak Into the Commander’s Body
Demon Robo! Veronica
The Hot Milk of Victory

Disc Eight
The Great Demon King of the Tomato Field
The Glory of Emperor Tranza
A Kiss of Death
Maria…Her Love and Death
Battles to the Death
Flap Your Wings! Aviators!

Michael Durr has been reviewing movies for the better part of fifteen years now. He primarily enjoys thrillers, sci-fi, animation and even a little courtroom drama. His favorite films include Escape from New York, the Goonies and anything with Alyssa Milano. When he’s not praising Kurt Russell as the greatest actor of our time or scratching his head over a David Lynch flick, he’s spending time at home in Texas with his lovely wife, Lori and his amazing son. How they put up with him is a mystery, but even Basil Rathbone doesn’t have the time to solve that one.
“31 Nights Of Terror” Contest – Win Nightkill From Kino Classics The Catcher Was a Spy