Posted in: Disc Reviews by Jeremy Butler on March 29th, 2019 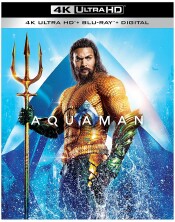 “My father was a lighthouse keeper. My mother was a queen. They were never meant to meet. But their love saved the world. They made me what I am: a son of the land, a king of the seas. I am the protector of the deep. I am … Aquaman.”

It’s been a rough year for the DC Universe, losing both Henry Cavill and Ben Affleck as Superman and Batman respectively. In a time when Marvel is heading towards a big finale of sorts, this should be when DC goes full steam towards capitalizing on any residual momentum. The loss of two members of the Justice League is going to put a crimp in that plan; however, thanks to the release of Aquaman, DC does not have to start from scratch. Jason Momoa returns as the titular character in this origin story of sorts. One of the breakout stars of the critical failure that was the Justice League movie, Momoa proves that he was made to command the seven seas.

Picking up a year after the events of Justice League, Arthur’s identity has become common knowledge, as he continues to protect the oceans from all threats, including sea pirates like David Kane (Yahya Abdul-Mateen II), while refusing to claim his birthright as the King of Atlantis, much to the chagrin of Mera (Amber Heard). In his absence, his younger half-brother Orm (Patrick Wilson) sits upon the throne and plots to unite the kingdoms of seven seas and launch an attack on the surface world. Unable to ignore the threat his brother poses to land, Arthur is forced to partner with Mera and his childhood mentor, Vulko (Willem Dafoe) to retrieve the lost trident of King Atlan, which could give him command over the oceans. To ascend to the throne, Arthur will have to confront memories that he has long since buried about the fate his mother suffered for loving a mortal and having him.

I have long awaited this solo opportunity to showcase Momoa as Arthur Curry, and I was not disappointed. As I mentioned earlier, his character was one of the bright spots in the deeply flawed Justice League mash-up. Momoa was an unusual casting as the comics always depicted Aquaman as a blonde, but truth be told, after seeing Momoa in the role, I can’t imagine it any other way. He brings an untamed and wild-man persona to the character that adds a layer depth that was not there before. Speaking of dream casting, I can’t not mention the lovely Amber Heard, who is a captivating and strong presence on screen. Normally a blonde, but I have to say, the red hair was really working for her. Beyond her beauty, though, she is the one who drives the plot forward, helping to motivate Arthur to protect the world he loves and encourage him that he is worthy to lead, or to put it in her word, “Atlantis has always had a king. Now it needs something more.”

Visuals were a huge part of this movie, as it is the first true opportunity that we are given to see the underwater world that is Atlantis, and it was gorgeous. Wan really put in some hard work to create an underworld kingdom that was not only modernized but also capitalized on the ocean theme. I encourage you to pay close attention to the emphasis that went into creating this world, as unfortunately we don’t get to spend a lot of time admiring it. So again, please pay attention to it so that it is not wasted effort on the part of the production staff. A special effect that I loved was the visuals of Mera utilizing her powers, especially in the wine bar; it was a really cool effect and showcased that the future queen of Atlantis would never have to be dependent on her king.

The storyline focused mainly on the “Throne of Atlantis” tale, which is the ideal selection for an origin story with the addition of showing the meeting of Arthur’s mother (Nicole Kidman) and father (Temuera Morrison). There are some variations on the original story, some good and some wasted opportunities in my opinion, such as the failure to capitalize on the chance to show just how devious Orm really is. You will know it when you see it. I think that was my biggest pet peeve about the movie, because it was the perfect chance to turn the tide (pun intended), and it is never addressed. All in all, the story is still good as is. A bit hokey towards the end.

I want to jump back onto the casting, as this will be a deciding factor in the film winning the weekend, which it is likely to do. Patrick Wilson was not my first choice when I thought about characters to play Orm, and he was clearly at least partially selected because of his working relationship with director James Wan; this marks the pair’s fifth collaboration. That said, he was great as Orm. He displayed ruthlessness, which again could have been more properly displayed if brought to the forefront. I believe that would have played better before than when they chose to end it. Finally, I want to talk about Yahya Abdul-Mateen II, who has come a long way from his cameo in Baywatch. I won’t say too much about his role because I don’t want to give too much away, but I had to take the opportunity say bravo.

Aquaman is presented in its original aspect ratio of 2.39:1, but this release also sports the IMAX footage, which was shot and presented here in 1.78:1.  The ultra-high-definition 2160p image is arrived at by an HEVC codec with an impressive average bitrate of 50-60 mbps. Much of the film was originally shot in 2K, with the notable exception of the IMAX footage throughout. The cool part of it all is that the transitions are so seamless that I had to force myself to really catch the switches. The image quality never changes, and the aspect ratio changes are no distraction. One of the weaknesses of the movie in general is what I like to call the George Lucas Syndrome. Often there are scenes so busy, so full of “stuff” that’s it is literally impossible to take it all in. But when you do focus on a particular image, you’ll find some wonderful detail even in peripheral elements. The HDR pops with a wonderful example of the superior color of Amber Heard’s bright red hair that stands out quite strikingly. The late Mantis suit is a wonderful study in excellent black levels as delivered in his shiny and inky black suit but also a wonderful example of tight contrast with the bright red eyes. I’m impressed with some of the white balance and detail as found in Nicole Kidman’s white costume. There’s a lot of texture and detail here, as in all of the costumes, but these details even stand out among shades of white. Character close-ups are stunning. The underwater sequences don’t always manage to suspend your belief, but this is a comic-book film, and some sacrifices are to be expected. Working in dry for wet isn’t easy, and it all boils down to the correct diffusion of light. There is an establishment shot when the characters go to Sicily that is simply breathtaking.

The Atmos track defaults to a pretty solid 7.1 mix. This is truly an immersive world in both the image and audio presentations. The surround mix is a very aggressive mix indeed. You get dolphin clicks, movement of water, and the hum of machinery throughout. The battle scenes draw you in close and intimate to the explosive action. It is here that the subs will shake a good theatre setup. They don’t just stick around for the big scenes. This one makes heavy use of subs throughout the film, and it maintains a steady thrum throughout the movie. There’s a distinct difference in underwater dialog and dry-land dialog. The dry dialog is strong and supported by the subs. The underwater dialog has a more celestial kind of quality which makes it easy to define the environment. The score is a rich bombardment of sound that does distract in small spots but usually times itself perfectly with the action on the screen.

The extras are all on the Blu-ray copy of the film. Sadly, no deleted scenes.

Becoming Aquaman: (13:03) Obviously this feature is going to focus on the character and Jason Momoa. We get to see him at various times in the process, from before he could let the secret out until his retrospective after the shoot where he’s remarkably laid back and calm considering that throughout the shoot he appears about as manic as one can. He approached the role with incredible energy and passion, and the evolution is all there for us to see here.

Going Deep Into The World Of Aquaman: (1928) This is the real behind-the-scenes feature. Of course, it focuses on the hectic schedule and all of the challenges of making something rather unique. You’ll see set construction, pre-viz, conceptual art, and a lot of energy from the cast and crew.

James Wan – Worldbuilder: (7:42) While the feature is centered on James Wan, he’s really there to introduce us to the various art departments that brought so much of this world to life.

The Dark Depths Of Black Manta: (6:39)  Actor Yahya Abdul-Mateen II gives us a close-up look at his character and the comic book origins as well as his tech.

Heroines Of Atlantis: (5:31) A look at the two leading ladies and their characters.

Villainous Training: (6:21) The two big bad guys show how they were trying to out-train each other to buff up for the roles and to go against Jason Momoa.

A Match Made In Atlantis: (3;12) Jason Momoa and Amber Heard sit down for a playful talk about their experiences together on the set.

Atlantis Warfare: (4:40) A look at the breakdown of Atlantis technology. You get to see conceptual art and behind the scenes of how this tech was designed and created. Focus is on the ships, weapons, and clothing.

Creating Undersea Creatures: (7:15) Get to see how all of these creatures were designed and created.

Aqua-Tech: (5:42) This feature is really about the filmmaking technology that had to be developed in order to make this movie. There’s use of VR and a process called Virtual Production where the monitors deliver the director pre-viz in live-time during the shooting of the live action.

Screen Study Breakdowns: (10:15) The feature takes three scenes and shows you all of the layers of f/x that were used to create the final scene.

Kingdoms Of The Seven Seas: (6:59) Dolph Lundgren gives us a lesson on each of the seven kingdoms of Atlantis.

It features a Raiders of the Lost Ark-theme treasure hunt and is full of action, along with woman empowerment. My wife has already told me that she expects me to take her to see this movie, and to tell you the truth, I’m not at all upset about seeing it again.

Jeremy Butler is a film school graduate of the International Academy of Design and Technology. He is been writing for Upcomingdiscs since 2012; however, movies have played a big part of his life for much longer. Favorite genres include horror, science fiction/fantasy, and comedy. Favorite movies are V for Vendetta, Boondocks Saints, Kiss Kiss Bang Bang, and The Godfather.
Us Dumbo (2019)