Posted in: Disc Reviews by Gino Sassani on September 11th, 2019 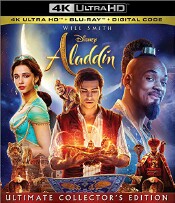 “I think it’s time I told you about Aladdin, the princess, and the lamp.”

There is very little new coming out of the Walt Disney Studios in recent years. For the last few years and into the near conceivable future, there has been a concerted effort by the Mouse House to remake as live-action films the vast library of animation classics. It pretty much started with the huge success of The Jungle Book, directed by Jon Favreau in 2016. The film did a wonderful job of bringing these jungle creatures to life through the modern-age miracle that is CGI. Somehow the film captured the very heart of the original animated feature and immersed us more fully into that world. No, it wasn’t the first time Disney recreated an animated feature with live-action releases. But it was so dominant at the box office that it appeared to set the mold for these conversions going forward. This summer Disney set an ambitious schedule, delivering no less than three of these remade films to the summer schedule. In March it was the tepidly-received Dumbo. In July it will be The Lion King, where Disney is playing with the most successful classic animation film in box office history, and eyes will be keenly on how that unfolds. With Elton John’s recent resurgence with a new Farewell Tour and the upcoming bio-film Rocketman, The Lion King might deliver Sir Elton a hat trick, or at least a large hat filled with money. Set between these two films is another Disney animated classic: Aladdin. Will that deliver the same three-point bounty to Disney this summer?

“Step one: rub the lamp. Step two: make a wish. Step three: there is no step three.”

The film begins the retelling by introducing us to the street thief, Aladdin (Massoud). He and his monkey Abu display a certain level of charm as they steal their way through the market place. It is in this setting that he happens upon a young woman who calls herself Dalia, and they make a connection. Of course, we know that the young woman is Princess Jasmine, who has taken some time to escape her fate at the palace, where she is being pressured to marry one of the many prince suitors her father has lined up. Fate appears to split them forever, until the villain Jafar (Kenzari) uses Aladdin in an attempt to steal a magical lamp from a dangerous lair. We know how that turns out. Aladdin ends up sealed in the cavern before he can deliver the prize, and once rubbed, the lamp reveals a genie, played by Will Smith.

From here on out the film follows the basic ideas of the animated film. The genie is sympathetic to Aladdin’s quest for Jasmine and attempts to help him win her over. They find themselves in the middle of palace intrigue, where Jafar is no longer content with being number two in the kingdom. He figures out Aladdin’s ruse and attempts to use the reluctant genie to destroy the Sultan (Negahban) and claim the kingdom as his own. It’s Aladdin to the rescue, with a little help from the genie, and all is set right in the world.

Guy Ritchie has had some bad luck of late. His interpretation of the King Arthur legend was not a good film. He has a certain style that works well when he’s doing the kinds of films that he does. Aladdin is no small exception to that rule. The film is awkward enough to keep the audience from being enchanted as we were with the animated film. The CG is too obvious here, and it distracts considerably from the experience. That comes as a huge surprise to me. No one has more CG cred these days than Disney, who now own the illustrious Industrial Light & Magic resources. Look at The Jungle Book or even Dumbo, and you see some of the most groundbreaking computer images in the history of the industry. There was no reason for this one to stand out from that elite crowd, but it does. I think the film was rushed for some reason. With two other remakes in the same season, it would have been better for Disney to hold this one back and spend more time on the production.

It’s not just the CG that makes this more or less a mediocre film. The acting is not good. Marwan Kenzari gives us a villain that won’t scare anyone. There’s nothing menacing within the character. Ritchie relies more on the f/x and booming audio to lift up his bad guy when he should have given us an actor who had that all inside of himself. I do pity Will Smith as the genie. He has impossible shoes to fill. He’s walking in the footsteps of a beloved and deceased actor who really did bring the animated character to life. I credit Smith for not going the Robin Williams imitation route. He made it his own, but the performance lacks a cohesive sense of direction, which again falls at the feet of Guy Ritchie.

There is, however, a very notable exception to the acting in this film, and that’s Naomi Scott. She plays Jasmine with a strength and passion that honestly makes anyone who shares the screen with her pale horribly in comparison. Disney would have been better off switching things up like they did remaking Sleeping Beauty from Maleficent’s point of view. This film would have been much better had it been named Jasmine. The inequity is particularly strong when she’s with Massoud as Aladdin. He might be a fair actor, but he can’t hold a candle to Scott. Her voice is also strong and impressive. There’s passion here that isn’t evident anywhere else in the film. It’s obvious that the powers that be discovered this at some point in the production, because they wrote a new song for this film for Jasmine, and it’s one of the most powerful couple of moments in the film. The song is used in a clever way at first a somber self-rebuke and in the climax as a weapon against the villain Jafar. It’s the new turning point in the story, and there can be little doubt that Naomi Scott makes this film worth watching. It’s pretty much a disaster without her.

Aladdin is presented in an aspect ratio of 2.39:1. The ultra-high-definition 2160p image is arrived at by an HEVC codec with an impressive average bitrate of 65-70 mbps. We even see peak numbers well over 100 mbps. The source material was shot in two different resolutions. The live action clocks in at a respectable 3.8K, and the boost makes a world of difference between the Blu-ray and UHD versions of the film. Textures reveal some nice detail that only adds to the exotic atmosphere of the film. Colors are vibrant and show off, particularly with the costumes. Close-ups also reveal some nice sharpness in the image. The f/x layers of the film were mastered at 2.8 K and still offer a nice upgrade from the Blu-ray. Nowhere is that more obvious than in the genie himself. There was a lot of negative reaction to early color tests of the genie, and I can see where some of that came from. The color on Blu-ray is quite different from the one presented here. It’s a rather silly Smurf blue on the lower resolution, and a much more solid and realistic color here. Of course, realistic is somewhat subjective when we’re talking about blue genies. Most of this improvement is owed to the HDR adding more nuance to the color. The HDR also gives us quite sharp night scenes and those in the cave. There’s much more shadow definition and just clarity in general.

The Atmos track defaults to a pretty standard 7.1 mix. It will not come as a complete surprise that the audio presentation comes alive best during some of the musical productions. A lot of this can be attributed to Naomi Scott’s dynamic voice and presence. I was surprised that it was the film’s highs rather than the lows that made this dynamic cut through the clutter and ring out. The subs do offer some nice moments, particularly when the cave is coming apart near the beginning of the film. The score also dominates in the highs, while dialog cuts through quite nicely throughout. Surrounds aren’t terribly aggressive, but they provide enough nuance that the overall presentation is immersive.

Deleted Scenes: (10:44) There are only six with a handy play-all option. They are in various stages of f/x completion.

Aladdin’s Video Journal – A New Fantastic Point Of View: (10:39) Mena Massoud was given a phone to record his experience while filming Aladdin. Most of this is more actual behind-the-scenes footage with stuff intercut from the actor as he interacts with the rest of the cast and crew.

Deleted Song: (2:20) Composer Alan Menken introduces this song and scene with incomplete f/x. It takes place when the princess is waiting for Aladdin’s promised moonlit meeting and sung by the characters as a duet but in separate places.

A Friend Like Genie: (4:31) This one starts with an emotional clip of Robin Williams in the recording studio for the animated film. The feature looks at the character, and Will Smith talks about approaching the role in the wake of the Williams’ version.

“There’s a lot of gray area in that wish.”

I respect that it isn’t easy to reinterpret an animated world and story with live actors even with the state of CG these days. There are different things that make each what they are. What they should share in common is heart. This is, after all, a love story in whatever form it’s being told. But you can’t have a good love story with only one passionate character, and that’s where this Aladdin fails. There’s no question that love for the original can taint the viewing of this kind of film. I know that will be a concern when I finally see the new Lion King movie. I love the original, and the movie will be unfairly competing with those affections. I enjoyed Naomi Scott tremendously and look forward to seeing her again. As for the story of Aladdin? “Only one may enter here. One whose worth lies far within. The diamond in the rough.”

Gino Sassani is a member of the Southeastern Film Critic's Association (SEFCA). He is a film and television critic based in Tampa, Florida. He's also the Senior Editor here at Upcomingdiscs. Gino started reviewing films in the early 1990's as a segment of his local television show Focus. He's an award-winning recording artist for Omega Records. Gino is currently working on his 8th album Merchants & Mercenaries. Gino took over Upcomingdiscs Dec 1, 2008. He works out of a home theater he calls The Reel World. Favorite films: The Godfather, The Godfather Part II, The Body Snatcher (Val Lewton film with Karloff and Lugosi, not the pod people film), Unforgiven, Gladiator, The Lion King, Jaws, Son Of Frankenstein, The Good, The Bad And The Ugly, and Monsters, Inc.
Young Sheldon: Season 2 Supernatural: Season 14 (Blu-ray)