Posted in: Contests by Gino Sassani on October 22nd, 2019 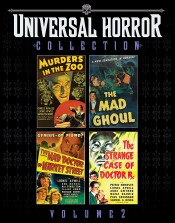 31 Nights Of Terror is still going strong, and our friends over at Shout Factory have given us something that’s really going to whet your chops. It’s The Universal Horror Collection Volume 2 on Blu-ray. You get four fantastic hidden gems from the Universal library. Three of the films feature Lionel Atwill, one of the underrated stars of that era’s atmospheric horror films. You get Murders In The Zoo, which is an old favorite of mine and features some of the creepiest scenes you can imagine. Some of this stuff could never be done today. The Mad Doctor Of Market Street, The Strange Case Of Doctor Rx and George Zucco in The Mad Ghoul. These are pristine masters, and each film gets its own disc.

Gino Sassani is a member of the Southeastern Film Critic's Association (SEFCA). He is a film and television critic based in Tampa, Florida. He's also the Senior Editor here at Upcomingdiscs. Gino started reviewing films in the early 1990's as a segment of his local television show Focus. He's an award-winning recording artist for Omega Records. Gino is currently working on his 8th album Merchants & Mercenaries. Gino took over Upcomingdiscs Dec 1, 2008. He works out of a home theater he calls The Reel World. Favorite films: The Godfather, The Godfather Part II, The Body Snatcher (Val Lewton film with Karloff and Lugosi, not the pod people film), Unforgiven, Gladiator, The Lion King, Jaws, Son Of Frankenstein, The Good, The Bad And The Ugly, and Monsters, Inc.
Vikings: Season 5 Volume 2 (Blu-ray) Night Hunter (Blu-ray)