Posted in: Disc Reviews by Gino Sassani on October 22nd, 2019 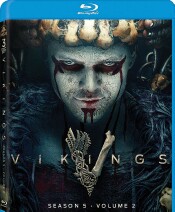 When Vikings started five years ago, I found it to be quite an ambitious task for a network that usually featured documentaries and reality shows about odd jobs. I approached this one with some caution. Now I’ve thrown caution to the wind for these compelling characters. I was particularly drawn into the lead. Travis Fimmel was outstanding as the Viking leader Ragnor Lothbrook. When his character was killed off after three years, I suspected things would be winding down for this experiment. I could not have been more wrong. Alex Hogh Andersen plays Ivar, his crippled son, who rises to be more powerful and more brutal that Ragnor ever was. The actor shares many of Fimmel’s characteristics, both in his physical look and the way he carries himself. It’s one of the most perfect father-and-son casting pairs I’ve ever encountered. Because of Andersen, the show has been reborn, and there’s still a lot of life in this series. The release of the first half of Season 5 is another strong contribution to your home entertainment library.

“People of Kattegat, I am Ivar, the Boneless. I am son of Ragnar Lothbrok. All hail your new king.”

This collection begins as Ivar (Andersen) has gained Kattegat and has declared himself the new king. But Ivar isn’t satisfied with that title. He takes a wife named Freydis (Agneson), and through her deception believes he will now have a child, which had long been thought impossible because of his condition. With this miracle, he declares himself a god, and rules with an increasing ruthlessness that eventually costs him the loyalty of his brother Hvitserk (Islo), who before sided with Ivar against his other brothers. It’s a decision he has come to regret.

In Wessex, Ubbe (Smith) wants to see his father’s dream come alive. He and Bjorn (Ludwig) along with Lagertha (Winnick) trust that Bishop Heahmund (Meyers) will not betray them. They return him and hope to regain the lands once promised by the Wessex king. Now a young new king has been crowned. Ubbe converts to Christianity in order to help King Andrew return to the Vikings the lands his grandfather promised. The king is willing, but has a condition. The Vikings must help him defend Wessex from an attack by another band of Vikings led by Harald (Franzen). But winning the land isn’t enough for Bjorn. He wishes to return to Kattegat and overthrow his ruthless brother.

The entire season deals with the usual ambitions and betrayals. Enemies join forces, and new armies are built. It is all leading to the brothers eventually coming together to defeat Ivar. The series doesn’t disappoint, with that epic battle taking most of the running time of the season finale.

The battles and schemes can get fatiguing after a while, and it appears creator Michael Hirst understands the need for some kind of relief and that is provided with the character of Floki (Skarsgard), who along with Lagertha are the only two remaining actors from the beginning of the series. Floki has brought his followers to what will one day be Iceland because he felt called by the gods. The land is barren and harsh, and he questions his own actions, as do many in his camp. It quickly becomes rather evenly divided, and we spend a little time following that story in each episode. At times it’s a rather stark complement to the main stories that are being played out, often on battlefields. But even that story turns violent as the two camps finally clash, and Floki finds he doesn’t have any control over the results. I’ve always liked this character and the actor who plays him. He’s a classic tragic character who is cursed by some kind of second sight, only to find he might simply be mad. He’s the most compelling character on the series and has come to the brink of death so many times that I’ve come to think of him as nearly immortal. Hirst loves to tease us with his impending demise only to find fate intervenes in some almost impossible way to lift him not only from death, but often to a more lofty position.

Each episode is presented in its original aspect ratio of 1.78:1. The 1080p image is arrived at with an AVC MPEG-4 codec. The high-definition image presentation is true to the broadcast quality and then some. You’ll appreciate the textures particularly. This is a rather dirty world, and the production design has coated everything in that layer of mud or dirt. The presentation delivers it. There are also some stunning vistas here, and the cinematography is something to behold. The transfer here delivers that painstaking effort. The image is sharp and crystal clear. The color palette is often cold. I’m impressed at how the show’s lighting gives us a wonderful indication of climate. Seasonal changes show wonderfully in the shape and quality of the light. Black levels are pretty much inky black. There is one instance of a serious flaw. A couple of the scenes in the French court during the attack on Paris appear to have odd focus issues. One instance was hard enough on my eyes that it started to cause a headache. I believe it is likely connected to the greenscreen work and an issue blending it into the set.

There are Deleted Scenes on each disc.

The Epic War Of Ragnar’s Sons: (8:01) This feature is pretty much a profile on each of the sons and where their journey has taken them up to this point.

The King And The Warrior Bishop: (6:17) A look at Andrew and Heahmund.

The show has begun to stray more and more from the historic aspects of these people and their time. I suspect that Hirst did not exactly expect the series to run this long and has had to reach deeper and deeper into fantasy to keep the show as compelling as it has been. And make no mistake. This series continues to completely demand your attention. It’s ambitious in its very scope and scale and continues to impress. How much longer he can keep up that intensity is beginning to be a concern. I wouldn’t be surprised if the sixth season isn’t the last. There is only so much history and drama can mingle before it becomes complete fantasy. Hirst has mined about all he can get from this particular scenario. “Here is the story of the world. Make use of it what you can.”

Gino Sassani is a member of the Southeastern Film Critic's Association (SEFCA). He is a film and television critic based in Tampa, Florida. He's also the Senior Editor here at Upcomingdiscs. Gino started reviewing films in the early 1990's as a segment of his local television show Focus. He's an award-winning recording artist for Omega Records. Gino is currently working on his 8th album Merchants & Mercenaries. Gino took over Upcomingdiscs Dec 1, 2008. He works out of a home theater he calls The Reel World. Favorite films: The Godfather, The Godfather Part II, The Body Snatcher (Val Lewton film with Karloff and Lugosi, not the pod people film), Unforgiven, Gladiator, The Lion King, Jaws, Son Of Frankenstein, The Good, The Bad And The Ugly, and Monsters, Inc.
Genius Party / Genius Party Beyond (Blu-Ray) “31 Nights Of Terror” Contest: Win Universal Horror Collection: Vol. 2 From Shout Factory