“31 Nights Of Terror” Night Of The Creeps

Posted in: Disc Reviews by Brent Lorentson on October 30th, 2019 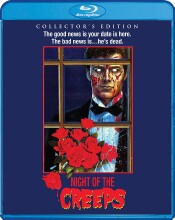 When it comes to catch phrases, at least in this household “Thrill Me!” is easily the most used, and it’s all because of Night of the Creeps. I’m not quite sure how many times I’ve seen this film, but for me, when you name off classic horror films, this makes my top 10.   I was only six when this film first came out, and I actually discovered it in the mid-90’s upon realizing it was directed by Fred Dekker who was responsible for The Monster Squad (the movie I blame and love for my introduction to horror). What I’m trying to get at is, I’m not sure if it is possible for me to be “objective” with this film.  Night of the Creeps is simply a film that is fueled with nostalgia, but I feel has aged better than most horror films from the 80’s. For those who are fans of the film, at least the ones I’ve met, can agree on the film’s awesomeness and its fun B-movie campy-ness that manages to toe the line perfectly between remaining fun while playing a homage to the old 50’s monster films while being a legit horror film.  Also there is Tom Atkins, who is a legend in my eyes because of this film.

The film opens up in space, where an experiment has gone wrong aboard an alien spacecraft, and one of the infected aliens manages to eject the experiment out of the ship, and it eventually finds its way to Earth.  It’s 1959, and the film shifts to black & white as we see a couple hanging out on a ridge.  It’s a scene we’ve seen before, and it gets better as the radio announcer gives a warning that there is an escaped axe murderer on the loose.  This opening could easily have been stretched into a full length film, and the sequence takes some fun twists that help set up the film.

Jumping ahead 27 years, we meet Chris (Jason Lively) and J.C. (Steve Marshall), who are friends and college roommates as they are going to frat parties and attempting to meet girls.  Chris and J.C. are the typical likeable losers we see a lot of in 80’s films, but the way Dekker writes these characters, he manages to give them both depth while making them likeable through great dialog.  The dialog in this film is almost too good for horror, and how it plays with the genre, it deserves credit for being as groundbreaking as it was, considering Scream piggybacked off this film but instead focused on the “slasher” culture.  Many will recognize the actor playing Chris from National Lampoon’s European Vacation as Rusty, and sure that film has a lot of fans, but I’ll always remember Chris for Creeps.  In many ways J.C. is more the leading man when we first meet the duo, as J.C. is the more take-charge guy and goes out of his way to help introduce Chris to the cute sorority girl Cynthia (Jill Whitlow), though they come to find out she already has a boyfriend.  How this leads to the boys deciding they want to pledge to join a frat but to get in the have to agree to do a certain prank…it’s absurd, but it becomes one of the best setups to kick off the events in a horror film.

Then there is Detective Ray Cameron (Tom Atkins), who is called in to investigate a murder that Chris and J.C. may or may not have played a part in. Things just spiral out of control as zombies are introduced, and the “creeps”, these black slug like creatures that feed on the brain. As the corpses keep piling up, Ray is having flashbacks back to the 50’s and how he was the man responsible for killing the axe murderer.  Is Ray able to keep it together, at least long enough to kill the threat to the college campus? As we see a unique bond develop between Chris and Ray, they become one of the more fun and dynamic duos of the 80’s.

“What I’m going to need is your standard flame thrower.”

When this film enters its final act and the fight is on between the zombies, the creeps, and those willing to fight, the film hits another level of fun.  Seeing Cynthia taking down zombies with the flame thrower and Det. Cameron going to toe to slug with “the creeps” is what makes this kind of horror film so much fun.  By the credits roll it feels too soon; I’m never ready to say goodbye to the film.

One of the fun bits involves an animal becoming a zombie.  Personally my favorite zombie animal was in the 1985 film Re-Animator, and there are some similarities in the film, not so much plot but the juggling of the tone with the comedy and horror.  There’s another 80’s film that I feel benefited from the release of Night of the Creeps and that would be Chuck Russell’s 1988 re-make of The Blob (yeah, I loved this one too).  In some crazy fantasy world I would have loved to see Night of the Creeps and The Blob cross over into an ultimate showdown, especially since their origins are in 50’s B-movie monster mayhem.  Getting back on point, the zombie and monster F/X here are great, and it reminds me how much better latex and animatronics are superior to CGI-dependent productions.  Sure, you can have a CGI zombie cat perform more lifelike motions, but there is something about the physical form that is more effective.  Another example is with the movements of the “creeps”. Sure, it looks silly at times, but I still feel seeing the physical form is more effective.  A moment that always gets a laugh out of me is when Cynthia is sitting on the steps of her sorority house having an intimate conversation with a “creep”-infected character that is vomiting the “creeps” behind her.  It’s a sight gag that may look fake, but after numerous viewings it still cracks me up.

Audio Commentaries:  There are two commentaries to choose from, one with the director and the other with the cast.  For fans of the film, these are a blast to listen to, and I’ve done so a couple times.  There are so many behind-the-scenes stories that are fun to listen to, though some you may rehear when checking out the bonus stuff.

Thrill Me! The Making of “The Night of the Creeps”: (1 hr) This is broken up into five parts and filled with interviews with cast and crew (the last part has interviews with fans of the film).  This covers the making of the film as well as the film’s legacy over time.

Tom Atkins: Man of Action: (19:55) This is an interview with the actor where he discusses his lengthy career in acting.

Deleted Scenes: (7:39) Here we have seven deleted scenes that haven’t been re-mastered and look a bit rough.  It is fun to see some of the scenes, but really, none of it was missed from either cut of the film.

Interviews with the Cast: (38 minutes) There are five interviews here; you can pick which you want to see.  The actors discuss their experience working on the film and how it’s impacted their lives.  Jason Lively, Allan Kayser, Ken Heron, Vic Polizos, and Suzanne Snyder are the actors you can choose to hear from.

Final Cut: Interview with Editor Michael N. Knue: (11:21) An interview with the editor discussing how he came onto the film and how it impacted his lengthy career.

Horrors Hallowed Grounds: (10:56) Here we get to see director Fred Dekker and actor Jason Lively return to many of the film’s locations and discuss their experiences and how things have changed.

The people at Shout and Scream Factory really put together a great edition of the film.  I have the 2009 release which replaced my old used and abused copy on VHS.  In 2009 I was so happy to have that release; it had been a decade since I had last seen the film.  I was already happy with the version I had in 2009, but this edition is pretty much as good as it gets. It has the same extras from the 2009 release, but this new disc has even more new material to go through.  For me this is definitely worth the double dip, and for those who never owned a copy or have yet to experience the film, stop what you are doing and get this film today and enjoy it.

Brent Lorentson is a horror writer and film critic based out of Tampa, Florida. With a BA in Digital Film, he co-wrote and co-directed Scavenger Hunt. His short stories have appeared in various horror anthologies. In 2019 his short script Fertile Blood will be a part of the anthology horror film Slumber Party. He is currently working on his first novel A Dark and Secret Place set to be released in late 2019. Favorite Films: Taxi Driver, Fight Club, I Saw the Devil, The Wild Bunch, Dawn of the Dead, A Clockwork Orange, Pulp Fiction, Heathers, The Monster Squad, and High Fidelity.
The Lion King (2019) (UHD Blu-ray) (4K) Ultraman: The Complete Series – SteelBook Edition