Posted in: Disc Reviews by Brent Lorentson on January 20th, 2020 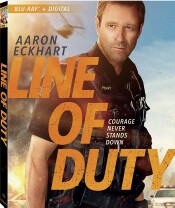 Back in the 80’s and 90’s it was a glorious time for crazy, over-the-top action films. The names that most notably come to mind when I think of this time in action cinema are Don Simpson and Jerry Bruckheimer.  They were the guys who knew how to make a popcorn action film: Beverly Hills Cop, Days of Thunder, Bad Boys, and many more. While Line of Duty isn’t quite in the same league of these films, it definitely has its roots in these films, and for a VOD action film, well, this film is all kinds of absurd fun.   Director Steven C. Miller has had some duds over the span of his career, though I did enjoy his take on Silent Night, but Line of Duty shows that the man is capable of helming a white-knuckle action film if given a proper budget and script to work with. When it comes to Aaron Eckhart, I’m kind of surprised we don’t see him as the lead in more tent pole action films.  Sure, many of us know him for his turn as Harvey Dent in The Dark Knight, but he’s a guy with so much untapped talent. It was nice to see it on display in this film. Frank Penny (Eckhart) is a disgraced cop who is responsible for getting a kid killed and is now stuck working as a beat cop.  It doesn’t take long for the film to ramp up as Frank is caught up in a foot chase with a suspect involved with the kidnapping of the chief of police’s daughter.  There is a lot of running in this opening act, and things go bad to worse for Penny when he’s put in a situation where he kills the only lead to finding the kidnapped daughter.

Miller does a good job at sucking us into Penny’s world and sympathizing with him, but the film unfortunately takes a miserable turn with the introduction of millennial, social media reporter Ava (Courtney Eaton).  Maybe I’m showing my age, but geez, was I annoyed by the introduction of this character. Even worse is the character Clover who runs the site Ava reports for.  I know it’s only January, but I’m quite certain the character Clover will be the worst character of the year, from her actions and dialog in the film, she’s basically the millennial character everyone rolls their eyes in annoyance over.

It’s no surprise that Frank and Ava don’t get along as she starts following him around and recording his every move. This only escalates when Frank decides it’s up to him to save the kidnapped little girl. Things get a bit absurd as the two work together to try to find the kidnapped girl, but thankfully there are plenty of car chases, shootouts, and fights to keep us interested.  Now the problem is everything is flowing nicely (at least for a B action film) till the film gets to the third act, and instead of ramping up, it just seems to plod along.  Having the film’s key villain played by Ben McKenzie is a fun choice (I do appreciate how both played a part in the Batman universe), but seeing McKenzie finally play a bad guy was a refreshing sight, and it’s obvious he’s having a good time  playing this role.

I get that they wanted to inject the social media perspective on this film, but it ended up being more of a distraction.  Had they gone the route that we saw in End of Watch where we see it unfold through their perspective, I think this could have been a stronger film.  Miller has stepped up his directorial chops with this film that is loaded with action and some really nice stunt work.

Line of Duty is presented in the aspect ratio 2.39:1.  The 1080p image is arrived at with an AVC MPEG-4 codec at an average of 28 mbps.  There are a few sequences where there are some matrixing issues, and the black levels are a bit all over the place, but all this can be overlooked, because it’s not too distracting. My issue is with the awful CGI in the third act.  CGI embers floating around just look awful and out of place, and really, that’s what took me out of the film more than anything.

The DTS-HD Master Audio 5.1 track is working overtime for this one.  From the foot chases, car chases and shootouts, this is an immersive experience, as we also getting a nice mix with the ambient city noise.  The dialog is clean throughout.  If anything you may want to turn it down so you don’t disturb the neighbors with all the action going on.

Commentary with director Steven C. Miller: Miller does a great job at keeping the energy up on this track by keeping it informative and filled with random tidbits of stories from the production.

Meaningful Action: Making Line of Duty (16:51) This is filled with some interviews with the cast and crew along with some BTS footage.

For a VOD action film this is pretty fun.  Sure, there are some annoying characters, but the shootouts, car chases, and fight scenes make up for it.  Aaron Eckhart really puts himself into this role physically and emotionally, and it’s nice to see him putting in the effort rather than just showing up for a quick paycheck.  This may not have a big budget, but there is a lot of well-executed action on the screen to keep you entertained for 99 minutes.

Brent Lorentson is a horror writer and film critic based out of Tampa, Florida. With a BA in Digital Film, he co-wrote and co-directed Scavenger Hunt. His short stories have appeared in various horror anthologies. In 2019 his short script Fertile Blood will be a part of the anthology horror film Slumber Party. He is currently working on his first novel A Dark and Secret Place set to be released in late 2019. Favorite Films: Taxi Driver, Fight Club, I Saw the Devil, The Wild Bunch, Dawn of the Dead, A Clockwork Orange, Pulp Fiction, Heathers, The Monster Squad, and High Fidelity.
Beverly Hills Cop 3-Movie Collection Maleficent: Mistress of Evil (Blu-ray)