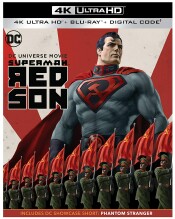 “Nothing wrong with a good diversion.”

As I write this review for the latest entry in the DC Animated Universe, the nation is going through a tough time. When terms like social distancing are becoming the norm, it’s nice to know that there’s stuff out there to help keep us from going stir crazy as we become more and more restricted to our homes. Box office films have been delayed, and some of the current films are being brought out sooner on home entertainment platforms to try to ease the isolation a little. While never slated for a theatrical release, one of the better titles to come out during this time is Warner Brothers’ Superman: Red Son. It’s a story that was told about 10 years ago in an animated film, but this one takes advantage of new technology and a multi-film story that has driven the last few years of animated feature releases. This isn’t merely a retread, but something far closer to the original comics story and provides a rather thoughtful as well as entertaining diversion just when we might need it the most.

The Elsewhere comic line was DC’s answer to Marvel’s What If… line. Both used the title to tell alternate history stories of their comic book universes. The idea is that a writer is encouraged to ask some of those fan-boy questions that we all used to argue about when we were kids. They took characters and events from their books and posed a philosophical question and then wrote a story to answer it. What if Superman’s spaceship hadn’t crashed in Kansas and he wasn’t raised by the Kents? What if instead his ship landed in the Soviet Union and he was raised to be a good comrade and serve the state with his powers? It’s the classic nature vs. nurture argument, and it plays out in Superman: Red Son.

Superman grows up under the direct mentorship of Stalin. He’s ignorant of the nation’s oppressive activities and grows to consider America an enemy of the people. Stalin uses his “Superman” to keep the population in check but also as a propaganda tool toward the West. It’s the 1940’s, and when America sees the “leaked” footage of Superman as a Soviet weapon, it scares them. Lex Luthor (Bader) sees this as his chance for power. He engineers a Soviet satellite to come crashing down on Metropolis, knowing it might bring Superman to the rescue. When it does, he retrieves the diverted space debris to get a DNA sample of Superman. In his rescue Superman also meets Lois Lane-Luthor (Acker), who gives him classified documents that expose the Soviet gulags and other oppressive activities. At first he refuses to believe until he investigates and witnesses it all for himself. He kills Stalin and becomes the new head of the nation. But he uses his power to inflict his will just as Stalin did, and with the help of an invading Brainiac (Williams) the two countries approach a hot war to replace the Cold War of history. The film takes us through the decades and gives us a glimpse of how this one historic change rewrites the history books.

Many of our Justice League favorites make their appearances but in very different ways. Wonder Woman (Marshall) is drawn to Superman and becomes his ally sporting a more red-themed outfit. Superman himself sports a hammer and sickle where the S symbol of the El family crest should be. Of course, she learns, too late, that it was a mistake. Batman (Smith) is also a Soviet citizen who becomes a terrorist trying to take the tyrant alien down. Let’s just say it doesn’t work out for him too well, either. Hal Jordan (Roiz) is one of an entire fleet of backward engineered Green Lanterns created through the discovery of a Lantern Corp crashed ship. They become the first line of defense against Superman. Lois is married to Lex, who eventually becomes President, an event that also happens within the main Superman titles over the years. Jimmy Olsen (Morris) is one of Luthor’s spies and becomes his VP. There are hints about other characters and how their lives have also been changed. The entire film is leading to a climactic showdown on the lawn of the White House.

The story isn’t new. It’s been around for decades and, as I’ve mentioned, has already been the subject of an animated series in 2009. There were 12 half-hour episodes, but this version is superior in pretty much every way, from a tighter more loyal story to animation that is light years away from the series for obvious reasons. That series also had a relatively unknown cast. This release has an incredible voice cast, and that’s one of the things that has been the strength of these films even the weaker entries. Amy Acker is perfect as Lois and is actually underused here. She’s one of the strongest voices Lois has ever had, and she makes the character that much more compelling. Jason Isaacs sells the Russian-accented Superman, and while I have loved Jerry O’Connell’s voice portrayal in this film series, this needed to be that much different. Paul Williams is still going strong after 60 years in the music and film industry. He gives life to the relatively lifeless Brainiac and gives the story the common enemy that no one quite realizes until the end of the film. I’ve loved Williams since he was writing Three Dog Night songs in the 70’s and appeared in ape makeup for the final film in the original Planet Of The Apes films where he played Virgil, a scientist-philosopher to Roddy McDowall’s Caesar. 80 years old and still commands a compelling voice that serves as one of this film’s strengths.

The animation is strong and bears an intentional resemblance to the old Soviet propaganda posters that were common in the Soviet Union from WWII until around the early 1960’s. It sets a pretty good mood for the film and sets it apart from the other films. That’s another thing I love with this series of animated features. The styles reflect the mood or theme of the film at times becoming very artful or film noir like Gotham By Gaslight. This might be a good time to binge the films as we await the final chapter coming soon.

Superman: Red Son is presented in its original aspect ratio of 1.78:1. The ultra-high-definition 2160p  image is arrived at by an HEVC codec with an average bitrate of 65-70 mbps. As the title suggests, red is the word and color of the day. Much of the film is steeped in a rather eerie red hue that provides atmosphere from the Soviet side of things. It suppresses much of the rest of the spectrum of colors throughout those portions of the film. It’s a pretty solid sense of where we are. The rest of the planet stands in sharp contrast, as colors are vivid and pop quite nicely. America has bright blue skies and deep green grass. The clothes are colorful and honestly portray a greater level of comfort. Even Superman gets a slight bump in color when he’s in the sky away from Soviet air space. Black levels are average and are corrupted by the red hue, but it’s a delicate tradeoff that I thing does serve the film well. Animation lines are clean and well-defined. I was disappointed to see what appear to be compression artifacts during several scenes particularly in the fight scenes. Heat vision looks pretty bad.

The DTS-HD MA 5.1 track is also a little bit of a disappointment. Warner Brothers has resisted an Atmos track in this line, and you pretty much get the exact audio presentation as you get on the Blu-ray release. Dialog and score are served best here. They stand out exactly as they should and were intended to stand out. There are a few times where the surrounds offered some ear candy, but the sound field is remarkably narrow for the most part. The subs are the worst letdown. There’s just not a lot of weight or power to even the most powerful action scenes. It’s certainly a below average presentation even for a Blu-ray. For a UHD release it’s just downright wrong.

DC Showcase – Phantom Stranger: (15:07) This is a nice little short that features one of the more obscure and older DC characters. It looks and feels a little like a Scooby Do episode without our favorite canine. The characters look and even sound a lot like those guys and are even introduced in a van. The story has a young woman named Marcy hooking up with some hippie cult members who are taking Marcy to see their guru. It turns out to be a bad day for Marcy as he’s (kinda) rescued by The Phantom Stranger.

Cold Red War: (16:57) This is a bit of an awkward feature. Participants talk about the actual Cold War amidst plenty of clips from the film. There are also a couple of California college history profs who sound, at times, pro-Communist and refer to the Cold War often as a big misunderstanding. Not even really sure what they’re trying to say, but I felt awkward during the entire time I watched it.

Superman: Red Son Motion Comics: (6:03) This has become a common feature on these titles. It’s a story within the film story that uses animated static comic pages much like the deleted scenes from animated features.

Sneak Peek – Justice League – Dark Apokolips- Apokolips War: (10:23) I love these sneak peeks. They get your anticipation for the next film really going. There’s plenty of clips and cast and crew insights. This one is intended to end this run and looks to be a huge film. Can’t wait.

Previews: Also included are the old sneak peeks of Death Of Superman and Gotham By Gaslight. Of course, they are out now.

From The DC Comics Vault: Another common feature here is to give you a couple of somewhat related television episodes. This time it’s the two-part episode of Justice League called A Better World.

Better than the average film in the series, it serves not only as a diversion for us just when we need it, but it also serves as a slight pause and diversion before this particular run of films is about to conclude soon. I gave it a test run so you can safely enjoy it from the comfort and safety of your own home. Kinda heroic, huh? ” I am no hero. I am merely a servant of the state who seeks, as you do, to better the lives of our citizens.”

Gino Sassani is a member of the Southeastern Film Critic's Association (SEFCA). He is a film and television critic based in Tampa, Florida. He's also the Senior Editor here at Upcomingdiscs. Gino started reviewing films in the early 1990's as a segment of his local television show Focus. He's an award-winning recording artist for Omega Records. Gino is currently working on his 8th album Merchants & Mercenaries. Gino took over Upcomingdiscs Dec 1, 2008. He works out of a home theater he calls The Reel World. Favorite films: The Godfather, The Godfather Part II, The Body Snatcher (Val Lewton film with Karloff and Lugosi, not the pod people film), Unforgiven, Gladiator, The Lion King, Jaws, Son Of Frankenstein, The Good, The Bad And The Ugly, and Monsters, Inc.
1917 (UHD Blu-ray) (4K) Star Wars: Rise Of Skywalker (UHD Blu-ray) (4K)