Posted in: Disc Reviews by Brent Lorentson on February 19th, 2021 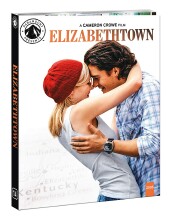 When it comes to Elizabethtown, I feel this is one of Cameron Crowe’s most divisive films.  Say Anything, Jerry Maguire, and Almost Famous tend to be at the top of people’s lists when they discuss their favorite films by the filmmaker.  Personally, Almost Famous is my favorite film by him, but Elizabethtown isn’t too far behind.  When it came out in 2005, the film seemed to get trashed by a lot of critics, but oddly enough, I didn’t care much about what they thought, Crowe at the time had a great track record for good films, and there was nothing that could sway me from seeing the film, except it was in and out of theaters pretty fast, so I had to see it on DVD.  It’s become one of my go-to films over the years, and I’ve found myself connecting to it more as I’ve been able to relate to various situations in the film (definitely not the near-billion-dollar fiasco Drew got himself in, thankfully).  Despite my love for the film, I can acknowledge it’s not without its flaws, so I’ll be as objective as I can be.

I’ll say right from the start my biggest complaint with the film is the story with Drew  Baylor (Orlando Bloom) working at a shoe company and being responsible for designing a shoe that will potentially cause the company to lose nearly a billion dollars.  For the most part Cameron Crowe is pretty good at creating relatable characters, but honestly, it takes a little time to warm up to Drew in this film.  He spends most of the first act brooding. The only time we see him smile is when he is successful in creating a bike he plans to use to kill himself, and that’s before he even finds out his dad has died.  I’m just simply not a fan of the first ten minutes of the film, but everything changes once Claire (Kirsten Dunst) enters the film. The use of “It’ll all work out” by Tom Petty and The Heartbreakers is one of the best uses of a song in relation to a character and to a story, and in this film music is so vital to the moments of the story.

Drew’s journey is simple: go to his deceased father’s home town to retrieve his remains and come back home, but it’s not so easy.  Elizabethtown, Kentucky is his father’s hometown and a place Drew and his father had always planned to visit but never ended up making the trip.  When we get to town, it’s like a hidden-away slice of Americana, with southern values and just as idealistic as a Norman Rockwell painting.

The character of Claire is somewhat of a legend in pop culture, after being labeled a Manic Pixie Dream Girl, a trope that’s always been around but became popular after Elizabethtown, Garden State, 500 Days of Summer, and several other films came out,  the label being given because these characters were considered unrealistic and simply used  to teach a male antagonist a life lesson.  Well, to be fair, there is some truth to this, but for the naysayers who deem these characters as bad or poorly written, I feel they are missing the point that it’s a romanticized notion for the male antagonist, but I feel the people who threw around the term in a negative way are simply too cynical and perhaps haven’t realized that there are simply good people in the world.  Whenever we get to see Drew and Claire together this film shines, and Claire’s optimism is a great balance to a lot of the brooding we see Drew handle while dealing with this father’s funeral arrangements.  The phone conversation where we get to witness Drew and Claire getting to know one another from night until early morning is one of those moments that feels so genuine. I’m sure plenty of people who have dated off the internet have had experiences very similar to this.  It’s one of those things Crowe is simply great at: creating honest moments with his characters getting to know one another.

Another aspect of this film where Crowe has always shone is having his characters endure the awkwardness of being in an unknown environment. With Almost Famous he brought in a geeky teenage writer into the behind-the-scenes world of touring with a rock band. Here we get to see Drew encounter his family on his dad’s side that he really knows nothing about.  Bloom does a great job at showing his unease of being thrust into this new family dynamic where it’s all well-intentioned but overwhelming.  This side of the story, getting into how even if someone is family they can still be strangers is something I could relate with.  These big family sequences are so well written and performed by the cast it just feels like moments ripped out of real life.  Surprisingly the actor that feels the most underused in the film is Susan Sarandon, who plays Drew’s mother.  She’s decided to stay back home in Oregon till Drew makes all the arrangements to have her husband cremated and brought home. She feels like an outcast because she “took” Mitch (her husband/Drew’s dad) from Kentucky.

What’s slightly disappointing is that a good portion of the film is building up to the family memorial for Mitch; this portion just didn’t work for me at all.  Sure, there are moments that are sweet, but it kind of gets a bit to over-the-top and gets in the way of the possible relationship between Drew and Claire.  The film just loses its momentum here for a bit. You’re expecting some strong emotional moments because it’s been building towards this, but it’s just underwhelming.  Then there’s the fact that no one seems to ask or care about Claire’s involvement with anything going on.  It just seems like a family that cares so much, wants to know all about Drew and Claire thrusts herself into his life … but is not mentioned or noticed by anyone?

Despite there being many directions this film takes us, from Drew losing his job, to getting to know his dad’s side of the family, to a relationship with Claire, the message is relatively clear about what matters in life.  It’s more profound than I feel Crowe intended it to be. The third act even shifts gears when it takes us on a brief road trip through America.  As much as I like the phone sequence with Drew and Claire, the film’s final act really brings it home.  It’s John Toll’s cinematography and the collection of songs that make this sequence work so well.  For those who haven’t seen the film, I won’t spoil what all is occurring in this final act, but this is up there with Crowe’s most memorable sequences.  Honestly, if the whole final act was stretched out to a full film, I would have been happy.

Elizabethtown is presented in the aspect ratio 1.85:1.  The 1080p image is arrived at with an AVC MPEG-4 codec at an average of 35 mbps.  This is a beautiful film, the cinematography from John Toll is mostly utilized in the film’s final act when Drew has his road trip “back home”, but the warmth of the visuals from the moment Drew arrives to Elizabethtown is fantastic.  A lot of detail is captured, from fabrics to the backgrounds, but it’s the richness of color that comes through beautifully.

The DTS-HD Master Audio 5.1 track is unique for me because this is one of the few films where I feel is strengthened by its music, and it’s one I prefer to turn up louder than usual, kind of like when you hear a favorite song on the radio.  At times the music is overpowering, but it’s typically in moments where the characters are experiencing an intense moment, everything from depression to joy.  The dialog comes through clean, and there is definitely some ambient sound mixing, but the main strength is in the music and the warmth of it.

Deleted and Extended Scenes: (23:49) Cameron Crowe introduces the scenes and explains the obvious reasons for them being cut. A lot of the scenes delve more into the fallout of Drew’s shoes and what eventually happened when they were released.  The best part of all these scenes is a mixture of a behind-the-scenes take and extended scene of one of the characters Drew meets on his road trip.

On the Road to Elizabethtown: (13:49) Here we get a look into what inspired Crowe to make the film and the characters.

The Music of Elizabethtown: (5:32) Crowe discusses the importance of the music in the film. Hits on why he chose Tom Petty and also how Elton John’s “My Father’s Gun” played into the film.

“Meet the Crew” Featurette: (2:35) A nice little montage of behind-the-scenes footage of several members of the crew on set.

“Training Wheels” Featurette: (2:21) Some rehearsal and test footage from various aspects of the film.

Despite some minor flaws, I absolutely love this film. It’s a film I dust off every couple of years and rewatch.  The soundtrack is easily one of my all-time favorite soundtracks; it’s what makes this film sort of the perfect hangout film for Valentine’s Day.  A movie to throw on and enjoy the music, and you can sit down and enjoy it during a date night.

Brent Lorentson is a horror writer and film critic based out of Tampa, Florida. With a BA in Digital Film, he co-wrote and co-directed Scavenger Hunt. His short stories have appeared in various horror anthologies. In 2019 his short script Fertile Blood will be a part of the anthology horror film Slumber Party. He is currently working on his first novel A Dark and Secret Place set to be released in late 2019. Favorite Films: Taxi Driver, Fight Club, I Saw the Devil, The Wild Bunch, Dawn of the Dead, A Clockwork Orange, Pulp Fiction, Heathers, The Monster Squad, and High Fidelity.
Freaky (Blu-ray) Greenland (Blu-ray)