Posted in: Disc Reviews by Gino Sassani on October 6th, 2021 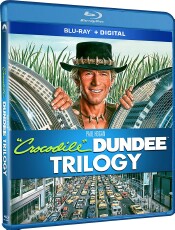 We first came to know Paul Hogan as the “Shrimp On The Barbie” guy. He was doing television and radio ads for Australian tourism. A smart fellow, he saw that the ad character was popular and rode an enormous wave of an Australian fad that hit America in the 1980’s. Suddenly there were Australian bands like Men At Work teaching us about vegemite sandwiches on the top of the music charts. We got steak, not shrimp, on our barbie with a chain of Australian-themed steakhouses appropriately called Outback “no rules, just right” started up by a Florida group. Pop culture became inundated with catch phrases like “no worries” and “G’Day”. Australia was cool, and we even had an “Australian” neighbor we all later found out was faking it for years. No doubt anything Aussie was considered cool. It was in that light that Hogan parlayed his tourism ads into an over-the-top Aussie character named Michael J. “Crocodile” Dundee.

The film was an almost instant hit. It pulled in a rather sweet $175 million at the domestic box office. Remember, this was a 1987 comedy with no real known American stars. Of course there was going to be a sequel. That film pulled in considerably less, but still a respectable $110 million. Those three films have now been brought to Blu-ray as a three-disc set from Paramount. The third film was called Crocodile Dundee In Los Angeles and tanked big time with an embarrassing $25 million box office total. That was 2001, and the Aussie fad has long since passed.

The first film also had its share of controversy. Paul Hogan and his inexperienced costar Linda Kozlowski fell in love, and her marriage was broken up by the pair who themselves married until recently. It didn’t seem to hurt the box office and might have actually helped. Dundee was a man who came and took what he wanted, and so it appears is Paul Hogan.

Reporter Sue Charlton (Kozlowski) has a cozy life. Her father owns the paper she works for, and she’s about to get engaged to the managing editor, Richard (Blum). She is sent to cover a story, but she ends up hearing about a more interesting tale. Local legends claim there was a man alone in the Outback fishing when his boat was attacked by a huge gator. Injured, he managed to crawl through the wilderness to safety. He spent days bleeding and surviving off the land. He now owns a tourist tour business where he shares his stories and takes unsuspecting tourists to the locations of his tale. The tale gets taller with each telling by the time she tracks down the man through his buddy and tour partner, Walter (Meillon). The stories might be exaggerated, but Michael J. “Crocodile” Dundee appears larger than life. He agrees to give her a private tour and tell her his story for a feature in the paper. He shows off some skills and some sights. In the Outback she falls for his charisma and somewhat animalistic charm. Here one of those golden classic comedy bits happens when Mick stops kangaroo poachers in the middle of the night. He picks up a kangaroo carcass and starts firing back at them. When I saw the film for the first time, I was laughing like crazy when one of the poachers yelled, “He’s got a gun!”

In New York, the story is a hit, and the paper wants to bring Dundee to the big city. He’s never been to a city, so we get the see the fish-out-of-water story once again. This time it’s Dundee who is not accustomed to the culture of America or New York. An attempted mugging brings us the classic “Now that’s a knife” line. Dundee is a modern Beverly Hillbilly, but from an even more alien culture. He hangs his clothes up to dry in his hotel room and sleeps on his bedroll on the floor. He tries to say hello to everyone he meets with mixed results. All the while he’s coming between Sue and her new fiancée. The result is predictable, but the romance is secondary to the laughs.

Could lightning strike twice? Almost. By now Dundee and Sue are a steady couple living in New York. Dundee is still trying to adapt and find something to his liking to do. The film continues to capitalize on the fish-out-of-water deal. One of the best here has Dundee in an office building where a guy is threatening to jump. He climbs out on the ledge and uses his own charm and wit to save the day. But the peaceful laughs are not to last.

One of Sue’s exes is a photojournalist who has uncovered a drug cartel killing. He captures the big man himself with his camera killing another man. He knows he doesn’t have a chance to get the film out, so he mails it to Sue. The bad guys are on to him, and they kidnap Sue and try to get Mick to deliver the film to them. Mick mounts a rather elaborate rescue, but the bad guys will stop at nothing to kill them both. There’s only one place Mick can keep her safe.

So it’s back to the Outback once again. This time they are running from the drug cartel guys, and Mick gets to demonstrate more of those cunning skills to outwit them and keep Sue safe.

Surprisingly, there’s still plenty of humor in a more serious film. In many ways this is a much better film than the first. There really wasn’t much of a story to tell in the original film. This one is actually pretty good and finds a logical way to bring the couple back into the world of the Outback. Hogan is even more comfortable in Dundee’s skin. Kozlowski will never be mistaken for a great actress, but she has this role down pretty well by now, and the two share obvious chemistry that was only just beginning in the first film.

Nearly 13 years later Hogan decided he had another Dundee tale in him. He didn’t. At least this wasn’t it. By then the schtick was pretty much played out, and the whole Aussie fascination had come and gone. The Shrimp On The Barbie ads were finished, and Hogan kind of drifted away into the sunset like all rough-and-tumble heroes must.

The film begins in the Outback, where Dundee is finding that his skills aren’t what they used to be, and he’s not able to keep up with the expectations of the tourists. He and Sue have a son now named Mike (Cockburn), and he’s growing up to be a chip off the old barbie. They are settled in when Sue’s father calls needing help. One of his top news people left, and he needs someone to cover the L.A. office for a while. So she loads up the family and they move to Beverly … Hills, that is. Swimmin’ pools. Movie stars. Here they revive the old fish-out-of-water material as Dundee has his requisite encounters with the locals, including another robbery attempt and a freeway mash-up over a skunk. Meanwhile, Sue is discovering that the story her former colleague was working on might be something sinister.

A new film company keeps making sequels of a film that never makes any money. She uncovers the true business of the studio, and Dundee gets a job as an extra and eventual animal handler to help her get to the bottom of it all.

The result is pretty much the same with a few stars thrown in. After all, this is Hollywood. Mike Tyson and George Hamilton offer the best cameos.

There are still rumblings that Dundee might return. Last year there was a tease of an announcement coming from Hogan, but it ended up being a slight return for a television ad. I wouldn’t totally discount it, but it has to be better than this, or it’s going to tank at the box office.

Each film is presented in their original aspect ratio. The 1080p image is arrived at with an AVC MPEG-4 codec at a solid 30 mbps. The high-definition image presentations are pretty impressive when you consider there hasn’t really been any restoration work done here. The temptation to wash all grain and print artifact with DNR and other over-processed methods has been resisted. So we don’t get flawless and perfect prints, but we do get prints that look more like the material did in the 1980’s. That means a sub-par presentation to many. Black levels are quite muddy. Colors are washed out with grain and a softness that was part of the film stock used. There are some moments where detail and texture shine through. Those are often mostly close-ups and some of the wilderness vistas of the first film. There’s nothing stellar here at all. It beats the DVD versions and is quite enjoyable, in any case.

The DTS-HD Master Audio tracks are not going to engage you like a modern film. It’s a 1980’s comedy, and dialog is all there really is to present. Surrounds on the second film are not aggressive in any way. There’s little sub response going on here. The score gets a few moments, and it’s certainly clean. That’s all you could really hope for with this material.

Just a couple of promo pieces.

Fads like Dundee himself live hard and die fast. It was a rather nice run, and a third closer to the first two films likely would have done pretty well. By 2001, Crocodile Dundee was in the rearview for most of us. This is about the best way to add it to your collection, and it is worth taking down for a spin from time to time. I’ve heard talk that Hogan might try it again. “Well, I wouldn’t hold that against him. Same thought crossed my mind once or twice.”

Gino Sassani is a member of the Southeastern Film Critic's Association (SEFCA). He is a film and television critic based in Tampa, Florida. He's also the Senior Editor here at Upcomingdiscs. Gino started reviewing films in the early 1990's as a segment of his local television show Focus. He's an award-winning recording artist for Omega Records. Gino is currently working on his 8th album Merchants & Mercenaries. Gino took over Upcomingdiscs Dec 1, 2008. He works out of a home theater he calls The Reel World. Favorite films: The Godfather, The Godfather Part II, The Body Snatcher (Val Lewton film with Karloff and Lugosi, not the pod people film), Unforgiven, Gladiator, The Lion King, Jaws, Son Of Frankenstein, The Good, The Bad And The Ugly, and Monsters, Inc.
Exclusive Interview With Ryan Kruger: Director/Writer Of Fried Barry No Time To Die