Posted in: Disc Reviews by Brent Lorentson on October 15th, 2021 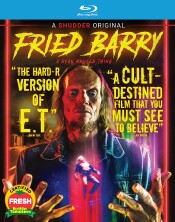 Fried Barry is definitely one of those fun quirky movies that needs to be seen to be believed.  One thing I should definitely say from the start is this movie is definitely not for everyone but if you are willing to go into this with an open mind well you just might appreciate this little gem ad for those late night drinkers and tokers, this is one that is fun to put on for those late night movie nights.  If you are looking for a high brow art film you’ve come to the wrong place and despite how the covert art suggests “A Hard R version of ET” well that’s a bit of a stretch in the ET department but this is definitely a film not for the kiddies but perfect for those high school film geeks looking for an outlet from woke society.  I feel like this is the kind of movie we need as the rest of the world is so scared about offending one another Fried Barry instead asks it viewers to kick back and prepare to get uncomfortable and enjoy the ride.

Gary Green plays the role of Barry, a quiet and not very likeable drug addict that happens to also be a terrible father.  Everything about Green goes against the mold of what a lead actor is supposed to be but it doesn’t take long before you realize how this man was born to play this part and I’m willing to bet this will make him a cult hero in the upcoming years.  Green doesn’t talk much during the film and it’s really his facial expressions, body movements and his eyes that drive this performance, while I’m not saying this is an Oscar worthy performance, on a physical level Gary Green has a physicality that I haven’t seen in quite some time.

As for the plot of the movie, it’s basically about Barry getting abducted by aliens and they create a Barry suit to wonder around Cape Town I suppose for the true human experience.  As we see Barry bounce around from one drug fueled sexual experience to the next this film started to remind me of The Girl From Starship Venus (1975) only that had a female alien doing the exploring.  The first third of this film plays out like a sci-fi sex comedy but I promise it does shit gears while dipping its toes in numerous genres that it does make it hard to really classify this film beyond psychedelic and simply bonkers.

On the technical side what is most impressive is how much of the effects are done in camera and the camera work in general.  Effects that range from an alien abduction, to an insane birthing scene to a grisly chainsaw kill, the film does some wild stuff and pulls it off with some nice camera tricks but the rest of the film is a visual treat that is nicely paired with a great techno heavy soundtrack supplied by Haezer.

Where the film is lacking is that it doesn’t have much of a story at all.  In the supplements the writer and director Ryan Kruger discusses how there wasn’t much of a script but instead a scene breakdown when they got started on the film.  While this isn’t a complicated story where it shows how there wasn’t much of a script in place is in the amount of shots that just seem pointless and do nothing more than to have Barry make weird expressions.  Sure it is entertaining at first but then it gets tiresome.  Then there is the issue of why is it everyone seems to want to have sex with Barry?  Do the aliens have him saturated in some pheromone that makes him irresistible because it reaches a point of absurdity at times with how everyone is throwing themselves at him and well let’s just say hygiene before and after the act doesn’t seem to be an issue.  But then again you don’t exactly watch films like this for the story.

Fried Barry is presented in the aspect ratio 2.39:1.  The 1080p image is arrived at with an AVC MPEG-4 codec at an average of 28 mbps.  For an independent genre film from a visual standpoint this is an impressive looking film considering just about all the effects were done in camera.  There are a lot of tracking shots and some psychedelic imagery that definitely help make this film look bigger than it is.  The color palate is relatively flat, color just doesn’t really pop though in contrast we do get some nice detail in various shots that show off just how unappealing Barry can be,  For  an independent film this does a serviceable job but nothing will wow the audiences here.

The 5.1 DTS –HD Master Audio track is a bass heavy experience mostly thanks to the techno heavy score by Haezer.  The score is what helps drive this film and it pairs nicely with the numerous trippy visuals throughout the film.  The dialogue is difficult to understand at times but subtitles are used to help remedy that issue.

Filmmaker Commentary: This has the director Ryan Krugar with other members of the crew discussing the making of the film.  For fans of the film this is relatively entertaining but it’s a far cry from being informative if you are looking to hear tips on making your own film.

The Making of Fried Barry: (14:42) Here we get to listen to the director and members of the crew discuss how the film came together.

Fried Barry- Behind the Scenes: (3:54) A collection of clips with footage of the making of the film.

Fried Barry-The Short Film: (3:54) Here we get to see the short that started it all.

Deleted/Alternate Scenes:  There are six scenes with no “play all” option.  Really the only one I felt was worth checking out is the Drug Guru sequence.

Outtakes: (4:03) A collection of flubbed scenes and standard goofing around on set.

Barry Advertisements: There are 3 brief ads that involve Barry promoting some questionable items.

“How To” with Barry: This might be the funniest thing on the disc.  Here there are 3 Sex education videos where Barry demonstrates various acts.

At the end of the day this film is fun and I’m sure with time will get a cult following.  What I find most promising is what Ryan Kruger can deliver with actual polished script and a solid cast.  As first films go this is a promising start for a genre filmmaker and with Shudder putting this out it will definitely get attention.

Be sure to check out the interview between Gino and the writer/director Ryan Kruger which is also posted on the site. http://lwreptiles.com/Special/RyanK.mp3

Brent Lorentson is a horror writer and film critic based out of Tampa, Florida. With a BA in Digital Film, he co-wrote and co-directed Scavenger Hunt. His short stories have appeared in various horror anthologies. In 2019 his short script Fertile Blood will be a part of the anthology horror film Slumber Party. He is currently working on his first novel A Dark and Secret Place set to be released in late 2019. Favorite Films: Taxi Driver, Fight Club, I Saw the Devil, The Wild Bunch, Dawn of the Dead, A Clockwork Orange, Pulp Fiction, Heathers, The Monster Squad, and High Fidelity.
Universal Classic Monsters: Icons of Horror Collection (UHD Blu-ray) (4K) The Nevers: Season 1 Part 1