Posted in: Disc Reviews by Brent Lorentson on October 28th, 2021 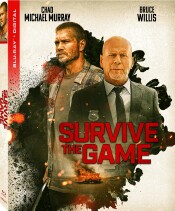 No, this isn’t a remake of the 1994 Ice-T Surviving the Game. Unfortunately, this is yet another low-budget action film starring Bruce Willis that has this reviewer wondering if we’ll ever get a great film out of Willis ever again. For the past few years it seems Bruce Willis has given up doing A-list films and has instead gone the route of straight-to-disc releases, and the films have ranged from tolerable to garbage. This is frustrating, because I think we can all agree he’s better than this, but he seems to be fine cashing the paychecks and going onto set and looking miserable from one scene to the next. I miss seeing Bruce Willis being the average-Joe badass. The Last Boy Scout? Heck, at this point I’d rather see him in a Hudson Hawk revival, but alas, this seems to be what we’re stuck with.

The plot is relatively simple. David (Willis) gets injured and is taken hostage after a drug bust goes wrong. Cal (Swen Temmel) follows members from the failed drug bust to a farm, and their confrontation draws the attention of the property owner, Eric (Chad Michael Murray), an soldier who’s been awarded the Purple Heart but is grieving the recent loss of his wife and child. The setup isn’t all that bad, but it’s the initial drug dealers we see Cal having to confront that are just a taste of the cringe-worthy performances and dialog that’s to follow. This could have worked if the two criminals were just a pair of dumb, love-struck criminals. They’d still be annoying, but it’s at least believable that all they were good at is knocking over gas stations and stealing cars, but instead they are connected to a major drug cartel that David and Cal have been pursuing for years. Where this takes a turn for the worse is when more of the gang arrive, and they are comprised of a ragtag group of idiots who belong on an episode of The World’s Dumbest Criminals. Trying to take control of this crew is Frank (Michael Sirow), who seems to be the only professional who has any brains and menace, but in contrast to the rest of the crew, it just makes everything all the more absurd.

The moments with Eric and Cal working together are really some of the film’s only bright spots, though why Eric decides to wait so long to discuss his military training is beyond me. For a film called Survive The Game, this is a title that just doesn’t fit at all. It’s just bad guys versus good guys shooting at each other till the “big boss” arrives. Oh, and when the big boss arrives, prepare to be even more underwhelmed.

What is fairly entertaining is watching the bored expression on Bruce Willis’ face during many of the dialog scenes where the characters think they are in a Quentin Tarantino film. I mean, some of the dialog here is so strained and groan-worthy that I wasn’t sure if I was supposed to be laughing or not. The bad dialog aside, when the film just focuses on the shootouts and fight scenes, it’s not so bad.  As for the car chases, wow, it’s as though they filmed the scenes and just used one spot to film “exciting turns” but reused the same spot and just moved the camera angle. I mean, it’s pretty bad.

Surprisingly, this isn’t the worst film I’ve seen this year, but I wouldn’t say this one is good either.  This is the action film equivalent to a Troma film, meaning it has its charm for being so bad, but I’m not sure if anyone would ever say it’s so bad it’s good.  Someone please give Bruce Willis a better role. I don’t think I can handle much more of this.

Survive The Game is presented in the aspect ratio 2.39:1. The 1080p image is arrived at with an AVC MPEG-4 codec at an average of 30 mbps.  Considering the entire film takes place during daytime hours, it appears a lot of natural lighting was used, and that works to the film’s benefit with the location.  The greens pop here, and there is a good amount of detail to capture all the stubble and facial hair.  The film does look good, and that’s just about one of the only saving graces for it.

The 5.1 DTS –HD Master Audio track is pretty standard for this kind of action film. The mixing with the gunfire is effective where it does give the viewer a sense of spatial distance for gunfights happening off screen. Ambient sound is definitely used to make lackluster car chases seem bigger than they are. The dialog is clean and clear throughout as well.

Honestly, despite how bored Bruce Willis looks in this, he still manages to carry this film. This could have been decent with a few script rewrites and better casting, but everything about this film screams lackluster, and I feel everyone signed on for the paycheck and a hotel room at the end of the day.  I’d say pass this film and go watch Hostage (2005), one of the last great films Willis was in.

Brent Lorentson is a horror writer and film critic based out of Tampa, Florida. With a BA in Digital Film, he co-wrote and co-directed Scavenger Hunt. His short stories have appeared in various horror anthologies. In 2019 his short script Fertile Blood will be a part of the anthology horror film Slumber Party. He is currently working on his first novel A Dark and Secret Place set to be released in late 2019. Favorite Films: Taxi Driver, Fight Club, I Saw the Devil, The Wild Bunch, Dawn of the Dead, A Clockwork Orange, Pulp Fiction, Heathers, The Monster Squad, and High Fidelity.
Dune (2021) Superman & Lois: The Complete First Season (Blu-ray)