Posted in: The Reel World by Jeremy Butler on December 23rd, 2021 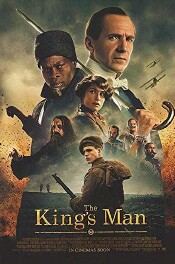 This is an origin story. That is the best way I can sum this movie up. I will repeat it again, so it is clear. This is an origin story. It was hinted at in the first film (Kingsman) how the Kingman intelligence agency was started; however, while it was excellently explained by Colin Firth, how the agency truly came to be was just sort of glossed over. With The King’s Man we get to experience the tale of the organization’s founder and his motivation for creating the organization. The story is informative and at times entertaining, but I must confess that it was missing the wit that the original film had. I would have to characterize this as a case of the original film being the best. In this instance, it is because of the wit and the manner in which the story flowed. I know what you are thinking, I’m disregarding the second film, and you are right; I am. In the case of Kingsman 2, I found it to be an unjustifiable and unnecessary sequel. Plus, the film pretty much lost me the moment that they came up with convoluted explanation for how Firth’s Harry Hart/Galahad managed to survive a bullet to the head at point-blank range. No offense intended to Mr. Firth, as I loved him as that character, but that was just bad storytelling. Then there is what they did with Mark Strong’s Merlin, but I’m getting off track.

In The King’s Man, we meet the man who started it all, played by Ralph Fiennes. Fiennes is an established English actor of the highest order; you need only look at his resume to see that. I mean, he’s been a part of several franchises to include Harry Potter and more recently the Daniel Craig-led James Bond films. Now he has a chance to be part of another franchise. Unfortunately, I don’t imagine there will be much potential in a continuation of his character. Not through any fault of Fiennes, but merely because this film was clearly intended as a prequel and additionally, the story wasn’t strong enough to warrant a return in my opinion. To its credit, the film accomplishes the goal it set out to accomplish: it establishes the agency’s origins. Outside of that, I just don’t see a reason for a continuation. To my mind, this actually argues for a conclusion of the franchise. I just can’t imagine a scenario where this series needs to continue.

Through Fiennes character we explore the motivation that prompted the creation of world’s first independent intelligence agency. In a nutshell, the agency’s fate was tied to his relationship with his son. I didn’t fully grasp that until the end of the film, and if you recall Firth’s words from the original film, you will have a measure of foreshadowing for the fate of said relationship. It is a story about a father and son, and in truth, while watching, I forgot that this film was actually a prequel to the franchise. There just didn’t seem to be a direct connection to the other films. This ruined a bit of the film’s overall appeal for me, because the first two, as I mentioned earlier, possessed a degree of witticism and humor. The tone for this film is much darker, and it evoked a belief that it did not belong in the same franchise as the other two.

On its own, the film is enjoyable, so you if watch it under the pretense of it being a solo film instead of a larger franchise, you may be able to enjoy it better. I did miss the humor, though. The film does make several attempts at levity, specifically the Rasputin scenes, but these come off satirical and over-the-top more than anything else. To the film’s credit, it did manage to catch me off guard at one point in reference to one character’s overall fate. I didn’t see it coming, nor could I have foreseen the manner in which it was done. For that, the film has my respect, as it gave me a genuine moment of surprise, and I always enjoy those.

However, when it came to the reveal of the big bad, I saw that coming from a mile away. I was intrigued how they set it up, with the villain working in the shadows and taking care to keep his identity shrouded until the big reveal, but from the very beginning, I had my suspicions, and they were accurately confirmed. When it comes to villains, this franchise has been starved for a compelling one since the first movie. Granted, Samuel L. Jackson is a tough act to follow, but I think the crux of the issue has to do with the villain’s motivation. In this case, I do not believe that the motivation was adequately explained. I mean, something prompted the villain to stoke the fires of a world war, but either it was not made completely clear, or I just missed it.

In closing, there are some elements of the film to enjoy, but there are also some parts that make the film not in the league of its predecessor. I would rate it above the second film, but not the first. That just goes to show you that the original is usually the best.

Jeremy Butler is a film school graduate of the International Academy of Design and Technology. He is been writing for Upcomingdiscs since 2012; however, movies have played a big part of his life for much longer. Favorite genres include horror, science fiction/fantasy, and comedy. Favorite movies are V for Vendetta, Boondocks Saints, Kiss Kiss Bang Bang, and The Godfather.
Venom: Let There Be Carnage (UHD Blu-ray) (4K) The Many Saints Of Newark (Blu-ray)