Posted in: Disc Reviews by Brent Lorentson on December 24th, 2021 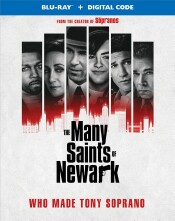 In 1999 when The Sopranos first premiered on HBO, I don’t think anyone was expecting just how much it would change the television landscape. In its run it made cable TV a main contender for the Emmys, but it also changed the way we see TV, as it took the gangster movie dynamic and stretched it out into a series that ran successfully for 86 episodes. Then there was the way the series came to a close that has had fans and critics talking nearly 15 years after it last aired. It’s the show that raised the bar for what television can be and has been the standard since which only a handful of shows have been able to match in quality. Personally (and I know this is a controversial take), I’m only a fan of the first three seasons, but even a bad episode of The Sopranos is better than most television shows out there. There was talk for a while about spin-off shows and possible movies. This kind of talk would of course get fans excited, but the question always was, where can you go with the story? Then in 2013 when James Gandolfini died, it seemed like any possible revival was squashed.

Whenever I hear about a show or film wanting to do a prequel, I immediately think of what happened with the prequel trilogy with Star Wars. We all got excited; it was Lucas in full control, and he’d be telling us the story of how Vader became the big bad Sith in the galaxy far, far away. How did that work out for us fans?  Now, granted, a film talking about how Tony Soprano became the gangster he would evolve to be is a very tempting idea. Then when you see how much his son Michael Gandolfini looks like his dad, man, it seems like a sure thing. Sometimes things should be left alone. Heck, we all expected the spin-off film El Comino following Jesse from Breaking Bad would be good, and how did that turn out?  How about that Entourage film? I mean, there are so many examples that should have prepared us for this, but we all just wanted to believe that David Chase could surprise us all and deliver us just one more serving of the crime family we all love.  The problem is he teased us all with the promise of one story, and instead he threw in so much more that no one wanted or cared about that he practically pissed all over a sure hit in the process.

The Many Saints of Newark starts off by introducing us to the old Moltisanti family with a narration by Christopher (Michael Imperioli). There’s “Hollywood” Dick (played by Ray Liotta); then there is his son Dickie Moltisanti (played by Alessandro Nivola). When the film opens, “Hollywood” Dick is coming off the boat from a vacation to Italy, and he’s returned with his new fiancée, Giuseppini (Michela De Rossi). It’s obvious that his son is attracted to her. There’s plenty of awkward sexual tension going on here, and we know inevitably Dickie is going to make a move on his new mother-in-law, and when this happens, well, it provokes one of the more violent scenes in the film, and it’s done in a way that reveals the true character of Dickie Moltisanti, a violent gangster who doesn’t seem to realize or accept who he is. Over the course of the film we see him commit a lot of unsavory acts, but he seems to think these can be washed away by performing minor acts of kindness. Sure, it makes it so that we don’t completely loathe the guy, but it does make him hard to root for in any way.

Then we have Harold McBrayer (Leslie Odom Jr.), who is a runner for Dickie. He’s wanting to make a name for himself, but this is the 60’s and he’s black, so this is heavily frowned upon. As much as the trailers hype this movie to be about “the rise of Tony Soprano”, if anything the film is really about the rise of Harold from becoming a simple runner to becoming a full-on gangster with a considerable amount of power. It’s the feud between Harold and Dickie that drives this film, and while it’s entertaining, it’s definitely misleading.

So just where does little Tony Soprano fit in to all of this? Well, they cut to him in two forms. We see him as a young kid in the first half of the film; at one point we get to see more about how Tony discovers his dad is a gangster. Then in the second half we see him as a teenager, played by Michael Gandolfini. The time spent with the Soprano family isn’t much. Instead it feels like halfhearted fan service rather than telling us a story. Tony basically looks up to Dickie as a father figure because his dad Johnny (Jon Bernthal) is in prison. The relationship with Dickie and Tony had lots of potential and could have evoked A Bronx Tale vibes, but instead it just comes off as uninspired, and damn, that third act when Dickie is ignoring Tony is like watching a bad teen soap opera where the main couple breaks up.

The bright spot in this film is the casting for Junior Soprano (Corey Stoll). He is brilliant in the role. He has the look and the character down, and I wish we had more of him.  Then there is Livia Soprano (Vera Farmiga). This is a role that I was worried about. In the show I think we can all agree she is a terrible human being, and what Nancy Marchand did with this role is virtually untouchable, she was so great in this role. Vera Farmiga managed to somehow tap into this character, and I love what she does with it.  And then there is Michael Gandolfini. He would have made his father proud. Though he doesn’t have much of a resume, he really brings this character to life, and I wanted to spend more time with him seeing him getting into trouble  and becoming a little hoodlum.  He has the talent and presence to give us the young Tony Soprano we wanted to see, but unfortunately that’s not at all what this movie is about, and that’s a shame.

To be blunt, this film is a mess. It has so much going on that the obvious move would be to cut the stuff not about Tony and Dickie and expand on their relationship. Instead so much is injected into this film but isn’t given enough time to flourish and breathe. Had this been given perhaps a brief series of six episodes, all the plot threads would have had plenty of time to flourish. Then there is the overall look of the film, this heavily saturated look with greens and blues to give it a cold look. It doesn’t even visually fit with the show; it plays like a terrible flashback. Even with the scenes of violence, they don’t feel earned, like with Dickie and Harold and their shootout in the bar. It’s random and just feels out of tone with what we’ve been watching. Then there is the casting of some of my favorite characters in the showz; Paulie, Big Pussy, Sal … geez, these performances come off like bad Saturday Night Live sketches and border on insulting.

While I’m not the biggest fan of the series, I’m a big enough fan to feel slighted and insulted by this film. This isn’t the film they marketed, and I doubt this is the film fans hoped for or expected. Sure, this is David Chase’s baby, but I feel he does owe something to the fans since he decided to go through with this project. Otherwise I wish he’d just left well enough alone.

The Many Saints of Newark is presented in the aspect ratio 2.39:1. The 1080p image is arrived at with an AVC MPEG-4 codec at an average of 30 mbps. While I’m not a fan of the color grading for the film, it definitely sets the film apart from the TV series. The blue and green filters along with the saturation prevent many colors from having much vibrancy. As for the detail, that looks great when it comes to the costumes and locations.  The skin tones seem a little light, but it’s nothing that is distracting.

The Dolby Atmos track does deliver when it comes to adding scope and depth with the audio. The scenes with action really come alive, and the bass is put to good use; the same can be said for the riot sequence. The dialog is clear throughout the picture.

The Making of Newark: (13:07)  A bit too much of this is spent with the cast discussing how great the show and the characters are rather than focusing on the film.  The interviews with Michael Gandolfini are pretty much my favorite bits.

Sopranos Family Honor: (5:36) Once again we have a segment that is more focused on the characters in the show instead of the film. It’s not bad, but it’s not really needed.

Deleted Scenes: (5:26)  There are only three scenes here, and honestly, I wish they were all left in. It’s simply more with teenage Tony, and considering it’s only about five minutes, I don’t see the harm in putting the scenes in.

I still feel a bit bamboozled from the marketing of this film, how they marketed it as an origin story for Tony Soprano when really he’s just a background character. If you go into this as a standalone film and know nothing about The Sopranos, I feel it will be a more enjoyable experience. While I don’t hate the film, at the end of the day it just feels so unnecessary and a wasted opportunity.

Brent Lorentson is a horror writer and film critic based out of Tampa, Florida. With a BA in Digital Film, he co-wrote and co-directed Scavenger Hunt. His short stories have appeared in various horror anthologies. In 2019 his short script Fertile Blood will be a part of the anthology horror film Slumber Party. He is currently working on his first novel A Dark and Secret Place set to be released in late 2019. Favorite Films: Taxi Driver, Fight Club, I Saw the Devil, The Wild Bunch, Dawn of the Dead, A Clockwork Orange, Pulp Fiction, Heathers, The Monster Squad, and High Fidelity.
King’s Man The Matrix: Resurrections