Posted in: Disc Reviews by Gino Sassani on December 23rd, 2021 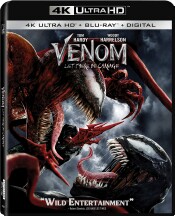 Sony released two films from their corner of the Marvel universe in 2021. On October 1st we got Venom: Let There Be Carnage. October was a good spot for the film that taps into the horror film vein as much as it does the comic book superhero world. The first film did pretty well, and Sony really wants to expand their little corner of Marvel. The film did quite well in this post-COVID reality and pulled in $500 million in 11 weeks. That was impressive, to be sure. Spider-Man No Way Home was the other Sony/Marvel film. It had the unfortunate timing of releasing just as the Omicron variant of the virus hit, and as some states are going back to various restrictions there was some question if audiences would venture out into the cinemas in enough numbers to give the film any kind of return at all. After all, we’ve seen big-budget films fall to the wayside enough to understand this is risky business. That question has been answered. Yes, Let There Be Carnage pulled in a great haul in these uncertain times, but Spider-Man just pulled in more in three days than Carnage pulled in over 11 weeks. People are coming back to the cinemas, and is it any wonder at all that Sony is trying to position themselves to cash in on that trend with more than their cooperative films featuring everyone’s Friendly Neighborhood webslinger? As far as live-action films go, the Venom series appears their best chance to do just that.

Eddie Brock (Hardy) has hit some hard times since the events of the first film. He hasn’t been able to climb back into the top of the journalism field, and he’s had an uneasy alliance with the alien symbiote he carries with him. They’ve fallen into a kind of routine and are starting to get a little sick of each other. Along comes Brock’s first chance to make a name for himself. Serial killer Cletus Kasady (Harrelson) is about to be executed for his crimes. He wants to give one last interview, and the only reporter he’ll talk to is Brock. The two have a rather odd encounter at the prison as Cletus spins a tale of enigmatic claptrap. Little did Eddie suspect but that his entire  life can be found in the various verses and drawings Cletus made while in prison. This should be a short story, but as Cletus is about to be executed, something in his blood has risen to the surface, and the even nastier symbiote Cranage reveals himself as they escape in a bloody trail of mayhem.

Meanwhile Venom leaves Eddie hoping to find a better host, but of course he can’t survive in anyone else. As we discovered in the first film, there’s something about Eddie that allows his body to survive the joining. Together they decide to try to be the good guys and end up battling Carnage to stop his reign of terror.

The film certainly has its high points. Tom Hardy continues to add to an impressive run of performances  and the duality is so much more fun than it ever was. Of course, the film is directed by a man who knows a little bit about characters with this kind of dual nature. That would be Andy Serkis  the man who practically invented motion capture performances as Gollum and later a pair of famous apes. The addition of Woody Harrelson is another casting stroke of genius. Who could have guessed when we first really got to know Woody Harrelson that the country bumkin bartender of Cheers could deliver the kind of twisted and incredibly nuanced characters that would follow the friendly sitcom? Woody Harrelson might not be the best actor alive today  but he is certainly one of the most enjoyable to watch. I wonder if Sam Malone saw that dark side so many decades ago. Naomie Harris had a couple of big films this year. No Time To Die and this one. She’s much more entertaining here as Shriek, a villain with a Black Canary kind of sonic scream. She’s madly in love with Cletus, and the two embark on a chaos spree that surpasses Harrelson’s psychotic run in Natural Born Killers. She’s great, and the two have great chemistry.

There’s plenty of action, comedy, and a little bit of gore to make it a nice ride. There’s even a nice tribute to Stan Lee within the film, and it’s nice that these folks are still trying to find ways to honor the guy.

Venom Let There Be Carnage is presented in its original aspect ratio of 1.85:1. The ultra-high-definition image presentation is arrived at with an HEVC codec at an average of 60 mbps. This is an upconverted 4K from a 2K intermediate and likely 2K original source. Still there’s a lot of room for the film to grow over the Blu-ray. The real stunner here is the wonderful black levels. You’re talking about a jet-black character that does some of his best work in the dark. Without solid shadow definition you might as well turn off the screen and just listen to the audio. No problem and check. You also need some impressive colors from time to time, because you’ve got this ultra-red character from the other corner of the ring. He’s got to look good from the start, or he’s nothing more than a blur. Check and check.

The Atmos track defaults to a really aggressive 7.1 mix. This is a busy audio presentation. There’s all that … well … carnage, and you have often overlapping dialog between host and symbiote. Thankfully you get a nice wide field in the surrounds that offers nice separation so everything has its own space. The surrounds are completely immersive and offer a nice clear sound all the way through. Dialog cuts through. The action cuts through. The score cuts through, and there’s still room for ear candy. The subs will rock the room, but more than that they add a nice depth to the Venom voice that gives it substance.

Let There Be Action: (7:20) Andy Serkis gives us a nice look behind the scenes for those big action beats.

Deleted Scenes: (9:33) There are six with a handy play-all option. As is the norm for these kinds of films, f/x are often unfinished in these scenes.

Eddie And Venom – The Odd Couple: (16:18) This is a nice look at the characters and their aforementioned duality. Again Serkis is a wonderful tour guide, giving us a little special voice cameo (and you know who I mean).

Tangled Web – Easter Eggs: (4:31) A guide to some of the hidden stuff like that Stan Lee cameo I mentioned.

Sick & Twisted – Cletus Kasady: (5:36) A look at the characters of Kasady and Carnage from comics and from the film.

A Fine Romance – Cletus and Shriek: (5:02) A behind-the-scenes look at the twisted but entertaining relationship.

Concept To Carnage: (4:23) A look at the development of the character’s look.

Select Scene Pre-Vis: (5:37)  Three-scene-specific look at the layers of f/x.

Where the film falls apart for me is the attempt to portray these brutal and gory characters all the while evading an R rating. It’s the kind of trouble Disney is going to have after taking back the Deadpool character from their purchase of 20th Century Fox. Both are the kind of character you have to be willing to go all the way with. Otherwise you have a property that never quite satisfies. Sony doesn’t exactly know what to do with what they have here. Evidence points to another flirtation with the MCU in the future, but I’m not sure that’s the trajectory that’s going to pull it all together. Forget the thin plot and enjoy these delicious performances and state of the art f/x. “Yummy.”

Gino Sassani is a member of the Southeastern Film Critic's Association (SEFCA). He is a film and television critic based in Tampa, Florida. He's also the Senior Editor here at Upcomingdiscs. Gino started reviewing films in the early 1990's as a segment of his local television show Focus. He's an award-winning recording artist for Omega Records. Gino is currently working on his 8th album Merchants & Mercenaries. Gino took over Upcomingdiscs Dec 1, 2008. He works out of a home theater he calls The Reel World. Favorite films: The Godfather, The Godfather Part II, The Body Snatcher (Val Lewton film with Karloff and Lugosi, not the pod people film), Unforgiven, Gladiator, The Lion King, Jaws, Son Of Frankenstein, The Good, The Bad And The Ugly, and Monsters, Inc.
No Time to Die (2021) – Collector’s Edition (UHD Blu-ray) (4K) King’s Man