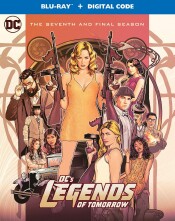 “It all started when a man named Bishop created a team of robots. He sent them back in time with one goal: to destroy the 20th century. These machines were programmed to think that they were beyond human. That they were superheroes. They made their way across country murdering some of the greatest figures in history, famous lawmen and men of science. Finally they kidnapped the inventor of time travel itself, and with his help set their sights on destroying all of history. No one could stop these so-called Legends. Not until we came upon the real flesh-and-blood superheroes whose job it is to put history back on track. We’re the real Legends of Tomorrow.”

If none of that made any sense to you, don’t worry about a thing. It’ll all become clear over the final 13 episodes of DC’s Legends Of Tomorrow: The Complete 7th and Final Season. OK, I lied. No. It really is the 7th and final season, but it won’t really become all clear. You see, that’s the nature of the series. It’s the crazy uncle of the Arrowverse that says a lot of things no one understands. But we all kind of nod our heads and suspect it will all be OK.

This was the first season in a few years that didn’t feature a problem for the Legends that they didn’t cause themselves as the previous season concluded. With each victory with these guys, they usually caused something else to fall apart somewhere … or some-when else. This year it’s the cause of last year’s bad guy Bishop (Barsoumian) who blows up the Legends’ Waverunner just as they’re about to leave last year’s cleanup of an alien invasion. That means now they are stuck in 1925 and drawing too much attention to themselves thanks to the events of that alien invasion thing. Now they’ve got J. Edgar Hoover (Baessato) on their trail thanks in part to Nate (Zano) pretending to be the famous lawman to lower the suspicion of the town’s Chief of Police and keep the pressure off Spooner (Chavez) and her mom. They decide to make their way to New York City to meet up with the guy who actually invented time back in 1925. Along the way they manage to muck up the timestream pretty badly, doing things like killing Hoover and Thomas Edison and a few other vital moments along the way. But Bishop and his evil Gideon keep replacing Hoover and others with robots to try to stop them.

For most of the season we deal with the Legends and their attempt to stop mucking up time. If I hear the words “tiny footsteps” just one more time, I shan’t be responsible for my actions. Watch the season and you’ll get it. One of the things that helps them get along is that John Constantine left Astra (Swann) with a magic key that when placed in any door takes them to a reproduction of his mansion out of the timestream. It’s a great place to rest and drink up the never-ending supply of booze.

When the team finally catches up with their time machine inventor, his name is Dr. Davies, and he’s played by a familiar actor, Matt Ryan, doing a rather splendid job of changing his appearance with dyed dark hair, a beard, and glasses and adding some really good acting nuances to create this new character. It’s a running gag throughout the rest of the season that he looks like someone, but they can’t place who. Most of the guesses are just about everyone else who has been part of the team.

Speaking of everyone else who has been a part of the team this final season does contain the 100th episode, and you’ll see a flood of wonderful cameos from your favorite cast members. There are some wonderful touches here, but it’s unfortunate that it’s obvious that the cast and crew did not know this was the end. It was an already shortened season of 13 episodes. When the season’s problem is finally solved, it leads to another cliffhanger of sorts, and it’s clear that the show was expected to continue at that point. I’m afraid you won’t get that series finale resolution you might have been looking for.

One of the more pleasant surprises this season comes in the form of actress Amy Louise Pemberton. You have known her for the last seven years as the voice of the ship’s AI, Gideon. This season through some of Astra’s magic in attempting to repair the ship, she brought the essence of Gideon alive as a human, and Pemberton is a wonderful addition to these last episodes. Honestly, I wish they had done this sooner. I was getting rather tired of the doting romance stuff between Sarah (Lotz) and Ava (Macallan). I cannot tell you how much they overdo this thing, and it’s become a bit of an annoyance, because it’s not like their evolving as a couple; it’s just that it has to be front and center at some point every 10 minutes of show. We get it already. They love each other. Can we move on to something else, please? Well, the answer to that is an obvious no, because this is all she wrote, folks.

Each episode is presented in its original broadcast aspect ratio of 1.78:1. The 1080p image is arrived at with an AVC MPEG-4 codec. This high-definition image presentation is improved because there are 13 episodes spread over four discs instead of two. No more than four episodes per disc. That means an end of compression artifact. Otherwise, you get better-than-broadcast images with bright colors and better-than-average detail and black levels.

SOCC@Home Cast Panal: (4:34) This is nothing but a very brief look at the virtual panel they did last year for the virtual ComicCon.

This was always the odd, quirky show. Because of that it has always been hit-or-miss with me. The humor often strayed to inside joke stuff that really fell flat with me. When the show was on, it was really on with often a good group of characters who never took themselves seriously. But it was never constant and very dependent on who was writing the gags. Shows usually don’t go seven years like that. They were pretty lucky to get that much time. How do I know that? “I know stuff.”

Gino Sassani is a member of the Southeastern Film Critic's Association (SEFCA). He is a film and television critic based in Tampa, Florida. He's also the Senior Editor here at Upcomingdiscs. Gino started reviewing films in the early 1990's as a segment of his local television show Focus. He's an award-winning recording artist for Omega Records. Gino is currently working on his 8th album Merchants & Mercenaries. Gino took over Upcomingdiscs Dec 1, 2008. He works out of a home theater he calls The Reel World. Favorite films: The Godfather, The Godfather Part II, The Body Snatcher (Val Lewton film with Karloff and Lugosi, not the pod people film), Unforgiven, Gladiator, The Lion King, Jaws, Son Of Frankenstein, The Good, The Bad And The Ugly, and Monsters, Inc.
Wolf Hound (Blu-ray) The Lost City (UHD Blu-ray) (4K)