Posted in Game Reviews by Michael Durr on December 16th, 2012 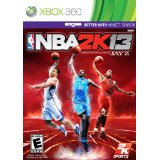 Another year for the franchise NBA video game of the console, portable and pc world has come. NBA 2k13 is automatically the best NBA game you will play this season before you even flip on the game menu because no other outfit can get their act together long enough to produce a viable game. With that aside, I suppose NBA 2k13 could have rested on their laurels but instead we get a game that is introducing a lot of new concepts. Let us go forth and play this hardwood smash of putting the ball into the ole peach basket. END_OF_DOCUMENT_TOKEN_TO_BE_REPLACED

Posted in Game Reviews by Michael Durr on November 6th, 2011

Despite some of the highest television ratings in recent history for the sport of basketball, the NBA announced a lockout on July 1st of this year. Even more disturbing was that just a few weeks ago on October 10th, they announced that the first two weeks of the season would be cancelled. For the time being, we are devoid of great shooting from Dirk Nowitzki or the spirited play of Derrick Rose. Heck, we can not even boo LeBron James. But 2k and Visual Concepts could have the cure, NBA 2k12 for the Xbox 360.
END_OF_DOCUMENT_TOKEN_TO_BE_REPLACED

Posted in Game Reviews by Michael Durr on April 18th, 2011

Most people my age grew up watching tennis with the likes of John McEnroe, Jimmy Connors or those who went for female competition went with Anna Kournikova and the Williams sisters. Maybe with the later, competition isn’t the right word. Needless to say, tennis can be a very entertaining sport to watch. For the most part, the video game world really hasn’t made too many tennis games that are entertaining to play. Hopefully that changes with 2k’s latest game: Top Spin 4. END_OF_DOCUMENT_TOKEN_TO_BE_REPLACED

Posted in Game Reviews by Michael Durr on April 14th, 2011

Baseball has always been a passion for me. I played the game as a first baseman until my sophomore year in high school and have watched the sport as long as I was able to see it. I still have fond memories of my dad taking me to tons of games where the Charlotte O’s would play (an AA farm team for the Orioles). My favorite team? The Phillies (since the early 80’s). So naturally, I was pretty excited to see Roy Halladay grace the cover of MLB 2k11 for the Xbox 360. Here is hoping to another great year. END_OF_DOCUMENT_TOKEN_TO_BE_REPLACED

Posted in Game Reviews by Michael Durr on October 18th, 2010

Back in the 1980’s and 90’s, there was no player that I despised more than Michael Jordan. I openly wished for the Bulls to lose every year in the playoffs but I usually never got my wish. Perhaps it was part envy, perhaps it was part of my underdog mentality. No matter what, Jordan always seemed to succeed. It is with much regret, that I do agree with the sentiment that he is the greatest of all time. Perhaps now, I can actually play a NBA game that has him as their cornerstone for the 2k11 edition. END_OF_DOCUMENT_TOKEN_TO_BE_REPLACED

Posted in Game Reviews by Michael Durr on January 2nd, 2008

This coming weekend will be the start of the NFL Playoffs and the end of college football. Most people are drawn to play a football game of some sort at this time. Whether it would be an old classic or the newest Madden title, we feel the need to be close to the action. Some of us just really don’t care that the Patriots might end up 19-0 and win the SuperBowl and would rather simulate some other scenario. That’s why I chose to bring you a football review at this time of the year rather than the beginning of football year like most other columnists. END_OF_DOCUMENT_TOKEN_TO_BE_REPLACED