Baseball has always been a passion for me. I played the game as a first baseman until my sophomore year in high school and have watched the sport as long as I was able to see it. I still have fond memories of my dad taking me to tons of games where the Charlotte O’s would play (an AA farm team for the Orioles). My favorite team? The Phillies (since the early 80’s). So naturally, I was pretty excited to see Roy Halladay grace the cover of MLB 2k11 for the Xbox 360. Here is hoping to another great year.

(*Please note, the following review will have a heavy dose of Philly fanboyism. If you object to this sort of thing, feel free to go watch reruns of Gilligan’s Island or NYPD Blue. I’m not sure why a pansy who roots for the Braves or Yankees would want to read this review anyhow*)

Realism is always at the forefront for baseball games. We want Ryan Howard’s swing, Jayson Werth’s long locks (I’ll miss him), and Brad Lidge’s partially torn rotator cuff. Okay, two out of three ain’t bad. The graphics in MLB 2k11 are some of the best yet. We get great representation out of the vast baseball player pool and a lot of distinct features that made it into the game.

We even get authentic stadiums and uniforms which is a nice touch. The home stadium of the Astros even has the silly little hill where opposing outfielders would break their ankles. It is all there, I’m telling you. In the My Player mode, I also appreciated that you could customize the heck out of your player. I can give myself a full head of hair and ripped abs or stick to the slightly balding and Mountain Dew gut that I normally sport.

The audio in this experience is 5.1 English Dolby Digital Sound. Nothing says to me baseball like the crack of the bat (not the clang either, darn college kids). That sound and all of the usual noises of a baseball park are carefully recreated here. However, as good as that is, I noticed that crowd noise was rather stilted and quiet. Even in what you would consider a clutch moment, the crowd seems to be an afterthought.

The soundtrack for MLB 2k11 is quite catchy, especially for this old hard rockhead. Pearl Jam, Joan Jett, and Five Finger Death Punch among others are included in this fairly heavy music lineup. It is actually refreshing to see a good list of rock choices versus some bubblegum pop rock tunes. There is still a fair share of small time bands but the music is actually pretty decent, so we can appreciate that.

On May 29th, 2010, Roy Halladay pitched a perfect game against the Florida Marlins. Later on in that same year, October 6th, he pitched a no hitter against the Cincinnati Reds. This time however, it was in the playoffs during the National League Division Series. This was only the second time in history that a no hitter or perfect game was thrown during the playoffs. This was a truly fantastic performance and Halladay is worthy of being the MLB 2k11 cover boy.

Let us start with batting. Batting can be controlled with either the right analog stick (total control) or a simple button press (classic). These work about the same and are fairly easy to operate. However, one advantage with total control I noticed is that you could hit with power or contact where as it seemed classic mode was just contact. But in reality, I could still hit homers with the same relative frequency in either mode as long as I got some good wood on the ball.

Pitching is a whole different matter. It also offers two different modes, classic and total control. Classic is a fairly simple operation. Pick your pitch, aim it where you want, press the button as hard as you want it to go and off it goes into the catcher’s mitt. Total control, one better enjoy the flimsy right analog stick. In a bizarre train of thought, somebody in charge of play mechanics thought it was a good idea to force the player to swirl the right analog stick around like you were playing Street Fighter in order to throw a pitch.

To give you an example, I chose to pitch as Halladay on Easy for my first game. I never threw so many wild pitches in my life. There are guides in game (don’t expect anything from the manual) but the truth is the right analog stick doesn’t response. A circle change or sinker becomes a pitch that goes over the catcher’s head. We are talking like Ricky Vaughn action for the Cleveland Indians from the film Major League. Mascots better run for their lives.

After some time with the game, I did get slightly better on basic pitches like a fastball or a normal change up, but it wasn’t worth it. Change to classic. Trust me on this one. Hitting doesn’t really matter but pitching has to be old school. Moving on to some other basic actions, fielding and base running do require careful input but can be mastered with good ole fashioned practice. I am huge on what’s known as small ball, so this was important for me to feel satisfied.

Difficulty is what you make it. You can play in Easy mode all you would like this season and still get the achievements. Most people will find the Pro mode the best avenue for a harmony between playing as if you were the Phillies or playing as if you were the Pirates. If you have problems with anything in particular, there are also a lot of sliders which will help your experience. It is something that 2k has always excelled in and welcome in making sure your stay in the game is an enjoyable one.

There are plenty of game modes for this year of MLB. There is the traditional quick game or MLB Today outing where you play a specific game from the current on-going schedule. I have also noticed a nasty bug with that. If you play one game of MLB Today, you get an achievement. Or you would hope. Hopefully this will be fixed soon. But if you want to recreate today’s game which might be between Phillies and the Braves (which they will beat them quite badly), you can do that here.

Alongside that, we have the Franchise and Post Season modes which will surely keep you busy for a while. In the more non-traditional modes, we have the Home Run Derby and an assortment of drills to improve your Hitting, Pitching Base Running and Fielding. If you work a little bit at each one, you should be able to grab the Gold in no time. There are also some management features which include Current Rosters and 2K Share which allows you to share various things with the online community.

The grand daddy of the replay will be the My Player mode. This will drop you into the creation screen to create yourself or what you would want to look like if you were a baseball superstar. The one thing I noticed here that I didn’t like is that certain positions required you to be right handed. Like 3B which I wanted to be my secondary position (and 1B my primary). I’ll have you know that I played 3B for a short time and I was left handed. So take that, I say. I finally decided to switch 3B to RF and go from there.

Anyway, from there you pick your major league team. Then the game drops you into that major league team’s double AA team. They also immediately place you into a clutch situation. Bottom of the ninth, two outs, a man on third, scoreless game. Get him home. If you do, you will get a nice little bonus in skill points. The whole mode is about rising from obscurity at the minor league level and rising to the majors and becoming a major star. It should also be noted that this will take you forever.

That plays into the achievements. If one were to look at the achievements, (50 of them for 1000 points) they would see a very heavy bias towards the My Player mode. Achievements like “What’s Your Ring Size?” (Winning the World Series on My Player – 80 Points) or The Hall (Hall of Fame in My Player mode – 75 points) will take a long time but you will be compensated heavily for that effort.

But that leads into my issue with the achievements. Winning the World Series on My Player is 80 points, but if you do it on Franchise mode? 20 points. That is an obscene discrepancy. Heck there is hardly any large point achievements in anything but My Player mode (with the exception of One Man Show which is pitching a perfect game or no hitter for 80 points). I also think that a lot of people won’t play the My Player mode or hardly touch it because it is not a casual minded feature.

Like last year, the people at Take Two Interactive are offering a million dollars for the first perfect game thrown by a lucky consumer. As of April 9th (according to PC Magazine), it appears two people have went through the necessary hoops to qualify for the bounty. Congratulations to those two folks whether Take Two decides to split the bounty or award it to one over the other. As a side note, they both did it with Roy Halladay against the Mets.

The game on a whole is a favorable but mixed bag. It was nice to see such a complex game when I haven’t played a non-arcade like baseball game in over five years. However, the complexity went way overboard. Pitching with total control is a nightmare and unless you want to pitch fastballs and changeups for the rest of your life, you will want to switch to the classic settings. Under the classic settings is where I feel I can safely recommend the game. If you need your baseball fix this season and own a 360, it might be your only choice but at least it is a good one. 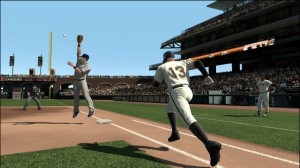 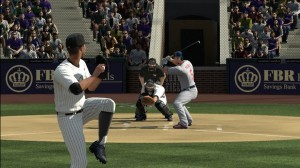 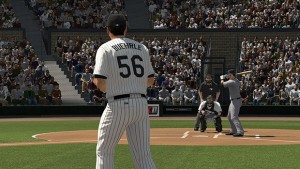 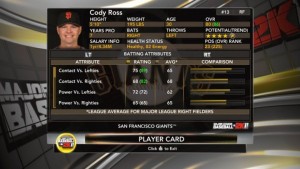 Michael Durr has been reviewing movies for the better part of fifteen years now. He primarily enjoys thrillers, sci-fi, animation and even a little courtroom drama. His favorite films include Escape from New York, the Goonies and anything with Alyssa Milano. When he’s not praising Kurt Russell as the greatest actor of our time or scratching his head over a David Lynch flick, he’s spending time at home in Texas with his lovely wife, Lori and his amazing son. How they put up with him is a mystery, but even Basil Rathbone doesn’t have the time to solve that one.
The Killing Jar Still Waiting… (Unrated) (Blu-ray)