Posted in: Game Reviews by Michael Durr on October 18th, 2010

Back in the 1980’s and 90’s, there was no player that I despised more than Michael Jordan. I openly wished for the Bulls to lose every year in the playoffs but I usually never got my wish. Perhaps it was part envy, perhaps it was part of my underdog mentality. No matter what, Jordan always seemed to succeed. It is with much regret, that I do agree with the sentiment that he is the greatest of all time. Perhaps now, I can actually play a NBA game that has him as their cornerstone for the 2k11 edition.

The video for this game is widescreen and capable of 1080p resolution. Most sports video game companies are at the point where they are only interested in providing ultra realism in their presentation. The best example of this new realism can be seen in their poster child, Michael Jordan. Michael is featured at different stages of his basketball career and from what I can tell, they are pretty accurate. Whether it is fresh out of college with hair Michael or slick bald guy Michael, it has really good detail.

The rest of the players also have an incredible attention to detail, even for some of the legends like Dennis Rodman with his trademark rainbow head. The only issue I saw was in the create-a-player which it didn’t have enough options in the face department to make a balding 5’9 white guy with a small gut. I strangely looked Hispanic with some really weird hair. Maybe I should have stuck to creating Charles Barkley instead.

The audio in this experience is 5.1 English Dolby Digital Sound. Amazing. That’s the best word I can say for the sound. If I had to pick the best feature this game brings to the table, it is certainly the audio presentation. The game envelopes you in a wave of sound from the moment your team walks onto the court. The crowd is very loud and you can actually feel the intensity.

Dribbling down the court feels authentic and so do all of the other sound effects down to the clang off the backboard as you miss a shot (which will happen, often). The only thing I could have done without was the vibration of the dribble, mostly on free-throws. It feels right, but it is one of those instances where it is too realistic which can throw your timing off.

It is the NBA Finals 1991, with the Chicago Bulls versus the Los Angeles Lakers. Michael Jordan versus Magic Johnson. Michael Jordan would perform plays here that will be remembered in every highlight reel for the next decade. Upon booting up NBA 2k11 for the first time, you are thrust into a scenario where you play as the Chicago Bulls (with control of MJ) against the fearsome Lakers. Recreating history is your main goal where you must perform ten different feats to polish famous MJ opponents of yesteryear.

However, despite the game’s obvious intentions to steer towards the Jordan challenge, there is a whole entire basketball game with authentic teams and players. Furthermore, the roster is accurate (and is seemingly updated every time you log in) right down to the player stats and how they perform. But whether you want to enjoy a quick game or a season, you are probably most interested in how a NBA player does move in this 2k sports simulation.

Please be warned that this version of NBA 2k11 attempts to be the most realistic simulation of basketball possible. There are simple controls such as passing with the A button or Shooting with the X button. Once you get past that and want to move on to more complicated movements, there is a whole avenue of presses that are performed with the analog sticks. These can take a while to perform correctly but the advantages can be limitless if mastered.

Let us take a few examples. We will start with one of my favorites, the Fade Away jumper. This one can be performed by moving the left analog stick away from the basket and the right stick while standing. Or perhaps you are the jump shot type and want to slam it home. Hold down your Right Trigger while you are dribbling towards the basket and use your right stick. Depending on how you angle it, you can do everything from a signature dunk to a fancy reverse.

This holds the same while in the post or in one on one matchups where you must use creative fakes and switches to get one up on the opposition. The problem here is the analog sticks are some of the touchiest instruments known to man. You can get away with using the buttons a good deal of the time, but for the harder movements that will win a game against the harder teams you have to master the sticks. Perhaps it is my fat fingers, but I find myself still making moves accidentally and without precision.

The difficulty in this game can be variable leaning towards difficult. There are areas such as the Jordan Challenge and the My Player mode which will require nerves of steel. In Season mode or Quick game, the challenge isn’t too bad but even that can take some getting used too. But goodness gracious, can the My Player be an extremely frustrating experience. Here is the simple reason, they start you off way too weak.

Most NBA players have stats in the 75-85 range. They are after all NBA players. The mode starts you off as a youngster looking to get drafted in the NBA with the skills of almost nothing. The game works it out to be about 41 skill range which amounts to a glorified 35 year old who is slightly balding with fat fingers trying to play in the NBA. This gives you the worst chance to succeed and a trip to the NBA D-League is almost a given. If the game was a little more forgiving and relied less on analog sticks, it wouldn’t make a lot of players feel completely inept at it.

As one can imagine, there are a lot of modes in this newest version of NBA 2k. Among the more interesting features, there is the Jordan Challenge which will take you inside 10 different scenarios of the great one’s amazing career. Association is where you can take a team (even a classic team from the Jordan scenarios) and try to get them to the NBA Finals. There is also a separate Season and Playoffs mode if you wish to shorten your adventure to the NBA.

As mentioned previously, there is the My Player/Career mode where you take an entry level player and see if you can become a star on the court. There are also a variety of multiplayer modes to take your game to the next level. There are options of online leagues, scrimmages, and even just a simple game to experience with a friend or random online person (who will probably crush you like the tiny insignificant peon you are).

For those of you who love the achievements, there are 50 of them for a total of 1000 points. Again, I must warn you here, the majority of the achievements are no walk in the park. As an example from one of my favorite sites, Mygamercard.net, based on a pool of 8,000+ people, the average score on the game to this point is 100 achievement points. That’s ten percent. Anyway, there are typical game achievements such as “Smothering” (holding your opposition to under 40% FG Percentage) and “Artillery” (make fifteen 3-pointers) which are usually doable with some practice.

However, then there are achievements that can only be described as extremely hard. “Live the Dream” which forces you to complete all of the Jordan Challenges is difficult to complete and will only get you 25 gamerscore. The two largest achievements are “Ticker Tape” which require you to win the NBA Championship in Association mode (30 gamerscore) and “The Whole Enchilada” (50 gamerscore) which requires you to get every other achievement in the game. Translation=lazy. They should have added the 50 points to the Jordan challenge, it’s that tough.

This is one of those games where the game would be awesome if it could fix one or two things. It has rich video and amazing audio and a gameplay that at the base level is very accurate to the NBA. The Jordan Challenge while difficult is a fun inclusion and it is an absolute kick to play against players of a time long ago and then be able to interject them into today’s game. But the finicky analog sticks along with an absolutely broken My Player mode make the game hard to play at times.

The game is already difficult and when things simply don’t work, it makes for a very frustrating afternoon with the ole peach baskets. I must also bring up manuals. This game ships with an 8 page manual which basically shows us the controls and calls it a day. The game points to an online “extended” manual at an incorrect url. After much work, I found the manual at the following link: http://www.2ksports.com/manual/nba2k11/. The “extended” manual is only twenty pages long, still devoid of any real information beyond the controls and some explanation of game modes.

So, what is a gamer to do? Here is my call, I do recommend the game but at a very stern warning. If you have trouble with games that are very difficult and tend to throw objects because of said difficulty, you might want to avoid this title. To the rest, do the following to ease the pain. First, use your sliders. Also, make sure that you change your shots (both free throw and field goals) to reflect the player’s percentage. While this won’t work in the My Player mode (one of the reasons why it is broken), you can at least get rid of some of the agony experienced in other areas of the game. Good luck, you will need it. 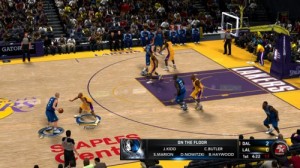 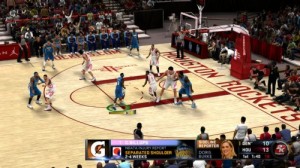 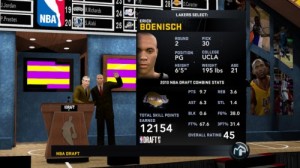 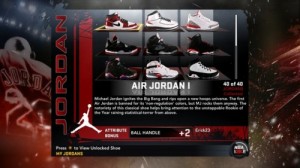 Michael Durr has been reviewing movies for the better part of fifteen years now. He primarily enjoys thrillers, sci-fi, animation and even a little courtroom drama. His favorite films include Escape from New York, the Goonies and anything with Alyssa Milano. When he’s not praising Kurt Russell as the greatest actor of our time or scratching his head over a David Lynch flick, he’s spending time at home in Texas with his lovely wife, Lori and his amazing son. How they put up with him is a mystery, but even Basil Rathbone doesn’t have the time to solve that one.
“31 Nights Of Terror” 30 Days of Night: Dark Days (Blu-ray) “31 Nights Of Terror” High Tension (Blu-ray)