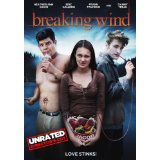 For me the last decent spoof film Scary Movie 4 (2006), and having David Zucker (Airplane and the Naked Gun series) at the helm helped make the movie what it was.  Hollywood doesn’t exactly have the best track record for putting out good spoof films, so when I saw the trailer for it Breaking Wind was immediately forgotten to never be thought of again.  Or so I thought.

Before going any further I should be clear in saying I have never watched a Twilight film, nor do I ever plan to watch them.  Any questions I may have had about the books or films I simply asked my girlfriend to explain, which was usually followed by her enduring my ranting about how much I loathe the existence of the franchise.  This review would prove to be a challenge to not let my bias get in the way. Thankfully the movie was awful on its own merit.

Though the film bears the title Breaking Wind, it should be made clear the film is more so a spoof of the Eclipse film and not Breaking Dawn.  The film starts off promising enough as an unfortunate guy is attacked alongside a pier during a downpour.  As the victim lies bleeding with a bite mark on his ass, it is only after he farts that we are ushered through the title sequence.

Sitting together on a hillside, Bella (Heather Ann Davis) recites poetry to Edward (Eric Callero) till they are interrupted by Bella’s grandmother, who proceeds to give oral to Edward as he clutches her dentures.  This isn’t just lowbrow humor here; it’s just over-the-top raunchy that simply is not funny.  That is how the rest of the film plays out, with pointless poop or sex jokes that are thrown in for no reason.  Thankfully there are moments that are not entirely awful.  The choice in having Jacob (Frank Pacheco) overweight and shirtless most of the time did help.  The shots of Jacob and his overweight clan worked nicely, but this still wasn’t enough to make up for everything else that is wrong with this picture.

The only chuckle-worthy scene comes out of a story about how Jacobs’s clan was nearly wiped out by the ‘Cold Ones’.  As the story plays out the clan is attacked by various characters Johnny Depp has played recently like the Mad Hatter, Willy Wonka, Jack Sparrow, and somehow Edward Scissorhands got in there.  I wish they kept these characters as the villains of the film, because this really felt like the only spark of creativity in the film, and there is a lot of material they simply missed out on.

The fault with the writing falls onto the writer and director Craig Moss.  If you look at the writing credits for most of the successful comedies made, you’ll see usually 3 to 5 writers were involved along with having a cast of solid comedians in the cast.  I mention this only because this film had the potential to follow in the footsteps of Spaceballs and Scary Movie.  Instead we get 82 minutes of lazy filmmaking.

I can in no way recommend this film.  I’m not a fan of the series by any means, but it deserves a spoof better than this, and hopefully one day it will get it.

Brent Lorentson is a horror writer and film critic based out of Tampa, Florida. With a BA in Digital Film, he co-wrote and co-directed Scavenger Hunt. His short stories have appeared in various horror anthologies. In 2019 his short script Fertile Blood will be a part of the anthology horror film Slumber Party. He is currently working on his first novel A Dark and Secret Place set to be released in late 2019. Favorite Films: Taxi Driver, Fight Club, I Saw the Devil, The Wild Bunch, Dawn of the Dead, A Clockwork Orange, Pulp Fiction, Heathers, The Monster Squad, and High Fidelity.
Titanic: The Complete Story B52’s: With The Wild Crowd! Live In Athens, GA (Blu-ray)