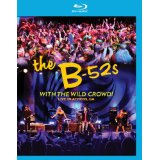 The strangely compelling pop-rockers first played publicly in February 1977. Almost exactly 34 years later, the B-52s soared again into their hometown, delivering an exuberant, hit-filled set at the Classic Center in Athens, Ga. Fortunately for concert-party aficionados, the show was captured in high-def, widescreen glory for the Blu-ray winner, The B-52s With the Wild Crowd! Live in Athens, GA. If you’re already a fan of “the world’s greatest party band” (it says so right on the dust jacket), this 96-minute celebration is an obvious must-have. The old new-wavers haven’t lost a step as they crossed one at a time into AARP territory. But even first-time flyers will feel the power generated by the B-52s time-tested crew. This high-energy set kicks off with a driving kickoff of “Pump” and the ever-catchy hook of “Private Idaho.” The pace doesn’t seriously slacken for another 90 minutes of bouncy dance-rock, lively melodies and irresistible harmonies.

Once known as much for their towering beehive hairdos and slinky, spacy outfits as for their singing, Pierson and Wilson have matured delightfully. Their voices are as strong and nuanced as ever, and their stage presence is even more seductive. Their contemporary ‘dos and ripe figures make them more goddess-like than any number of teen queens. Well, at least that’s one geezer’s opinion. Equally voluptuous is bassist Tracy Wormworth, who adds glamour as well as punch. She joins a butt-kicking backup band that also includes drummer Sterling Campbell and keyboardist Paul Gordon. Veteran touring and recording pros who have worked with the B-52s for some time, they emerge as more than mere side-persons.

The 20-tune set includes all the hits you’d want. Festive stage lighting and a packed house full of outlandish outfits are fun to watch, but the real appeal is the music. The group’s lyrics – they write more or less collectively – range from wry satire to dance-party dynamite, with an emphasis on good time, fun time and even better times. Songs like “Deadbeat Club” and “Party Out of Bounds” turn downers into delights. Much of their lyrical material has it roots right there in Athens, and the audience approved with enthusiasm.

The video is 1080i HD 16×9, and the widescreen transfer is impeccable. This production was clearly designed to give the concert extended life on video.

There are three audio choices. The Dolby Digital 5.1 has the best surround effects, the DTS HD Master Audio has a more subdued clarity, and my favorite this time is the LPCM Stereo, which delivers serious punch, especially on the bass lines.

The only extra feature is a 33-minute sit-down with the four original members. As they take turns sharing memories, we are treated to slide shows and brief clips that delve into the band’s three decades-plus of history. There’s a sad side as they remember their deceased member Ricky Wilson and his contributions to their success. But it’s mostly brighter background. It may actually be a scrapbook that the casual fan finds a bit too detailed.

You can have fun watching this show by yourself, but it’s more clearly aimed at folks who want to gather and maybe jump around a bit while they watch. It would also make a terrific soundtrack for an aerobic exercise class.