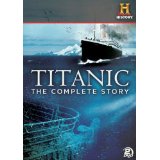 Most of the people when they hear the name Titanic think of the ship that sank almost one hundred years ago to this day. Well, except for James Cameron who thinks of the oodles and oodles of dollar bills that he bathes in on a daily basis. Regardless, the people at A&E and the History Channel decided to bring us three documentaries and five hours of knowledge on perhaps the most famous ship of them all. The RMS Titantic.

Titanic: The Complete Story comes on two discs and has over five hours of interviews, narration, recreation and tons of old footage. There are really two documentaries here disguised as three (one has two parts) but each of them has their own theme.

Death of a Dream (1:35:47) starts at the very beginning, before the gigantic ship was even a gleam in a bunch of shipbuilders’ eyes. White Star Line led by Bruce Ismay and under the bankroll of the legendary JP Morgan set out to create three Olympic sized ship liners. They were named the RMS Olympic, Gigantic (later renamed to the Britannic) and of course the Titanic. They were facing challenges from companies like Cunard and Hamburg America and much like the space program of the 60’s, companies like White Star rushed to make the best and the biggest as quick as they could.

The two ships (Olympic and Titanic) immediately met a large amount of controversy. People were not concerned about the size but also the safety of such a ship. However, after they were built, opinions changed almost immediately calling it a crowning technological achievement. They had complete trust in both ships and called them unsinkable. In addition to being large, they had a number of high class perks for passengers on-board. These included an exercise room, Turkish bath, and even a complete band to entertain the guests. Captained by Edward John Smith, the Titanic parted from Southampton (UK) on April 10th, 1912 to meet its eventual doom.

The Legend Lives On (1:35:52) is the second part to this documentary and picks up after April 14th, 1912 when Titanic hit an iceberg just south of Newfoundland. At first, people still did not believe that the ship was going to sink since only weeks before, it was deemed unsinkable. Eventually lifeboats were lowered and filled with survivors (women and children first protocol was followed) and the lasting image was the ship finally sinking. However, there were clearly not enough life vessels to go around (only 1/3rd or 1,178 people of the full crew) and many people plunged to their deaths.

The RMS Titanic had a serious smugness to it and the ship’s crew did not heed various ice field warnings in those days to its eventual sinking. Even when the radio reports first started to come in, the general conception was that the liner was going to make it. It probably did not help that since there was no FCC regulations on radio speech at that time, there were many conflicting reports. But eventually the infamous tragedy was accepted and soon people were more than willing to start casting out accusatory fingers and not just at the giant iceberg.

Titanic’s Achilles Heel (1:29:53) is a documentary from 2007 and kinda picks up from the first two documentaries. The documentary gives a quick recap of the Titanic’s eventual demise and springs into the first question for the viewing audience, “Did the ship have a fatal design flaw?” The Titanic story has always a tale of two sides, the romantic Hollywood version and the grim reality. Coverups and controversy surrounded the ill-fated ship. But luckily there were people who were willing to dig a little deeper.

In a 2005 journey, John Chatterton and Richie Kohler took a trip to where the wreckage lay. They wanted answers and also took along architect Roger Long who could look at the final remains and determine in an un-biased fashion what exactly happened on that day in April, almost a hundred years ago. There were multiple theories fashioned but it seemed to center around the fact that the RMS Titanic was not built properly. It was weak but yet they could still not find the smoking gun. But then the smoking gun came in the form of an expansion joint and a return trip in 2006 aboard the Keldysh gave them even more evidence to support their claims.

Personally, I was a little bit glad that this documentary came around on what will be the 100th anniversary of the ship’s sinking. I can not stand the Hollywood movie and believe it or not consider it to be the worst movie of all time. These five hours of footage open up a lot of doors that I had previously closed on a piece of history. The first documentary and its two parts represent the greatest piece of viewing entertainment. There is a lot of history here and we get to listen to survivors like Millvena Dean, Edith Brown Haisman and Ruth Beecher Blanchard talk about what it was like aboard the ill-fated ship.

The second documentary is a little more sensational, a victim of the recent trend towards more on-location documentaries. They do a great bit to explore the wreckage as it stands today and draw some very interesting theories but ultimately do not do so well in the particulars. The realization is that it is now 100 years and while the sea can sometimes preserve time, it can not preserve it forever. Even with the adoption of CGI techniques and superior intelligence, we might only learn so much about that sad day.

The video is in 1.33:1 Fullscreen presentation. The first two documentaries are of the basic television quality mixing interview footage with historical photography and a little bit of recreation mixed in. Since the last documentary is more recent, it has a little more in the production value department. Here there is more CGI (used in recreating the events of the Titanic) and actual live footage from the most recent expeditions into the wreckage. Passable quality throughout.

For the audio portion, we get a 2.0 Dolby Stereo track in English. All of the documentaries are similar in audio quality. They are about 90 percent dialog with the occasional dramatic sound effect. Dialog is clear thanks to the narration skills of David McCallum. Sound effects are a mixed bag but they are enough to carry the mood of the documentaries. It is serviceable and as long as one does not fall asleep, they should be able to understand every word. No subtitles could be found.

Perhaps I find it interesting or sad that Titanic in 3D will be coming to theaters on April 6th, 2012 just four days shy of the maiden voyage of the ill fated ship. Perhaps a better use of time would be to spend a few hours with this documentary set from the people at A&E and the History Channel. It is chock full of information and explores some new theories about what really went on during the one and only voyage of the RMS Titanic. There is a ton here to absorb and one might even come out of it fully entertained depending on their disposition towards historical documentaries.

The disc package is not all that special unfortunately. The video and audio are bearable and the only extra I could find was a crude timeline that took maybe a couple of minutes to look through. Despite that, I will recommend this documentary to those ship-faring and historical types who do not mind sitting through this very long exercise. Hey, at the very least it does not involve Leonard DiCaprio and Kate Winslet making goo-goo eyes at each other.

Michael Durr has been reviewing movies for the better part of fifteen years now. He primarily enjoys thrillers, sci-fi, animation and even a little courtroom drama. His favorite films include Escape from New York, the Goonies and anything with Alyssa Milano. When he’s not praising Kurt Russell as the greatest actor of our time or scratching his head over a David Lynch flick, he’s spending time at home in Texas with his lovely wife, Lori and his amazing son. How they put up with him is a mystery, but even Basil Rathbone doesn’t have the time to solve that one.
The Descendants (Blu-ray) Breaking Wind