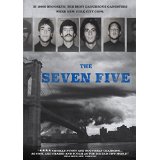 “Did you consider yourself to be a New York City cop or a drug trafficker?”

For the handful of police officers profiled in The Seven Five — a lively and incendiary documentary about a spectacularly corrupt Brooklyn precinct — the distinction between cop and crook was virtually nonexistent. (At best, it was negligible.) Their stories are told here in a breakneck pace that eventually becomes draining. But it’s only because director Tiller Russell was able to gain amazing access to the colorful characters who were actually there.

“Michael Dowd is a crook who ended up wearing a cop’s uniform.”

The Seven Five breathlessly bestows the title of “dirtiest cop ever” on Dowd and proceeds to make a pretty solid case to back that claim. (At least in the real-life, Non-Vic Mackey Division.) The film opens with Sept. 1993 footage of Dowd testifying in New York City’s first public hearings on police corruption in more than 20 years. The action jumps back about a decade, when the crack cocaine boom of the 1980s resulted in a river of dirty money flowing through NYC’s streets. Russell repeatedly revisits the 1993 testimony, where we see a casually unapologetic Dowd run through his personal laundry list of offenses. (Theft, extortion, drug trafficking and drug use.)

“His word against mine…and I’m a cop.”

Whenever the action jumps back to the ‘80s, we are treated to first-hand recollections from Dowd (looking and sounding like an even more manic Joe Pesci) and some of his colleagues from Brooklyn’s 75th precinct. That includes cool, collected counterpoint Ken Eurell and a fellow cop who simply goes by the name “Chicky” for the purposes of this film. But the guy who almost steals the show — if it were possible to steal the show from Dowd — is Adam Diaz, a Dominican drug lord who is almost as flamboyantly shameless in talking about his brutal crimes as Dowd is. The duo regards their mutually beneficial alliance the same way you or I might recall a particularly wacky co-worker.

Russell’s most effective trick — besides getting these people to speak on camera in the first place — is the rat-a-tat editing of those anecdotes. The director cuts between multiple interview subjects who are recounting the same anecdote. The result is the feeling you’d get if you were hanging out with a group of animated friends relaying an insane story from back in the day.

Then again, those same hyper friends can be exhausting after a while, and the same is true of The Seven Five. The documentary clocks in at a reasonable 104 minutes, but there are only so many stories about ripping off drug dealers and other lowlives you can listen to back-to-back before it starts to get a bit grating. This is where the absence of a Serpico-like crusader — or *any* sort of counterpoint from Russell — hinders the film. The closest we get is occasional testimonials from a handful of internal affairs officers and other officials who clearly don’t interest the director nearly as much as the “stars” of the film.

And who can really blame him with this colorful cast of characters? Dowd is gleefully forthcoming as he recounts ripping off his first crook at a traffic stop and treating himself to a lobster dinner. Eurell is considerably more demure about his motivations, wanting the money for his family. The cops talk about undergoing “Integrity Training” at the police academy and liken it to goofing off at parochial school. Apparently, the most important lesson any of them learned in the academy is that a cop’s most important job is to protect and serve the public each other. Russell largely skips the part where this was a useful mantra in city that was under severe fire at the time, and runs with the notion that cops trusting each other exclusively meant they were willing to look away from shady dealings. The “we always look out for each other” code also helps explains Dowd’s surprisingly despondent reaction to the death of Robert Venable, a transit cop he barely knew that was shot to death.

I’m not even a little surprised to hear The Seven Five might become a feature film. After all, the story of the 75th precinct has been described as the cop version of Goodfellas. (Complete with a surprising final-act informant.) It makes sense, and I suspect a more structured and balanced narrative — along with an infusion of style — will take this story to the next level. As it stands, this is great story that’s been made into a pretty good documentary.