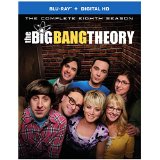 Finally a situation comedy for geeks. Ever since Urkel went from being a one-off character on Family Matters to the star of the show, the geeks have been looking for their own series. With The Big Bang Theory you get plenty of geek factor with a healthy dose of laughter. I honestly haven’t laughed this much at a situation comedy in decades. Meet Sheldon Cooper (Parsons). He’s a brilliant young scientist working at a Pasadena university. His field was string theory but now he’s shifted to dark matter. He’s one of those young prodigy guys who likely graduated from college and then went home to get his diapers changed. Sheldon insists on tight structure and is uncomfortable outside of a highly structured environment. He’s insecure and can’t stand confrontation. He also, of course, believes he’s the smartest guy on the planet. He’s a huge comic and science fiction fan who envisions himself a young Lex Luthor. His girlfriend Amy (Bialik) is a behavior scientist. The two have a relationship based on a contract and have to negotiate even when they can kiss.

His roommate Leonard (Galecki) is also a gifted member of the school’s staff. Leonard is about the most normal one of the group and actually has a steady girl in next-door neighbor Penny (Cuoco). Penny now works as a sales rep for a pharmaceutical company and finds she’s doing well. Unfortunately, they cut her hair off this year, and it isn’t a good look at all. She’s not the sharpest tool in the box, but she can often teach the boys a thing or two about the real world.

Leonard and Sheldon often hang out with the duo of Raj (Nayyar) and Howard (Helberg). Raj is from India and is usually worried about his job. If he messes up, he’ll be deported, and he’s gotten used to the meat-eating, materialistic world of America. He’s ultra-shy around women. When he’s not trying to make a move, he finds it impossible to speak out loud when one is in the room. He’s an astrophysicist. Howard is now married after years living with his stereotypical Jewish mom, who we never really see. She’s usually yelling up to him in his room. He’s an MIT graduate who thinks he’s a lot cooler than he really is. He’s now married to Bernadette (Rauch) who has a high-pitched nasal voice and tolerates his childish tendencies…barely. Howard has been to space as an astronaut. The boys surround themselves with all of the action figures and comic books that go along with the lifestyle. Since this is a Warner show, you can expect more than a fair share of material from the DC Universe. Still, the Marvel stuff does get in there, including a nod to Stan Lee.

The season starts with Sheldon returning home from his forced exile and odd train trip. That’s when he announces he’s changed his field because he has yet to make a ground-breaking discovery in string theory. He even tries teaching but ends up with Howard as is only student. It doesn’t take long for the gang to settle into the usual routine.

One of the bigger plot points of the season involves Leonard coming up with a rather brilliant theory about the nature of the universe. When he takes it to Sheldon, he runs with the idea and in a single night has done all the math and written a paper. Things get a little dodgy as Sheldon starts to get most, and in a published version all, of the credit for the idea. If you didn’t see that one coming, you haven’t been watching long enough.

Another ongoing story involves Stuart (Sussman) living with Howard’s mother until his comic store can be rebuilt. Howard thinks they have a strange and inappropriate relationship, and it serves to be a constant irritation for him. That story line ends with Stuart finally opening the comic store again, but with the death of Howard’s mother.

Howard’s mother was voiced by actress Carol Ann Susi, who died suddenly during the filming of season 8. She was really only 62 and was never seen on the series. We only heard her shrill yell. She will actually be seen for now on, but not really recognized. A very small picture of the actress has been placed on Sheldon’s fridge and will remain there until the show ends. Don’t try to see it. It’s much too small to make out on camera. It’s a rather clever way to honor the actress and allow her to finally be seen, but not really. It’s obvious that she’ll be missed on the show.

Other running storylines include Leonard and Sheldon trying to visit Skywalker Ranch on their way to give talks at a science convention. Sheldon ends up getting tasered by security. Raj and Howard deal with letting a bird into the university’s clean room. Howard is asked to throw out the first pitch at an Angels game and uses a robot with the expected disastrous results. Billy Bob Thornton shows up as a doctor who gets obsessed with Penny who happened to put her hand on him for two Mississippis. Turns out he’s the urologist to the stars including Gene Roddenberry and William Shatner, so naturally the guys take a liking to him. The boys also meet Nathan Fillion at a deli and become the expected nuisance.

Shooting Stars – BBT on BBT: (7:07) A look at the Billy Bob Thornton visit to the show.

Superfans: (12:29) There was a contest where fans could compete in Big Bang Theory trivia to win a day on the set of the show. There were six winners representing the United States, England, and Australia. This feature follows their special visit.

Consolation Prize – Chuck, Jim & Kelly Make The Hollywood Hall Of Fame: (3:52)  The three each had stars on the famous Hollywood Walk Of Fame on different days, and this is coverage of all three.

Mixing science with comedy appears to not only be funny. It also has some serious staying power. The show continues to be one of the highest rated comedy shows on television and seems to be going strong. The show takes the time and money to employ actual science consultants so you might even learn something along the way. “Of course. That’s how you know it’s a good joke. It entertains and educates.”

Gino Sassani is a member of the Southeastern Film Critic's Association (SEFCA). He is a film and television critic based in Tampa, Florida. He's also the Senior Editor here at Upcomingdiscs. Gino started reviewing films in the early 1990's as a segment of his local television show Focus. He's an award-winning recording artist for Omega Records. Gino is currently working on his 8th album Merchants & Mercenaries. Gino took over Upcomingdiscs Dec 1, 2008. He works out of a home theater he calls The Reel World. Favorite films: The Godfather, The Godfather Part II, The Body Snatcher (Val Lewton film with Karloff and Lugosi, not the pod people film), Unforgiven, Gladiator, The Lion King, Jaws, Son Of Frankenstein, The Good, The Bad And The Ugly, and Monsters, Inc.
The Seven Five The Jinx: The Life and Deaths of Robert Durst (Blu-ray)