A Kind of Murder (Blu-ray)

Posted in: Disc Reviews by Jeremy Butler on March 27th, 2017 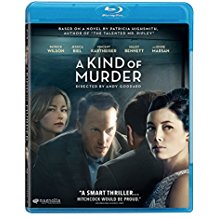 You ever hear that old adage about not putting your hands too close to the flame? Obviously Walter Stackhouse, Patrick Wilson’s character in A Kind of Murder, did not heed the warning as he finds himself embroiled in a murder conspiracy of his own while investigating a separate one. This film noir is based on a novel from the famous author of The Talented Mr. Ripley, Patricia Highsmith. Murder mysteries in recent months have become a huge interest of mine, so when presented with this film, I was extremely excited with the opportunity. However, after watching, though I was intrigued by the whodunit aspect, I found the other areas lacking, specifically connecting with the lead character.

Walter Stackhouse (Patrick Wilson) appears to be the man who has it all: a successful career as an architect, a beautiful home, and a gorgeous wife (Jessica Biel) to share it with. But a happy man is the last thing he appears to be, escaping his seemingly perfect life in order to delve into the macabre world of murder. After a gruesome murder of a woman, Walter begins to investigate her death, which eventually leads him to her widow (Eddie Marsan) and puts him at odds with investigating detective Laurence Corby (Vincent Kartheiser).

Further complicating matters is Walter’s growing obsession with friend of a friend, Ellie (Hayley Bennet) who isn’t really complaining about the attention that she is receiving from Walter. During his investigation, Walter finds himself in over his head engaged in a battle of wits with a clever killer, and when tragedy befalls him and police direct their attention to at him, he must find way to clear his name, all the while avoiding becoming the killer’s next victim.

“I did nothing wrong.”

Seems to be the overall theme of the murder mystery, usually as a justification for the lead’s character’s wrongdoings. Those are famous last words if I ever heard them. Obsessing about murder and possibly fantasizing about the death of your wife is not necessarily doing everything right, if you ask me, although, after seeing his circumstance, I can understand the impulse. Kudos to Jessica Biel for her performance as Clara. I actually felt a shiver go down my spine when she threatened to kill herself should her husband try to divorce her. Although they did not share much screen time together on this project, Biel’s and Bennett perfectly opposite portrayals (Biel representing the dark aspects, and Bennett the light) assisted in making Wilson’s circumstances more relatable, even though I was not able to connect with the character completely.

The biggest success for the film in my opinion is the perfect way that it captured the 60’s time period. I can’t guarantee its accuracy as I was born twenty years too late, but to my eye, the production staff and costume designers are owed a pat on the back. From the garbs to the setting, I truly felt transported back in time, to a simpler time when motives were simpler, and it’s a good thing given that the investigators are top-shelf.

The Blunderer indeed. I will say this for Wilson’s performance: he committed to that aspect as I like Detective Corby found myself wondering if he wasn’t the smartest dumb person that I had ever seen. How does someone who has managed to achieve so much success in life manage to get himself so tangled in a murder investigation, and then turn around and make matters worse for himself by not knowing when to quit? In the end that was my biggest obstacle to committing to the story, as I simply didn’t find it believable. A part of me wants to check the original source material to see what I missed.

A Kind of Murder is presented in the aspect ratio 1.85:1.  The 1080p image is arrived at with an AVC MPEG-4 codec at an average of 24 mbps. The fine detail is adequate during medium shots but is lacking during close-ups. I expected a crisper picture, especially during the winter scenes as the snowflakes were more synonymous with puff pieces. The color palette as well as flesh tones were muted; however, it served the mystery noir in a complimentary manner. On the positive side, the black levels display good separation, specifically in the bookstore setting.

With the exception of a few plates crashing to the ground after an angry outburst, this is a highly dialog-driven film, which the DTS-HD Master Audio 5.1 track is more than capable of handling. Overall, I found everything from the ambient noise to the soundtrack and dialog to be extremely well balanced without feeling like one overwhelmed another. That said, as much of the sound was generated from the front speakers, I did not experience an immersive feeling.

The Psychological: Andy Goddard (10:39):  A in-depth interview with the film’s director intercut with clips from the film and commentary from the cast about working with Goddard. Very remiscent of a “Making Of” featurette.

The 60’s Look (05:07): A brief featurette with interviews from the cast discussing the wardrobes and settings which helped create the feel and look of the 60’s.

The Noirish Characters of A Kind of Murder (14:35):  This was an excellent addition to the feature section. It really helped me get an understanding of the characters after the fact. To save yourself the same trouble that I had, I would suggest watching this first, but be warned that spoilers may be contained.

The story built up such intrigue and fizzled out at the endzone, if you can forgive the sports analogy. Though as I mentioned earlier, I never really connected with Wilson in the role, the whodunit aspect was more than enough to retain my interest, but that was built on my belief that there was going to be a game-changer at the ending. Without delivery of that aspect, the film just doesn’t hit home with me.

Jeremy Butler is a film school graduate of the International Academy of Design and Technology. He is been writing for Upcomingdiscs since 2012; however, movies have played a big part of his life for much longer. Favorite genres include horror, science fiction/fantasy, and comedy. Favorite movies are V for Vendetta, Boondocks Saints, Kiss Kiss Bang Bang, and The Godfather.
When Calls The Heart: The Heart Of Faith Tuesday Round Up: March 28, 2017