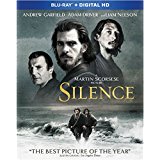 “The price for your glory is their suffering!”

For most of us, hearing the name “Martin Scorsese” leads to iconic wiseguys, rock and roll, and Robert De Niro/Leonardo DiCaprio movies dancing into our mind’s eye. Further down the list of Marty-related things — probably even below Scorsese’s real-life film preservation work — but no less crucial to appreciating the director’s filmography is the role that faith has played in his personal and professional lives. The most obvious manifestations are the three religious epics Scorsese has directed, including his latest film Silence.

Silence largely takes place in mid-17th century Japan, a time and place where Christianity was outlawed. Fathers Sebastiao Rodrigues (Andrew Garfield) and Francisco Garupe (Adam Driver) are a pair of Portuguese Jesuit priests who receive word that their mentor Father Cristovao Ferreira (Liam Neeson) has renounced his faith. The film opens with the impending torture of Father Ferreira and others in Japan, who are implored by shogunate to publicly abandon Christianity. Rodrigues and Garupe refuse to believe the rumor that Ferreira has renounced his faith and is living as a Japanese man.

To get to the truth and clear Father Ferreira’s name, the pair set out on a dangerous two-man mission to Japan. They are intermittently guided by Kichijiro (Yosuke Kubozaka), an alcoholic fisherman who has his own complicated relationship with Christianity. Once Rodrigues and Garupe arrive in Japan, they find a country whose Christian population has been violently driven underground. As a result, the two priests face great peril — and bring serious danger to those around them — to try and save a man who might not even need saving.

The movie is based on Shusaku Endo’s 1966 novel of the same name and contains an effective element of mystery early on. I mean, Rodrigues and Garupe don’t even know if Ferreira is still alive, and their dangerous odyssey into an otherworldly strange land also reminded me of Apocalypse Now. Of course, Silence is more of a direct descendant to 1988’s The Last Temptation of Christ and 1997’s Kundun, the two faith-focused dramas Scorsese previously directed. (The filmmaker has repeatedly talked about his desire to become a priest while he was in high school…before falling in love with cinema.)

“I pray, but I am lost. Am I just praying to silence?”

The story of Silence is simple and straightforward by design; the idea is for the movie’s “plot” to spur thought and discussion about complex topics like religious persecution and the nature of faith. The latter topic is the heart of this film for a variety of reasons. The more literal interpretation relates to the notion that Japanese Christians were forced to pray and worship in silence. But in a broader sense, the movie deserves praise for tackling the tricky business of faith: are the Jesuit priests behaving selfishly by letting others suffer in their stead? Is it selfish to occasionally demand a sign from God to indicate that the devotion and sacrifice of His believers is justified?

These are compelling and riveting questions. Where I personally struggle with Silence is that I’m not exactly sure how much of that is inherently a part of Endo’s novel vs. what Scorsese (who, to be fair, also co-wrote the screenplay with Jay Cocks and deserves credit for preserving the source material) brought to the table as a filmmaker. As I mentioned before, the story of Silence is elegant in its simplicity; however, the 160 minute running time means the film occasionally meanders and lingers. (You can feel the director becoming as intoxicated by his exotic surroundings as the Jesuit missionaries.) Sometimes it’s to great effect — including a brutally clinical and prolonged torture sequence involving crucifixions by the sea — but there are a couple of stetches that feel either repetitive or inessential.

More importantly, the movie’s focus often feels misguided. Both Garfield and Driver adopt questionable, distracting accents to portray Portuguese Jesuit priests — Neeson, on the other hand, showed zero inclination to ditch his signature Irish brogue — and much of the story centers around Garfield’s more placid Father Rodrigues. I understand the movie borrows from real-life events, but Garfield/Rodrigues (with some wan voiceover narration to match his lanky frame) doesn’t exactly make for a protagonist you want to stick with for almost three hours. Driver’s Father Garupe shows interesting flashes of anger and emotion, but is ultimately underutilized.

To be honest, I was infinitely more impressed with the Japanese performers in the cast, specifically Kubozaka’s cowardly and conflicted turn as Kichijiro, Issey Ogata’s flamboyant authority as governor Inoue Masashige, and Tadanubo Asano’s cruelly impish performance as The Interpreter. The latter two performers bring a force and conviction to their characters that helps illustrate why it was challenging for Christianity to take root in Japan.

Silence is presented in an aspect ratio of 2.40:1. The 1080p image is arrived at with an AVC MPEG-4 codec at an average of 29 mbps. The film’s lone Oscar nomination was for Rodrigo Prieto’s stunning cinematography, which alternates between striking overhead shots and picturesque, otherworldly panoramas. (Silence was filmed in Taiwan and Taipei.) Each of those shots — along with close-ups and medium shots — feature extraordinary fine detail that includes some pleasing filmic grain. (No surprise, considering we’re talking about a Martin Scorsese picture.) Black levels are uncommonly inky and feature fantastic separation and shadow detail during the movie’s low-lit scenes, including a brief jaunt through a cave. The overcast gray/blue palette doesn’t result in the most outwardly eye-popping image you’ll ever see, but this Paramount Blu-ray still delivers a terrific visual presentation.

The DTS-HD Master Audio 5.1 track is even more effective than the spectacular visual presentation. Ironically, we *hear* Silence before the film’s first image appears on screen. The sound we hear is an all-compassing symphony of nature noises that gradually swells to fill the entire sound field before abruptly and effectively cutting out. Those nature noises — specifically the sound of crickets — play a slyly prominent role in this sonic presentation. (The sound of crickets tends to signify, you know, “silence.”) Of course, the track also flexes its muscle during an early scene at a bustling marketplace, while the subs add an impactful oomph to crashing waves in a brutally extended torture/execution sequence. For a movie called Silence, this outstanding track has a lot to say.

Martin Scorsese’s Journey Into Silence: (24:30) The legendary director first became aware of Shusaku Endo’s novel in 1988 — the same year The Last Temptation of Christ was released — so it’s been a nearly 30-year odyssey to get this movie made. (Scorsese and co-screenwriter Jay Cocks started working on a draft in the early 1990s.)

In addition to offering a timeline of the project, this informative featurette offers historical context (including a look at real-life figures like Liam Neeson’s Father Ferreira) along with a peek at Scorsese’s filmmaking process, which included adjusting some pre-planned shots on the fly once he arrived on location and became inspired by the landscape.

Just like with the Blu-ray release for Scorsese’s previous film, Silence left me wanting more in the supplement department. (Even though the one special feature included here is actually quite strong.)

In terms of the movie itself, Silence has its flaws — particularly a pair of underwhelming leads — and it’s not likely to join the pantheon of Scorsese’s most beloved or revered works. However, the movie is also among the filmmaker’s most personal, powerful and thought-provoking works, and it definitely merits a look.