Posted in: Disc Reviews by John Delia on August 9th, 2017 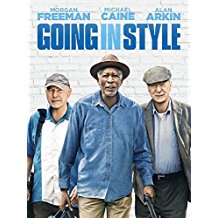 Putting a twist on the original movie Going in Style, director Zach Braff does a good job of reviving the comedy for modern-day audiences.  He turns up the laughter with memorable situation comedy and actors who can deliver some of the best one-liners.  It’s a lot of fun for a date night or just a chance to get away from the humdrum to laugh a little. Retired and trying to scrape by on his retirement check, Joe Harding (Michael Caine) is about to hit an unexpected brick wall. With his mortgage in jeopardy from lack of timely payments and his granddaughter needing help with tuition, he’s in a very tight spot.  His best friends Albert Garner (Alan Arkin) and Willie Davis (Morgan Freeman), who have been living together for the past 25 years to curb expenses, are about to be in the same boat.

The company the three men have worked for has decided to close doors in America and movie their operation to a foreign country.  This makes them not responsible for American retirement funds dumping all their former retirees and anyone being fired due to the dissolution and move to overseas operations. Now without their income, the three find themselves open to other measures.  Joe comes up with a bright idea to rob the bank where their retirement funds are located. To add icing on the cake, it’s also the place where Joe has been bamboozled into one of those adjustable loans.

So begins a plan so over-the-top that it might just work. Director Zach Braff puts his famous actors through their paces setting up the heist while dealing with personal problems. He provides a great stage to put the three men who have never worked as a trio together and lets them do their thing.  You can tell they are having a good time as their banter bubbles up some very hilarious scenes that keep the laughs coming.  He also sends a message to those companies that are taking away jobs from Americans and hurting those who have given their loyalty only to be shoved aside.

Leading the crew, Michael Caine uses his signature deadpan comedy to give his character some serious tone in the midst of this tragedy of financial loss.  Getting notices of possible eviction, his Joe Harding has his back to the wall, looking for a solution no matter how impossible.  His two best friends, played by Alan Arkin and Morgan Freeman, add the chemistry that makes the film work.

Arkin’s Albert Garner, who’s still in the dark ages when it comes to communications, feels the bank heist is wrong. But after a tryst with grocery checkout woman, Annie Santori (Ann-Margret), he realizes there’s more to life that money can buy.  As for Willie Davis, played by Morgan Freeman, he’s been given a medical life expectancy of a couple of years, so he feels there’s nothing to lose.  He keeps the fun going as he brings inspiration into the film by siding with his pals for the very challenging plan.

Going in Style has been rated PG-13 for drug content, language, and some suggestive material.  Be cautious when deciding to allow immature children see the film, as it does have some scenes that are inappropriate for youngsters.

Going In Style is presented in its original aspect ratio of 2.40:1. The 1080p image is arrived at with an AVC MPEG-4 codec at an average 30-35 mbps. This high-definition image presentation will not disappoint. Colors are pretty bright and pop. Detail is high, but there is little texture to the rather glossy finish of the image. Character close-ups offer some of the best of the detail. For some reason Freeman’s features really come alive in this presentation. There’s a lot of nuance in his eyes that plays well in a nice sharp image. Black levels are above average but don’t really play much of a role in this pretty bright film.

The DTS-HD Master Audio 5.1 is playing almost exclusively to the dialog. It’s not that busy of an audio presentation, and it really shouldn’t be. You get enough out of the subs to add some depth to the sound. Dialog comes through perfectly clear. The music is often whimsical and plays with nice clarity. The best thing that you can hope for on this kind of film is for the audio to be pretty seamless and not stand out.

There’s an Audio Commentary Track with Director Zach Braff. He appears a little reserved with a ton of dead air. What you end up with is mostly descriptions of sets and scenes.

A nice remake of one of the classics.

John Delia has been on all sides of the movie business from publicity, writing for publications and on line blogs, script writing, to film making. Writer, critic, film editor he has worked as a film critic on this second go around for 14 years. He earned his Bachelor’s degree at the college of Journalism and Communications at the University of Florida in Gainesville, Florida. John is an active member of the Southeastern Film Critics Association (SEFCA) . Favorite Films: Lord of the Rings/Hobbit trilogies, The Godfather trilogy, the Indiana Jones trilogy (I didn't like the 4th), The Avengers and for TV it's Game of Thrones. As for animation it's a tie between anything Pixar and everything Hayao Miyazaki.
Tuesday Round Up: August 8, 2017 Bender