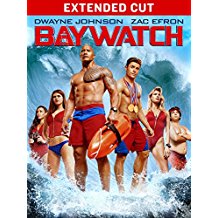 Baywatch is presented in its original aspect ratio of 2.39:1. The ultra-high-definition 2160p  image is arrived at by an HEVC codec with an average bitrate of 60 mbps. This is a 2K upgrade, as most newer films will be this early in the format’s adoption. The ultra-high-definition image presentation takes full advantage of the color boost the HDR provides. Reds are quite saturated and stand out, from the film’s titles to the red lifeguard uniforms on the girls. I was surprised that the film wasn’t excessively bright, when you consider how much of this is shot on the beach. The lighting is actually quite natural. Of courser, the cheesy f/x on that boat fire look really bad in 4K. I know it was a bit of a gag, but it’s a distraction to a pretty solid image presentation. Black levels are a little soft, but there’s still plenty of detail. The ocean looks sweet, and there’s a ton of that in this film. You get some nice texture here from everything including beach sand and costumes. Flesh tones are really accurate and give you the intended suntanned warm colors. There must have been a temptation to go overboard (pun intended) with the bright and snappy colors, but credit the transfer team for staying more realistic overall.

The Dolby Atmos presentation defaults to a 7.1 track. This is mostly a dialog film. Yes, there are plenty of action sequences, and they do liven up the surrounds a bit. The best surround work, however, is the subtle crashing of distant waves and seagulls. These kinds of things add atmosphere. Subs are pretty solid for this kind of film. A lot of it comes from the percussive score, but there’s plenty of room shaking during the action sequences.

Meet The Lifeguards: (21:36) The feature looks at each of the film’s characters and becomes pretty much a mutual admiration society. They all particularly talk about how much fun they had dropping F-bombs and basically getting to play with the film’s R rating.

Continuing The Legacy: (9:26) It’s sweet that everyone here thinks that Baywatch is the most successful show in television history and make sure to say that every thirty seconds. There are clips from the original as cast and crew talk about how much they loved the original show.

Stunts And Training: (9:09) You’d think this would be more about the pre-film program, but it’s just an excuse to see The Rock and Efron doing pushups on the set.

Extended and Deleted Scenes: (10:06) There are six with a handy play-all.

Jeremy Butler is a film school graduate of the International Academy of Design and Technology. He is been writing for Upcomingdiscs since 2012; however, movies have played a big part of his life for much longer. Favorite genres include horror, science fiction/fantasy, and comedy. Favorite movies are V for Vendetta, Boondocks Saints, Kiss Kiss Bang Bang, and The Godfather.
Alien: Covenant (UHD Blu-ray) (4K) Blue Bloods: The Seventh Season