Posted in: Disc Reviews by Gino Sassani on September 1st, 2017 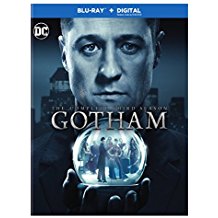 “Enjoy the trip. It’s going to be a bumpy ride.”

It has been six months since the second season ended. A herd of creatures and experiments rained down on Gotham City. They were the product of experimentation by Dr. Strange, played by B.D. Wong. This, of course, is Dr. Hugo Strange, mad scientist, and not Marvel’s Stephen Sorcerer Supreme. Jim Gordon (McKenzie) is no longer a member of the police force but has found a niche as a bounty hunter rounding up the creatures and bringing them in for cash. Gotham City is in chaos and has fallen into the kind of frontier justice. But this is Gotham City. Where is Batman? This is a question you ask only if you haven’t been following along for the first two seasons of Gotham. You can find out more about the show and its setup by checking out our earlier reviews Here. For the rest of us, let’s look at what the third season of Gotham has to offer now that it’s available on Blu-ray from Warner Brothers Home Entertainment.

While Jim is bringing in monsters for $5000 a pop, there are others with their own problems in Gotham City. Young Bruce Wayne (Mazouz) has decided to confront the Court Of Owls. They are a shadow organization who have used Wayne Enterprises for a front and have been manipulating events in Gotham for a hundred years. For his troubles he’s kidnapped and replaced with another one of Strange’s creations. It’s a clone who fools Alfred (Pertwee) and Selina (Bicondova)… at least for a while. Meanwhile the real Bruce has been taken to be brainwashed and trained by a shaman, played wonderfully by Raymond J. Barry. The Court would like Bruce to be the instrument of Gotham’s destruction.

Jim’s on to the Court as well. He finds out they were responsible for the death of his own parents and that his long-lost Uncle Frank (Remar) is on the Court. Together they attempt to bring it down from the inside, but you can be pretty certain that’s going to be problematic.

The new big villain this season is The Mad Hatter. He’s Jervis Tetch, and he’s played by Benedict Samuel. This is not the version of the character you know from the 1960’s series or even most of the comic book run. That Mad Hatter was a villain obsessed with hats/lids and created all types of contraptions and weapons with them. This version did appear early on in the comics but was pretty much a one-off until resurrected many years later. He likes to wear top hats like the Mad Hatter from the Alice universe, even if they are made of newspaper. He is also one of Dr. Strange’s creations. Tetch has the ability to hypnotize people into doing his bidding, but that’s not what makes him quite so dangerous. It’s his sister Alice (Norvind) who is the real big problem here. Her blood has the ability to kill or turn a subject into a raving creature. It brings out the strongest emotions and makes them uber strong. It is Alice’s blood that Strange has used to make many of his monsters. When she is killed, Tetch becomes enraged and determined to infect the entire city with the virus. Fortunately for him, The Court Of Owls is looking for a way to “punish” Gotham City. A weaponized version of the blood virus is the big bad ticking clock in Season Three. And the real horror of it all is that Bruce Wayne might be the one to actually pull the trigger.

Of course, where would the show be without its most colorful and “beloved” villains? Oswald “Penguin” Cobblepot has discovered a way to take advantage of the mayhem in the city. He’s decided to run for Mayor of Gotham City. He also gets Edward “Riddler” Nygma out of Indian Hill to serve as his Chief Of Staff. When he wins he finds out that it’s hard to keep running both a city and a criminal empire at the same time. There’s a lot of betrayal among the city’s criminals, particularly with Butch (Powell), Tabitha (Lucas) and Barbara Kean (Richards) trying to run their own little thing. Fish Mooney (Smith) is back and using some of Strange’s creations to form a new gang. It’s a pretty natural collaboration, since she’s back among the living because of Strange. Selina Kyle has joined up, and unfortunately her friend Ivy sees too much and is almost killed by one of the creatures. What did happen to her is that now actress Clare Foley takes over for actress Maggie Geha, because Ivy has leaped ahead a few years physically. She’s discovering that her new body helps her get her way, particularly with men. It will also change her relationship with Selina.

So there are still plenty of the usual crime drama stories going on involving the usual denizens of Gotham’s underside. The relationship between Penguin and Riddler becomes some of the best stuff of the season. They are wonderful together owing to terrific performances by both Robin Lord Taylor and Cory Michael Smith, who have totally dominated the series with these performances. The chemistry here is wickedly fun. The relationship begins to turn ugly when Penguin thinks he’s fallen in love with Riddler. Yeah, I was worried about the same thing, but this doesn’t turn into that kind of relationship. Instead it leads to a falling out and the wonderful give and take continues, but this time with each trying to kill the other. This turn of events leads to a nice homage to the 60’s show’s Rube Goldberg deathtraps when Riddler uses one on Penguin. This is rich stuff that I expect to take center stage next season. Nygma truly takes on The Riddler role now, and he’s great.

Michael Chiklis gets to give us a little bit of Vic Mackey when he is infected by the virus and becomes The Executioner. Jim has to deal with Le (Baccarin), who starts the season engaged to another guy and finishes the season infected by the virus, which allows Baccarin to do more than she’s been given for the show to date. It makes for some creepy romantic relationships throughout the season. There are two huge teases as the season comes to a close. The first involves a cameo by Star Trek: Deep Space Nine’s resident Dr. Bashir, Alexander Siddig as the iconic Ra’s al Ghul and the final scene which gives us the first hint that Bruce is getting closer to Batman ala Smallville’s Blue Blur.

Ben McKenzie’s Directorial Debut: (2:20) The actor takes his first turn behind the camera.

Madness Rising – The New Villains Of Gotham: (9:57) Take a closer look at the new bad guys, particularly The Mad Hatter.

The Dark Within The Dark – The Court Of The Owl: (12:02)  A look at the mythology of the organization both from the comics and the series.

Gotham is firing on all cylinders right now, and I think the best might be yet to come. The final 2-part episode has Gotham City mired in the virus with anarchy and more than a few debts getting paid off in the final moments. Right now it looks like the villains might be in charge for a while. “Gotham is ripe with crime. Who better than a criminal to clean it up?”

Gino Sassani is a member of the Southeastern Film Critic's Association (SEFCA). He is a film and television critic based in Tampa, Florida. He's also the Senior Editor here at Upcomingdiscs. Gino started reviewing films in the early 1990's as a segment of his local television show Focus. He's an award-winning recording artist for Omega Records. Gino is currently working on his 8th album Merchants & Mercenaries. Gino took over Upcomingdiscs Dec 1, 2008. He works out of a home theater he calls The Reel World. Favorite films: The Godfather, The Godfather Part II, The Body Snatcher (Val Lewton film with Karloff and Lugosi, not the pod people film), Unforgiven, Gladiator, The Lion King, Jaws, Son Of Frankenstein, The Good, The Bad And The Ugly, and Monsters, Inc.
Disneynature: Born in China (Blu-ray) Shakes the Clown (Blu-Ray)