Posted in: Disc Reviews by Gino Sassani on November 8th, 2017 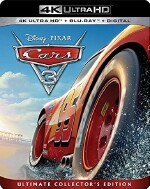 When I go to a Pixar film, I always find myself in a situation where I’m predisposed to love the movie. There have been so many greats like Toy Story and Monsters Inc and so few horrible examples like Ratatouille. So I never really expect a Pixar film to be bad, and Cars 3 certainly wasn’t bad. There are more than a few things to love about the latest collaboration between Disney and their Pixar division. The animation company also continues to push the boundaries of digital animation technology. You can expect some very nice emotional moments. It’s also nice to revisit old friends from previous movies. Cars 3 has all of that, but it still falls a bit short when you compare it to the impressive library of movies Pixar has brought to the Magic Kingdom table. It will certainly be the Cars film that adults will be able to relate to the most. The best that could be said for the effort is that it neatly caps that particular franchise in the stable and will allow the talent led by John Lassiter to turn their attentions elsewhere. I’m really looking forward to The Incredibles sequel. I’m even looking forward to Toy Story 4. But was anyone really anticipating Cars 3?

The film has some wonderful fanboy moments that help the material to rise above such an average story and execution. Nathan Fillion voices Mr. Sterling, the McQueen fan who takes over the company. Firefly and Castle fans will find him a pretty sweet character. There are also some rather nice moments of homage to Paul Newman and his original Doc Hudson character. This is as much Doc’s story as it is McQueen’s, and it was pretty nice what they were able to do with the recordings they had of Newman’s voice. Newman was an iconic actor and also a very big part of the racing world. He was a natural to be included when the franchise began. It’s fitting that this movie in particular pays tribute to him even though he’s been gone for almost a decade. All of the other voices from the franchise are here, but in a slightly more limited way, as McQueen is off with Cruz for most of the film. Still, you’ll get more of Larry The Cable Guy’s Mater than you will any of the other regulars.

Cars 3 is presented in its original aspect ratio of 2.39:1. The ultra-high-definition 2160p  image is arrived at by an HEVC codec with an average bitrate of 45 mbps. This ultra-high-definition image presentation is awash in wonderful bright colors. The shiny car colors just pop off the screen. Here’s where HDR is at its best. Detail is also quite impressive. You can take in more of those cool and humorous details on the car graphics, billboards and environments. Tons of Easter eggs here. The animation will leave you stunned. Just when you think these guys have set a new bar, they fly over it once again. There are some scenes where McQueen trains on a beach. When you look at the sand going through various stages of dampness and the surf coming in and out I started to think: now they’re just showing off. The detail and texture is something brand new in a computer-animated film. Surfaces and reflections are starting to be about as photo-realistic as they can get… until the next time, I’m sure. Black levels provide nice deep blacks and sharp contrast, to be sure.

The Dolby Digital True-HD 7.1 track isn’t very aggressive, but it provides some nice immersive moments. It’s on the racetrack that the surrounds offer the most bang for the buck. The sounds of racing engines and powerful machines zip by you at such an amazing clarity that you might find yourself looking over your shoulder. The dialog is perfectly placed and clear at all times. Subs add to the power of those engines and a lot of depth to the score as well. The music is vibrant as the colors. There’s plenty of ear candy to go around… and I do mean around and around and around.

Deleted Scenes: (26:17) There are five with a play-all option. You also get an overall introduction and a short intro to each scene by director Brian Fee. Of course, these are animated storyboards, because they were dropped before the scenes were finished.

Generations – The Story Of Cars 3: (11:20) the production crew talk about the journey to finding a new story to tell about McQueen. We also learn there were two endings that went down to a photo-finish themselves. You’ll get to see parts of the one that wasn’t used through animated storyboards as Brian Fee explains why it was ultimately discarded. We also get a look back at Paul Newman’s earlier recording sessions for the first film and learn how those unused portions were repurposed for this movie.

Let’s Get Crazy: (7:41) This feature looks at the demolition derby scene and how it evolved. The crew went to some real demolition derbies for research. We also get some funny moments with voice actress Lea Delaria, who voiced the manic Miss Fritter in the film.

Cars To Die(cast) For: (5:21) There have been over 1500 Mattel toy cars released from the Cars franchise. We get a look at a ton of them here.

Legendary: (11:22) Here we see some of the inspiration for the film as the crew give us a bit of NASCAR history going back to the bootleg drivers of the 1920’s. You’ll learn about two of these drivers and see how they inspired characters in the film.

Fly Throughs: These are like set and location tours of the virtual environments.

My First Car: These three short animated films deal with a member of the film crew talking about their first car, and each is well under two minutes.

Gino Sassani is a member of the Southeastern Film Critic's Association (SEFCA). He is a film and television critic based in Tampa, Florida. He's also the Senior Editor here at Upcomingdiscs. Gino started reviewing films in the early 1990's as a segment of his local television show Focus. He's an award-winning recording artist for Omega Records. Gino is currently working on his 8th album Merchants & Mercenaries. Gino took over Upcomingdiscs Dec 1, 2008. He works out of a home theater he calls The Reel World. Favorite films: The Godfather, The Godfather Part II, The Body Snatcher (Val Lewton film with Karloff and Lugosi, not the pod people film), Unforgiven, Gladiator, The Lion King, Jaws, Son Of Frankenstein, The Good, The Bad And The Ugly, and Monsters, Inc.
Westworld: Season One — The Maze (UHD Blu-ray) (4K) The Killing of a Sacred Deer