Posted in: Disc Reviews by Archive Authors on March 13th, 2005 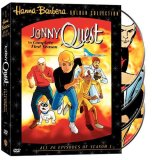 This show the bomb diggity yo! Seriously though, Jonny Quest in a way revolutionized cartoons in the sense of realism that they tried to convey. Some of the cartoons that have come out since have done a pretty good job of it, but not too many shows were touching on topics such as laser technology, rockets and other concepts then looked at as “futuristic.” And put up against other shows of that era, the animation on Jonny Quest had an almost comic-book like feel to it, and it was a nice change of pace from the …artoony feel of the Jetsons.

The show is focused around Jonny, his father, Dr. Benton Quest, the inventor and pre-eminent scientist of the era, Race Bannon, a man assigned to guard the Quests from any potential threats, as his innovations when in the wrong hands could pose a danger, Jonny’s friend Hadji, from the streets of Calcutta, and Jonny’s dog bandit, named for a patch of black fur that runs around his eyes like a mask, hence the name. The group traveled to exotic locations for every episode, battling numerous villains, some real, some not, some we’ll just call “fabled,” like gargoyles and abominable snowmen. For its 40th anniversary, Warner Brothers rolls out the 1st season of Jonny Quest, all 26 episodes, in all its glory, as part of the Golden Collection of animated DVD releases from Hanna-Barbera.

The audio is either in Dolby mono English or Spanish. Considering the time period and the fact that it’s a TV show, everything sounds clear without any distortion or other sound issues.

If you’re looking for a widescreen anamorphic transfer for a 1960s cartoon, then you’ve got another thing coming, but the full frame presentation breathes some new life into the picture, with colors more vibrant than I recall seeing in the past.

26 episodes cover this four disc set, with 7 episodes on each, and the 8th features the extras for the set. The extras are pretty meager, starting with Jonny Quest: Fun Facts and Trivia, which doubles as a trivia track done pop-up video style, and it covers the show, the creators, the characters, and other different aspects of the show.

Jonny Quest: Adventures in Animation is a 15 minute look at the show from various animators of today, ranging from Alex Ross to Brad Bird (The Iron Giant). Everyone recalls what made the show so appealing to them, and they also discuss the history of the show and how it influenced them. Jonny Quest Video Handbook is comprised of biographical information on the characters and villains, and some detailed information on the gadgets, weapons and locales the show was set in, and there’s even a 1 minute commercial for some sneakers that ran on the show also, featuring Race and Jonny. Trailers for other Warner animated sets, including the Flintstones, Scooby Doo, the Jetsons and Samurai Jack round out the set.

The $64.98 SRP is very steep, but most online places are selling it in the $45-50 range. You get an action packed show that old fans will pick up, and people curious with the cult following should give this a shot as well.

Men Behaving Badly – Seasons One and Two Band Wagon, The