Posted in: Disc Reviews by Archive Authors on April 25th, 2005

Blade: Trinity caught a lot of flack from most critics, and even the movie going public as per the box office returns (only grossing $52 million domestically). When I went to see this film in the theatre, half of my party was extremely disappointed with the flick. The other half, including myself, thought the film was quite entertaining. I must admit, this film does not come close to the original Blade, but I did find it a little bit more entertaining the Blade 2.

The biggest change…to this sequel is the addition of Ryan Reynolds and Jessica Biel to the cast of Vampire Hunters. Reynolds is a breath of fresh air to this series with his wit and humor, and Biel, well, she looks great. Reynolds one-liners were a little much at times (which turned many viewers off), which made this picture more of an action-comedy then an action-horror. You could tell they were stretching for a premise this time around, but the cast pulled through for the most part. I don’t think you will get a consensus on this films quality, but if you are looking for some over the top action and some cool special effects, this film is worth a watch.

“Wesley Snipes returns as the day-walking vampire hunter in the explosive third and final film of the Blade franchise, Blade: Trinity. For years, Blade has fought against the vampires in the cover of night, with the world above unaware of the brutal ongoing war. But now, after falling into the crosshairs of the FBI, he is forced out into the daylight, where he is driven to join forces with a clan of human vampire hunters he never knew existed – the Nightstalkers. Together with Abigail (Jessica Biel) and Hannibal (Ryan Reynolds), two deftly trained Nightstalkers, Blade follows a trail of blood to the ancient creature that is also hunting him … the original vampire, Dracula.” – New Line

New Line sure does put a lot of effort into making these Blade discs look amazing. This discs video is of reference quality. The 2.35:1 anamorphic widescreen transfer is near flawless… which is very hard to say with a film that has so many dark sequences. The contrast is excellent, the colors are crisp and vivid, and the blacks are deep and clean. There is very little in terms of digital artifacts, and the print is clean from dust & debris. Amazing job New Line!

Almost as astonishing as the Video is this discs Audio offerings. You get a DTS-ES and a Dolby Digital EX 6.1 mix, both of which kick ass. The DTS track packs a little more punch, but both tracks do this action-packed film justice. The surrounds are used to bring the soundstage to life, and the score (which is a little too loud) brings you right into the action. There is ample bass to shake you subwoofer, and the dialog comes off clean. Paired with the video transfer, this disc will make a great audio/video showcase.

This disc sports two audio commentaries on disc one. The first, with Writer/director David Goyer and actors Ryan Reynolds & Jessica Biel, is very entertaining. This commentary is full of jokes, insight, and is worth a listen. The second, with Goyer, editor Howard Smith, production designer Chris Gorak, cinematographer Gabriel Berstain and producers Peter Frankfurt and Lynn Harris, is more of the technical track. This commentary is, as expected, is more dry then the first. You do learn a lot by listening to it, but you might not make it all the way through.

Disc two is where you will find most of the extras…

Many will argue that Blade: Trinity is the worst in the Blade franchise, but it could depend on what you are looking for. If you want a true action/horror film, my aforementioned statement is correct. But if you are looking for more of a comical edge to the action, Blade: Trinity will be right up your alley. This disc is a treat to explore… from the reference quality audio and video, to the plethora of extras. This disc is a must add to your collection, especially if you are a Blade fan. 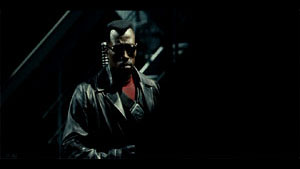 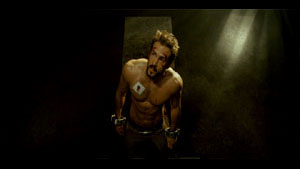 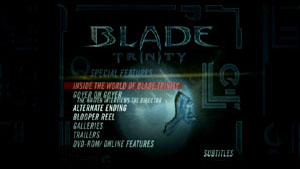