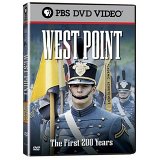 Why give a DVD about West Point to a guy to supports the Army? You’re probably going to get a lovefest DVD review about just how awesome the Army is anyway. Well, I’ll do my best to keep things in check. Besides, as an enlisted man, I hated officers (or just didn’t respond to too many of them), but I tried to keep an open mind.

As it stands, West Point: The First 200 Years, which was produced by PBS, is still a decent look at how the United States Military Academy has evolved to wh…re it is today. The standards to get in are tough (if you don’t have a Congressional or even Presidential recommendation, or have above average grades and SAT scores, you may not want to bother), but the rewards are there. A four year education runs into the low to mid six figures, and you’re challenged physically, emotionally and intellectually. You already have the first few years of your post-graduate life marked out for you in the active duty Army, but other than that, you’re part of a legendary history.

Narrated by Andre Braugher (Homicide Life on the Street), the feature covers the origins of the Academy, from its founders to locations, and discusses how the Academy dealt with issues through the years (such as integration), along with covering the high and low times the Academy has gone through. It’s not without interviews by various alumni and other figures with close ties to the Academy (I wouldn’t have thought Gore Vidal would be one, but oh well). They cover the notable graduates of the Academy (Eisenhower, MacArthur and Bradley to name a few), and talk about its place in America.

While some of this information was new to me, there was another part of it that I found a bit old, and I wanted to see more of the daily interactions of students, either through hazing (or its more common name, Beast Barracks), Drill, or whatever, but I was glad I saw what I did. It’s a very good topical look at the Academy.

Nothing to jump up and down about here, as the Dolby Digital 2.0 surround track sounds good, but not exceptional. The sound from the rear speakers is almost non-existent, and there aren’t any decent ambient sounds to get them working either.

While the video format isn’t readily available (and most online sites list it as 1.33 fullframe), the disc appears to be in a 1.78:1 widescreen presentation. The image pulls from a lot of historical news footage and some current interviews, along with some exterior shots, and the image looks a bit dull, and not as clear as one would expect. While there aren’t any artifact issues to speak of, it doesn’t look sharp at any point through the viewing.

Short of some PBS Features, nothing else is on the disc.

The historical look at a revered American institution is fairly well done here. While one would want them to examine things in greater detail, it’s hard to put over 200 years of history into a 2 hour piece. It’s still interesting regardless of your views.

Gino Sassani is a member of the Southeastern Film Critic's Association (SEFCA). He is a film and television critic based in Tampa, Florida. He's also the Senior Editor here at Upcomingdiscs. Gino started reviewing films in the early 1990's as a segment of his local television show Focus. He's an award-winning recording artist for Omega Records. Gino is currently working on his 8th album Merchants & Mercenaries. Gino took over Upcomingdiscs Dec 1, 2008. He works out of a home theater he calls The Reel World. Favorite films: The Godfather, The Godfather Part II, The Body Snatcher (Val Lewton film with Karloff and Lugosi, not the pod people film), Unforgiven, Gladiator, The Lion King, Jaws, Son Of Frankenstein, The Good, The Bad And The Ugly, and Monsters, Inc.
Miss Congeniality 2: Armed and Fabulous Hellraiser: Deader