Lincoln and Lee at Antietam: The Cost of Freedom

Posted in: Disc Reviews by Archive Authors on February 24th, 2006 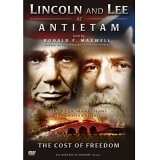 Lincoln and Lee at Antietam: The Cost of Freedom delves into what is, without doubt, the single bloodiest day in American history. In 12 hours, we lost about 24,000 people – nearly eight times the carnage of 9/11. As historical events go, The Battle of Antietam is one of the most vivid reminders we have of the realities and the horror of war. It was also one of the first battles in the history of the world whose carnage was put on display for all to see through actual photographs. After Antietam was in the boo…s, a studio opened in New York and made available for public viewing pictures containing the bodies of soldiers from both sides, twisted and broken on the battlefield. Unfortunately, the years which have passed since that day have lessened the impact of the battle, but this new documentary succeeds in taking us back to that time, and forcing us to appreciate the lives of these men and the fear they must have felt.

War should never be a course of action – it should always be a course of reaction, and an extreme one at that. This documentary does a fine job of making us see such a truth, and Antietam is an excellent example of how the Civil War was altered from being a war of rebellion to becoming one of freedom for all men. It was this hard-fought and costly victory that allowed Lincoln to be effective in his release of the Emancipation Proclamation, and though by no means does it represent the end of the War, it’s where the tide turned for the North, and freedom became a reality rather than a possibility. I highly recommend this documentary to every American. It succeeds at presenting both the broad picture and the personal intimacies of the participants. And it does so without any partisan fat connected to current political climates. It’s simply about remembering these men and this battle – not judging them – and that’s the kind of neutrality we could use more of in our history books. The only drawback is some of the narration is overdone by the actors, but it’s just a minor complaint to an all together informative, entertaining viewing experience.

This is one area that could use some improvement, especially on re-enactments which take place at night. There is a thick sheet of grain confined to these scenes. Black levels are also not quite as deep as they should be. In day scenes and interview segments, however, the 1.85:1 anamorphic presentation boasts rich colors and clarity. Overall, it’s a mixed bag of highs and lows.

The audio fares better with a strong 2.0 track that offers good dialogue levels on the high end, and strong but subtle background noise on the low. Cannon and rifle fire set the atmosphere in those night scenes where the video presentation fails, but they never take away from the centerpiece of the film – which is information related by experts on the battle and the lives of the two main historical figures showcased.

An interview with Ronald Maxwell provides a few additional details of interest to history and historical film buffs. He takes us on a mini-journey into the ordeals of making an historical picture (such as his two acclaimed features Gods and Generals and Gettysburg). There are also some trailers for other similar DVD releases as well as a feature-length commentary by narrator Maxwell and Director Robert Child.

At 90 minutes, Lincoln and Lee could have been longer, but it does so much with its time. It takes you into the lives of all the major players (as well as some of the more interesting minor ones), gives you a sense of what kind of people they were, and chronicles all 12 hours of the battle, using eyewitness accounts and a sampling of the actual horrific photographs. The special features lack the same detail, and honestly, the main feature would probably work better as bonus material than it does as a standalone presentation. But that’s not to detract from its quality. While video specs need improvement, the audio is sufficient, and so is the overall package.