Posted in: Disc Reviews by Archive Authors on October 11th, 2006 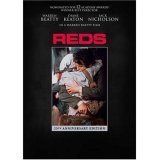 For those who enjoy the films of Warren Beatty, perhaps his quintessential film, the epic Reds has finally arrived on DVD. The film, which earned 12 Oscar nominations in 1981, including a remarkable four for Beatty (as Director, which he won), Actor, Writer and Producer), the film was a clear labor of love for the left-leaning political activist. Beatty plays John Reed, an American political writer who becomes more and more enamored with the ideas and concepts behind a blossoming ideological…revolution in World War I era Russia.

Reed meets Louise Bryant (Diane Keaton, The Family Stone) and falls in love with her. Or more to the point, she falls in love with him, and while he’s somewhat resistant to the idea of monogamy (it falls out of line with his idea of community living and sharing the wealth), Louise becomes disenchanted with him and starts seeing one of his friends, a playwright named Eugene O’Neill (Jack Nicholson, The Shining). While Reed’s idea of romance ultimately comes back to being devoted to her, it’s O’Neill’s way of trying to put her on a pedestal that she desires, but ultimately turns away from when Reed returns to the US after a trip to Russia and decides to propose to her.

Reed was always intrigued by and became more involved in leftist politics on the political scale, and with discussions with Emma Goldman (Maureen Stapleton, Nuts), Max Eastmann (Edward Herrmann, Gilmore Girls) and Louis Fraina (Paul Sorvino, Goodfellas), decides to travel to Russia again and again, to help try and get recognition from the Russian government and (a Lenin look-alike of) the Communist party he wants to organize.

Now as a viewer I’ll say that politically, I’m a little bit right-leaning, but Beatty’s film doesn’t hit you over the head with its politics, and the guise of the romance between Beatty and Keaton’s character is the bigger attraction for the film. Reed’s enchantment for a system that the Bolsheviks may have wanted, but the “more mainstream” communists ran with in Russia and failed a few years ago seemed to overcome it all during the era. But while the efforts and the heart that Beatty put into the film is admirable, the film itself seemed like one with some nervous romantic comedic scenes, set against the backdrop of the Russian Revolution. And while scores of people love this movie, and clamor for its reintroduction to the video market, I really hadn’t made up my mind. After seeing it, I don’t see what the hubbub was all about. Roger Ebert said that loving the movies “is not important to have a ‘good time’, but very important not to have your time wasted.” And after watching 195 minutes of Warren Beatty fall in and out of love with Diane Keaton while trying to make revolution a not so bad thing, let’s just say that my time wasn’t wasted, but I was using 409 on it afterwards.

The film was recorded in Dolby Mono way back before the introduction of a neat thing called stereo. For the DVD release of the film, there is a remastered surround track for home theatre. Unfortunately, it’s not too overwhelming when it comes to surround activity, and the sound mix sounds a little erratic and a bit muted. Stick with the mono track, you might have a better time.

In its first digital video incarnation, Reds is presented in a 1.85:1 anamorphic widescreen production. The image itself is replicated well from its first run, the image itself is fairly soft and the color palette doesn’t employ a lot of bright stuff. But the problem is that the image appears to have some grain and dirt in it from time to time. Hey, for a 25 year old film shot in a small army of various worldwide locations, it’s not the end of the world.

Aside from a trailer announcing the DVD release of the film, the only other extra is a documentary on the film, broken down into several sections and featuring a load of new interview footage from Beatty. In it, he starts by disclaiming everything by saying that he “basically disapproves of it” when it comes to adding cheesy extras to DVDs, but he does get into quite a bit of detail on how he managed to get the film made. He also discusses how he works as a director on set, along with his thoughts on the cast and casting the film. Close Beatty friend Nicholson, along with Sorvino and Herrmann, talk about the production of the film too. There’s also a focus on the witnesses for the film, and from there the usual discussion of production logistics follows, like how to shoot a film called Reds without getting any real help from the Russian government. Storaro discusses how he almost walked off the film as a creative difference with Beatty grew, but the two managed to patch up their differences and have collaborated on several films since. Overall, it’s a rather extensive look at the film from the participating surviving cast and crew members.

Whether I like it or not, Reds remains a vital and favorite film by many people. The interviews provide a good supplement to the feature, and the picture looks fairly solid. All in all, at a cheap price, it’s a touchstone for any Democrat, and is worth picking up if you’re one of them.