Posted in: Disc Reviews by Archive Authors on November 10th, 2006 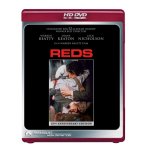 Warren Beatty attempts directing for the second time in Reds, a film based on the life of John Reed during the Russian Revolution. I didn’t know what to expect from this film, as I had never heard of it prior to its release on HD DVD. I have never seen a movie based on this subject matter, so the movie covered all new grounds for me. Upon investigation I discovered the movie was nominated for twelve Academy Awards and won three, including Best Director for Warren Beatty. Boasting an impressive cast including W…rren Beatty, Diane Keaton, Jack Nicholson, Paul Sorvino, and Gene Hackman, this movie seemed to have a lot of potential.

John Reed was an American journalist and communist activist best known for writing Ten Days that Shook the World. He was married to writer Louise Bryant; they had a hot and cold relationship, which is one of the main themes portrayed in this movie. Of course the others being John Reed’s quest to document the Russian Revolution, and the years beyond it. We learn about things such as communism, the insecurities of the main characters, and observe their somewhat repetitive back and forth bickering. Interestingly, Beatty decided to tie in actual interviews with people who knew John Reed throughout the movie, which gave us real life perspectives about Reed as well as tying together different parts of the story. I enjoyed those parts, as they didn’t interrupt the flow of the movie and it added an insightful sense of realism to it.

Beyond covering Reed’s numerous speeches in America and his time in Russia, the movies main storyline followed a love triangle between Jack Nicklson (O’Neil), Warren Beatty (Reed), and Diane Keaton (Bryant). To my surprise it was actually very interesting and unconventional, good movie material. But in a sense the interest I gathered in the characters slowly diminished over the 195 minute runtime, which was definitely too long, making the movie really slow at times. It failed to truly captivate me because the parts I enjoyed were too far between. As far as realism and authenticity are concerned this picture did a great job, but that’s all for nothing if it can’t keep my attention.

The best thing about this movie was the acting that was impressive all around, especially by Jack Nicklson who to was superb as usual. Beatty did a great job as both the star of the film and the director as well, who was justly rewarded with the 1981 Academy Award for Best Director. The actors made the story feel real, which made it easier for me too watch, and even learn something about the Russian Revolution.

Ultimately, this movie had an A-List cast who did a great job acting with what was essentially a movie that was too long. In the end the movie was decent and was a somewhat educational experience for me as well. I’d recommend this disc to history buffs, anyone looking to see some great acting, and of course anyone who has seen the movie sometime in the past twenty-five years and enjoyed it.

Presented in a 1080p 1.85:1 aspect ratio, Reds looks very good for a film being twenty-five years old. I was not expecting much from this disc but I was really surprised how good it looked.

From the opening scenes it was apparent that Paramount tried to clean this film up as best they can, faces looked very clear and colors looked crisp right off the bat. The film takes us from New York to Russia and both landscapes provide a good amount of detail, with few traces of dirt and softness. One notable flaw of the transfer would be the grain seen throughout many of the dark shots in the movie, at times it seems the shots were filmed in a thick haze. Besides the occasion dirt and few dark scenes with grain, the video holds up well, Paramount provided a very solid transfer.

Reds is encoded in 5.1 Dolby Digital Plus, but of course isn’t the type of movie to show off your sound system as most of the film is pure dialogue, but that being said the audio track does sound good. A few scenes I did notice some echoing in my rear speakers, specifically when Reed was giving a speech in Russia. Considering it came from 1981 it wasn’t that bad, but I think Paramount could have done more for this film audio wise.

Reds does not feature many extras as it is apparently Beatty is not a fan of them, that being said the documentary provided was interesting enough. The documentary is broken up into seven pieces (Witness to Reds, The Rising, Comrades, Testimonials, The March, Revolution part 1 and 2, & Propaganda), which talks about the making of Reds. This includes recent interviews with many of actors including Beatty and Nicholson. I found these mini documentaries very informative and interesting. Also included is a promotional trailer of the release of Reds on DVD.

At times Reds is very interesting, but it is countered with a long and dragged storyline with the interesting parts too far between. I didn’t expect much out of this picture before I watched it, but now having seen it; it was an overall decent film with solid acting. The disc itself boasts an impressive video transfer, as well as a decent audio track. This is the best looking transfer that this picture will see, so fans of the movie shouldn’t hesitate at purchasing it. The only reason I’d suggest not buying it is if you base your decisions on buying a movie on its extra content, then you will be disappointed.