Posted in: Game Reviews by Michael Durr on April 8th, 2007 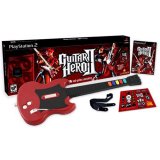 When I got my XBOX 360 in late November, the only game I was regularly playing on my Playstation 2 was Guitar Hero II. It was still captivating, it held my interest because it was an amazing game. Needless to say when they announced that it would be coming to the 360, I was both excited and a bit perplexed as what to do. I mean it is the same game right? It has updated graphics and sound, and exclusive songs. But it’s going to require me to buy another guitar. It has achiev…ments! So you can see the true crossroads I was put at. However, in the end I plunked down the ninety dollars (yes it is that much) for again one of the finest experiences in gaming. I am happy to also mention that the extras or exclusives to the 360 version are appreciated and can only increase in time for us as we move forward.

Guitar Hero 2 was never a master of graphics. It never had to be. However, with HD and 360 games going hand in hand, they decided to upgrade. Now, sporting 720p, 1080i and even 1080p graphics, the characters look less blocky and more realistic (well except for the Grim Reaper, though if you have seen him lately, you might want to call in sick on Monday). Colors are fuller and thankfully the playing board is unchanged. One issue with this version; they upped their use of flashing lights. Now, this doesn’t sound like a big deal; but people do suffer headaches, dizziness, and even seizures in some extreme cases from games where this is common. I have a very mild form of this; and I did get a slight headache from playing this game. However, that was usually only from playing it for about three straight hours.

Wham bam, thank you for Dolby Digital 5.1 ma’am. Finally, a music oriented game and the 5.1 to support it. All of your speakers will be at full blast when you turn on this game. The sound is rich and rocking throughout. The Playstation 2 version did suffer some from the cover singers not sounding like their real life counterparts. This is still true but you simply do not notice it as much in the 360 version because of the full sound. Truth, be told some of the originals probably never sounded this good. Acts such as Black Sabbath, Van Halen, Pearl Jam & Stone Temple Pilots among others are included here and provide maximum enjoyment.

Gameplay
Now there are some who might be experiencing Guitar Hero for the very first time with the 360 version. We get a brand new guitar which is kinda oddly shaped and strikingly white. I guess to match the current color of the 360. It still plugs into your console which is unfortunate as many controllers for the 360 have went wireless. However, Microsoft holds a very firm license on this sort of thing for their console. I would imagine that this gets lifted once people see the sales of this game. The controller does feel different from the one found in the PS2 as the fret buttons are a tad smaller. To be honest, it isn’t a big deal though. In addition to the unique shape and color there is a noticeable difference with this version. On the cord that plugs into the 360, it actually comes apart in one area. Why do you ask? Supposedly, the people at Red Octane will be making pedals for their games. This sounds cool, but as long as it is not a mandatory thing and it only adds to the experience, I am all for this one.

Hopefully by now, you are familiar with this game and what you are doing. If not, you have notes and chords that go across the screen. As they move into position you move your fingers onto the frets and strum with your other hand. As you hit notes in a row, your multiplier increases and your points per note and chord increase. Along the way if you hit certain passages perfectly, you get star points. When you get enough of these star points for your meter to fill at least half way you can unleash the star power. This makes your multiplier go all the way up to 8x the points and where you can rack up the serious tuneage. There is also a practice mode which is sorely needed as some of the songs (like Monkeywrench and Madhouse) have some very fast passages that are difficult to master. Co-op is also included here but sadly it is not XBOX Live compatible. So this would require you to have a friend and another guitar fairly close. This might be a future upgrade but it is unfortunate to not see it just yet.

Difficulty has a tendency to be unbalanced or at least that is the impression I got. Easy is way too easy (you should get perfects and five stars on most of them no problem). Medium is just about right though most of the good players will breeze through this as well. Hard, well is an adventure (expert is just insane mostly). What makes Hard so well hard, is not only do they add the fifth fret, but they also increase the speed quite a bit. I think there really needs to be a fifth difficulty between the medium and the hard that adds the fifth fret but little or no speed increase. Practice helps with this a lot but when Psychobilly Freakout comes on, all the practice in the world might not help.

Guitar Hero 2 for 360 basically separated itself from its PS2 counterpart on this category (along with graphics and sound). Red Octane decided to include 48 main songs with a few exclusives. These exclusives weren’t just filler either. They include Possum Kingdom by the Toadies, Dead by My Chemical Romance and my new favorite as of late; Rock and Roll Hoochie Koo by Rick Derringer. Also, a few new exclusives to the bonus songs which are now a staggering 26. 74 songs in all. It will take you sometime to play through these especially on all 4 levels of gameplay. But that isn’t all. In the future, possibly as soon as in the coming weeks, there will be songs to download on XBOX Live. Songs from Guitar Hero 1, new songs, you name it. This really becomes the platform that Guitarist wanna bes will enjoy this game on as there should be always new content for us to enjoy. Furthermore, seeing your score on a Live Leaderboard will excite and possibly depress the heck out of you. (I tend to fall in the upper 10% to 25% on each song which isn’t too bad). Achievements also make their debut for Guitar Hero and range from way easy to way hard. For most people, expect to get between 20-30 out of the 50 achievements.

Guitar Hero and every incantation of it has been among my favorite games. It’s simply addictive and holds my attention for hours at a time. All of us wanna be rock gods strive to take a guitar and make it our personal play toy. Guitar Hero lets us do just that. Furthermore, the 360 version takes it into the realm of where it belongs. More songs, more modes and actual downloadable content. Add that to improved graphics and audio flavor and you have an outstanding package. The only places of concern is the fact you have to buy a new guitar (and it’s not quite as good as the PS2 one), the more noticeable use of flashing lights (only effects some of us) & no Live Multiplayer mode as of yet. However, those aside, it is as close to being a perfect game. I rarely use perfect so let it be known that this is the most fun legally you can have with an imaginary guitar. Rock on, rock on!

Michael Durr has been reviewing movies for the better part of fifteen years now. He primarily enjoys thrillers, sci-fi, animation and even a little courtroom drama. His favorite films include Escape from New York, the Goonies and anything with Alyssa Milano. When he’s not praising Kurt Russell as the greatest actor of our time or scratching his head over a David Lynch flick, he’s spending time at home in Texas with his lovely wife, Lori and his amazing son. How they put up with him is a mystery, but even Basil Rathbone doesn’t have the time to solve that one.
Dances With Wolves Highly Defined – The World of High Definition