Posted in: Game Reviews by Michael Durr on October 28th, 2017

During the 31 Nights of Terror, we here at Upcomingdiscs.com always like to do something a little different. Lots of other sites could sit here and write an essay on why Silent Hill is the greatest horror movie of all time…wait what? I was supposed to say Psycho or The Exorcist? Hrmmm, that’s funny, I could have sworn I wrote it right for my notes. There has to be a reason, or it could be a fancy way of saying this 31 Nights of Terror, your favorite author’s posts (That’s me) will be focused on scary games rather than scary movies. The first such game is Oxenfree, we’ll call it a ghost tale. And by the way, the original Silent Hill movie was quite awesome, seriously. 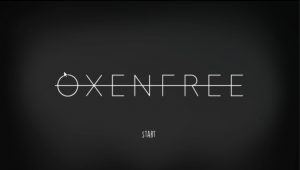 The game starts on a ferry, apparently the last ferry to Edwards Island. You play as Alex, a teenager who is accompanied by her friend, Ren and Jonas her new step-brother. This sets the dynamic between the three main characters before they get to the island. They are going to the island for a little party and are set to meet their friends, Clarissa and Nona.

The three dock on Edwards Island. As they travel to the next location, we learn about various things like the island’s only permanent resident, Maggie Adler has died. We are also introduced to Alex’s radio which is a central focal point of the game. Tuning the radio to various frequencies will advance the story as well as solve a few “puzzles”. They soon reach the beach with Clarissa and Nona. We also get introduced to a spirited game called “Truth or Slap”.

After some banter back and forth, Alex, Ren and Jonas decide to go explore the caves. The radio frequencies we spoke of earlier apparently will cause supernatural events. Ren decides to take a little something to calm his nerves and that leaves Alex and Jonas to investigate the supernatural rift. This is where things get interesting and our tale really begins. 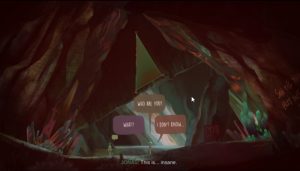 This game could certainly be described as having a quirky style. The graphics (if it wasn’t for the lush backgrounds) could easily be mistaken for something out of the 16-bit era. Characters are small, can be confused for one another (is that Ren or Jonas?), and things that need to be found can be missed quickly. Looking for speech bubbles, circles and triangles are your best bet on reliably interpreting things.

But the backgrounds are well drawn and they do play to the mood of the game which is exactly what you expect. Despite the watercolor style, I never felt helpless or squinting at the screen to determine what something was. The graphics in a sense (along with the music) put me at ease.

One of the things I did not expect with this game was the impressive soundtrack. The music for this game was actually composed by Andrew Rohrmann and more than suitably fits the mood of the game. It’s creepy and nostalgic. It has touches of something that would be completely digital to something that would come out of an old cassette tape machine. Alex’s radio feels like a relic out of the last 70 years (it was actually recorded through a World War II shortwave) and brings some authenticity to what some would wrongfully describe as a gimmick for game-play purposes.

Voice acting is also excellent. The five characters (and course voices from beyond) are all done exceptionally. They set the mood and despite their “valley” characteristics, never feel out of place. Since events change based on your choices, there is also additional dialogue which really makes you pay attention to the depth of the characters.

One misstep I did find related to sound however was the subtitles. The game starts rather quickly, and rather than give you an option to turn them on, they don’t (instead you better get to the options menu fast). Furthermore, if you are trying to read the subtitles and then a speech bubble decision comes up, you better click on it instantly. I’m also sad to report that the subtitle option does not save from play session to session. The player has to remember to put it back on before they start playing again.

At the game’s core, it could be described as a walking and talking simulator (that would be a very simple definition). One walks the main character (Alex) from location to location and at various points in the conversation is given several choices of what to say. This is handled through picking the appropriate speech bubble.

These choices lead to consequences, both minor and major that will actually alter the story and events around you. This is a nice change of pace from say, Telltale games where often you feel as if no matter which choice you choose, the story will end up basically the same. Not to spoil anything, but there is even a life or death choice or two within the story. It also creates a way to absorb you even more into the story.

The other game play mechanic worth explaining (there is also some rudimentary climbing and jumping) is Alex’s radio. At certain points in the game the radio will be used (by turning it to the correct frequency) to solve puzzles or see anomalies from small rock formations. This is done by hitting the RB button and then using your right analog stick to tune the dial. Later in the game, you will even gain access to a new radio which will further strengthen your abilities.

The game never really lends itself to a easy or hard mechanic. Sure, you can “beat” the game fairly easily, but this game (and its achievements which I will explain shortly) is geared towards getting all of the endings and making key choices that lead to a specific outcome. There are a good number of collectibles as well and these will take some good observation skills (or a guide) to complete. 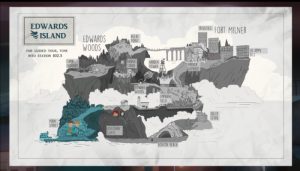 As explained above, when the credits roll, it is not the end of the game. Most players will find themselves wanting to go back and try again with different choices and decisions. Or perhaps even to find all of the collectibles such as letters and anomalies. There also hidden items to be found which can serve to tap into perhaps a special website. Furthermore, there is only one save slot (and it auto saves between areas) which really make you play the game again to explore the differences.

The achievements are also geared around this. There is only one game related story achievement that you cannot miss and that’s for completing it. The other twelve achievements revolve around specific decisions or getting some or all of the collectibles. You will happen into some of them (for example, there is an achievement for getting Ren and Nona to date and also for them not to date) but this will take anywhere from three to four careful playthroughs to accumulate your one thousand gamer-score.

One particularly clever achievement that I must mention is the one labelled ‘The Strong Silent Type’. This requires you to play the whole game not saying a word. As I mentioned, the speech bubbles go quickly. Well, anytime you get a decision, don’t make it. Let the characters talk around you (this does not apply to the circles/interactive objects or where the game forces you to say something) and see how well the game still holds up. Now it will take one entire playthrough to do this, but it’s well worth it on your second or third time. 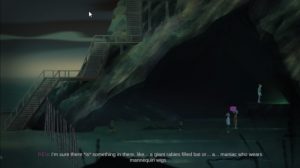 In the achievement/trophy gaming world of today, most games are the complete once and grind the living crap until you are blue in the face and sick of the very existence of the game. Two hundred and fifty collectibles, no problem they say. That’s not the case with Oxenfree. It is a wonderful dialog driven game with a creepy atmosphere that is a mixture between X-Files and a teenage thriller picture. Your choices have consequences and the achievements and gameplay are geared towards playing it over and over again.

It is important to note that while I am reviewing it on the Xbox One console, it is also available on PC, PlayStation 4, mobile devices, and even the Switch I believe. Furthermore, it is right now only $5.00 (until October 31st) to Xbox One gamers who have a Gold membership. This one will take 10-15 hours of your time (to get all of the endings and collectibles) and is one of the best games of its type I have ever played. So pick it up, you won’t regret it. Enjoy.

Michael Durr has been reviewing movies for the better part of fifteen years now. He primarily enjoys thrillers, sci-fi, animation and even a little courtroom drama. His favorite films include Escape from New York, the Goonies and anything with Alyssa Milano. When he’s not praising Kurt Russell as the greatest actor of our time or scratching his head over a David Lynch flick, he’s spending time at home in Texas with his lovely wife, Lori and his amazing son. How they put up with him is a mystery, but even Basil Rathbone doesn’t have the time to solve that one.
Bushwick (Blu-ray) “31 Nights of Terror” The Park (Xbox One)