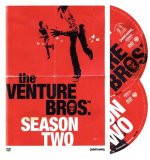 *Booming Voice*, “When we last left the Venture Bros season 1, the incredible arch-villain Monarch had been imprisoned for a crime he didn’t commit and the Venture Bros were suffering from the loss of their boys Hank and Dean, Meanwhile…” *Monarch voice*, “Where the heck are my cue cards, can’t an arch-villain get some normal cue cards for once and how come there is nothing about the sweet Dr. Girlfriend anywhere in here, I mean who really cares about the f****ng V…nture Bros and their miserable excuses for children; Buddy Holly and Fred from Scooby Doo?” *Twenty-one and Twenty-four* “Sorry Monarch.” So welcome to another exciting season of the Venture Bros, arguably one of the best animation series on television. Hopefully you know the main characters by now as this is season two. (and thankfully the series has been resigned for a seasons 3 & 4, however we might not see them until 2008). Venture Bros can be described as 4 parts Johnny Quest, 1 part Hardy Boys, 1 part Tick, and even a little Scooby Doo and then throwing that into a big sarcastic machine with lots of sexual innuendo and tons of other classic references before spitting out an animation show.

So we have Season 2 and the stories have been improved a good deal from Season 1. There is not as much origin going on but they still touch on it from episode to episode (or whatever they feel like making up). The show’s jokes mostly hit (some do miss) and most of the episodes result in side splitting laughter. It’s not a perfect show by any means but what it is good quality animation for the adult kid in all of us. The references often range from Star Wars to David Bowie to Duran Duran before touching on Star Wars again and everything 80’s in between. Which is good for us adults as well since we never got to live enough of that decade. The episodes themselves do sometimes suffer from overdoing it. Each show has roughly 3-4 subplots and about 50 references or so it seems. Often you will have to rewatch a show a couple of times (including perhaps an extra time with the commentary) to catch each joke and maybe understand it.

The video is in the standard 1.33:1 television aspect ratio with flashes of widescreen occasionally as it is needed. This show is great in the video department as even though it is spoofing animated classics from the 70’s and 80’s; it improves on it while keeping the classic look. Colors are awesome and rich. They did a lot of quality work and it really shows their dedication to the craft.

I get simply wowed when I popped in the two discs for audio. We actually get 5.1 Dolby Digital audio which is rare for animation television shows. It is super loud too; causing my subwoofer to rumble in delight. Explosions, talking off in far right corners, and anything else that makes a boom noise sound great here. Absolutely one of the best sounding animated dvds you will ever come to find. We also get a 2.0 mix along with English, French and Spanish subtitles.

Episode Commentaries: The creators Jackson Publick and Doc Hammer sit around for each episode and basically participate in something of a love fest for the show and themselves. It’s entertaining and disturbing at the same time. They really hit some funny moments and tell some great stories but they are rarely on topic. (supposedly according to the commentaries, they are more on topic than last season which is a scary thought). Like the shows themselves, this is mostly great stuff but there is a lot of times when you just want them to get back to the episode they are watching. Also, the voices aren’t always clear and one of them will sound like they are in a vacuum. Almost like they have something better to do and just making random comments.

Tour of AstroBase Go 16:08 : This is a little mockumentary of the creation station behind the Venture Bros. To be honest, it tries to be funny but mostly fails. I enjoy actually meeting the show’s creators but I could do without the 5 minutes to talk about Soulbot who gets a speaking part in one episode. The rest is unfortunately mind numbing as well.

Deleted Scenes: There are 30 different deleted scenes (and categorized by episode which is rather nice of them). There is some good and funny stuff here. One note of caution in this great package of extras; a lot of this is just storyboarded, only some of it is fully animated. That might bother some of you, so I figured I would pass it along.

Venture Bros is truly a great show and deserves to be talked about among its peers in a high regard. Sure it’s not perfect but it is the best show on the original Adult Swim lineup. The jokes reference so many things from our youth and presents so much sexual innuendo and sarcasm that we can’t help to laugh at most of the jokes. The discs themselves excel highly in the video and sound department. The packaging is awesome which is rare for me to even bring up. Kudos to whoever did the art and design for this, this is quality work and certainly beats a mere skull on the cover from the last box set. The only flaw to the discs would be the extras where the commentaries and mock featurette while appreciated mostly fall flat. If you loved or even just liked the first season; you’ll truly enjoy the second season. This is great television and can be appreciated by anybody who is old enough to understand it. *Dr Orpheus Voice*, “Now imagine my daughter Triana standing before you in a bikini, think harder boy, feel what she looks like, understand her every curve. Okay I almost got it, almost…no unfortunately that was just a week old bologna sandwich, oh we’ll have to keep trying in order to save your soulllllll…”. *Voice out* (okay so I’m no Jackson Publick or Doc Hammer but I’m got some flair thank you very much!)

Michael Durr has been reviewing movies for the better part of fifteen years now. He primarily enjoys thrillers, sci-fi, animation and even a little courtroom drama. His favorite films include Escape from New York, the Goonies and anything with Alyssa Milano. When he’s not praising Kurt Russell as the greatest actor of our time or scratching his head over a David Lynch flick, he’s spending time at home in Texas with his lovely wife, Lori and his amazing son. How they put up with him is a mystery, but even Basil Rathbone doesn’t have the time to solve that one.
Loonatics Unleashed – The Complete First Season Highly Defined – The World of High Definition