Assume the Position With Mr. Wuhl

Posted in: Disc Reviews by Archive Authors on October 29th, 2007 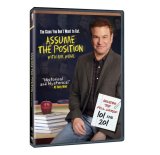 In my mind, Robert Wuhl has never really understood when to quit. The guy was the star of Arli$$, which was an anomaly on the HBO cable channel. Whereas all the other shows on the channel were ending too soon and were too well received, this show went on and on and on, and no one seemed to really like it. So when I saw he was doing a couple of one-off shows set at universities, I thought this was just another way to grab onto popularity.

AS it turns out, these specials, entitled Assume the Position, aren’t entirely horrible. What Wuhl manages to accomplish is to effectively discuss American history and perhaps introduce a point that history might not just be what was read and published. He discusses some things that many in the class (myself included) didn’t really know before, like the origins of the “Yankee Doodle” song and the benefit of the War of 1812. In between, he mixes in slides and animations that bring a smile, maybe even a chuckle, to these jaded lips. Don’t get me wrong though, there are times where Wuhl seems to hit a joke every so often that seems to be the perfect example of “old guy trying to connect to young audience”, and that’s why mentions of Ben Affleck and Outkast follow.

One small annoyance that I had with this disc. The package purports guest speakers to include Seth Rogen (Knocked Up), David Cross (Mr. Show) and Louis C.k., so one would assume that these guys would come into the classroom and kick a little wisdom for a couple of minutes. But really they are responding to questions in another room and serve as a bit of a commercial break so Wuhl can get started again. I’d think the folks at HBO should think about restating their publicity material, or their DVD case literature.

Two channel Dolby stereo sound for the world to enjoy. Since everything is in front of you (not unlike a classroom, hey!), there’s not a lot to really enjoy here.

4:3 for full frame love and attention, but I wasn’t really expecting more, it seems like a pretty modest project with low expectations and budget values.

Sometimes Robert Wuhl is an exercise in tedium and one designed to test the senses and the stamina, but he might actually be on to something here. Some of the jokes might be a little flat and predictable, but the content of the material is good, and at just under an hour, is quick, safe and semi-charming, much like a band aid. But I’d save the $15 and watch it on HBO if I were you.