Posted in: Disc Reviews by Michael Durr on December 22nd, 2008

Power Rangers come, Power Rangers go. By the time Power Rangers: Jungle Fury had come into existence, some incarnation of Power Rangers had been around for sixteen seasons. The series however was unique due to two qualities. The first was that it centered on three Power Rangers where as other series typically encountered five. The second differentiating characteristic was that it was written during the 2007-2008 Writers Guild of America strike. Written by non-union writers, would the series still have the appeal that the Power Ranger shows had in prior runs?

The Order of the Claw has selected six students as potential guardians of Dai Shi’s prison. Dai Shi was an evil spirit who roamed across the earth waging a war against any human that stood in his path. The Order was able to secure his spirit and lock it away in a box that would be guarded by those who were up to the task. The six students were paired into three couples and squared off in mortal kombat. Wait, wrong show. Fatalities in a kid’s show could be uncomfortable.

From the three fights came three victorious students. Theo (played by Aljin Abella), Lily (played by Anna Hutchison) and Jarrod (played by Bede Skinner). However, Jarrod is highly arrogant and shows unmitigated violence against some of the other students. Master Mao (played by Nathaniel Lees) is forced to dismiss Jarrod for these actions and is replaced by Casey (played by Jason Smith). Casey is a brave but inexperienced warrior who shows a lot of promise. Theo, Lily & Casey are chosen as the guardians of the Dai Shi prison.

He also gives them something rather special, the special abilities of the Power Rangers. By the time Dai Shi finds a vessel and an army full of soldiers to fight for him, the three new Power Rangers appear ready to put up a fight and stop the menace. Only time will tell if Casey (red), Theo (blue) and Lily (yellow) can survive against the odds and harness the powers that the Order and R.J. gave them.

One thing that surfaces right away is how corny the plot and how cliché this show is episode after episode. The first couple of episodes establish the story but after the end of the second story, they seem to all follow the same format. Banter, banter, useless plot point, students fight with kung fu but fail to defeat the new minion of Dai Shi, more banter, work on skills, use Power Rangers ability against the “cannon fodder” soldiers. Minion gets po’ed, turns into something huge. The three follow up by becoming Megazord. The two fight, the city crumbles beneath their feet and Megazord is victorious. Dai Shi swears that he’ll find a way to get those meddling kids.

Sorry again, wrong show. I didn’t see a Mystery Machine or a talking dog. However, if one is anything older than a pre-teenager, they might need a good “Scooby Snack” to enjoy this show. It’s convoluted and has barely anything in terms of being watchable. The assorted teenagers that play the parts are okay but when every episode plays like the Adventures of Hannah Montana: The Power Ranger years, one wants to find something else to waste their time on. The only other somewhat bright spot is the character of Camille, Dai Shi’s personal servant (played by Holly Shanahan) whose character is usually involved in some sort of unintentional comedy.

Video
The film is presented in 1.33:1 fullscreen. The video is pretty decent for a regular kids show. Color is quite bright and vivid despite the corny plot lines. The only part where the video gets weird is the giant robot fight scenes. Then it just looks like a pixilated mess with two action figures going at it among fake buildings.

Audio
The audio is provided in 2.0 English Dolby Digital. Again this is surprisingly decent and the action does pack a lot of punch. The dialog is very clear and no kid should have any problem deciphering the show. This is a good thing since it does not contain any subtitles. The only major disappointment here is the giant robot fight scenes (again) which are usually just a bunch of uneventful clanging.

Final Thoughts
The three new Power Rangers had a bevy of 32 episodes before they dropped the show and moved onto Power Rangers: RPM which will probably be replaced by Miley Cryus & Hannah Montana: Power Rangers on the Splits. The disc only holds 6 episodes which forces customers who are actually interested in this particular show to buy at least 5 different dvds when it is all said & done. The series doesn’t offer much unless you must have everything Power Ranger. The disc does have decent video and audio but stripped bare of any real extra. No recommendation here unless you have a child between the age of 5 and 10 that needs something to occupy their time. The only other use for this is perhaps a drinking game, but by the end of 22 minutes everybody will be too toasted to watch the other five episodes. 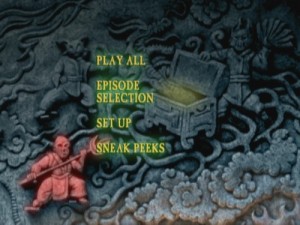 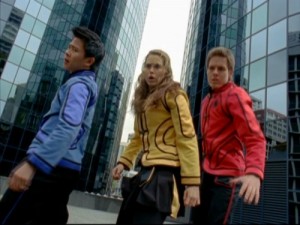 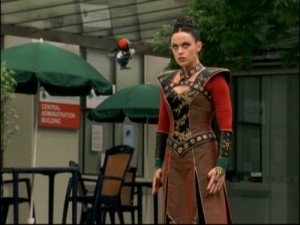 Michael Durr has been reviewing movies for the better part of fifteen years now. He primarily enjoys thrillers, sci-fi, animation and even a little courtroom drama. His favorite films include Escape from New York, the Goonies and anything with Alyssa Milano. When he’s not praising Kurt Russell as the greatest actor of our time or scratching his head over a David Lynch flick, he’s spending time at home in Texas with his lovely wife, Lori and his amazing son. How they put up with him is a mystery, but even Basil Rathbone doesn’t have the time to solve that one.
The History of Black New York In Hell (Steelbook)