Mask of the Ninja

Bradford May, oh Bradford May. I have a good history of watching movies directed by Mr. May from a couple of Darkman sequels to the more recent Ring of Death. His style is pure popcorn and an attitude of leave your brain cells by the door. It is only fitting that I was interested in seeing another flick with his name on it. This one was called Mask of the Ninja. Right away, it sounded like a classic Bradford May movie. However, after watching it, I realized that Bradford had broken some laws in his production. He had broken the sacred five rules of portraying a ninja.

Danny (played by Dominic Rains ) is a cop impersonating a typical street punk who pushes illegal drugs. He gets caught wearing a wire when an undercover cop playing the guitar for the local band makes the save. His name is Detective Jack Barrett (played by Casper Van Dien). In the middle of the arrest, Danny gets a call from his girlfriend: Miko (played by Kristy Wu) who sounds like she is in dire trouble. Jack takes the call instead and decides to investigate what exactly is going on.

Miko actually is in trouble, serious trouble. Her father, Takeo (played by Dana Lee) has been murdered and she fears for her life from a pack of ninjas. Jack tries to take on one ninja but finds himself at the losing end as the pack escapes. Jack tends to his wounds and tries to ask Miko questions about why her father might be murdered by a pack of ninjas (seems like a reasonable question). She however defers her entire line of questions to her assistant, Hiro (played by Anthony Brandon Wong).

We find out that the father is the head of Takeo Industries who make spy & surveillance equipment. In turn, the violence from the ninja clan starts to escalate with more bodies falling by the waste side. Jack has some fighting skill from being a marine but he is no match for a talented ninja skilled in the art of ninjitsu and armed with swords and throwing stars. Can he get the answers he needs and can he stand up to the centuries old ninja clan that lies in his path?

Before we continue, I feel compelled to bring you:

The Five Sacred (Stereotypical) Rules of portraying a Ninja.
1. One must wear the stereo-typical dress of a black hood where you can only see two eyes and all black outfit.
2. The ninja must be silent and move with stealth.
3. The ninja does not take on a large group, it tends to pick solo targets to destroy.
4. The ninja almost always attacks in darkness, never in broad daylight.
5. And above all, the ninja must never show his face to others.

As they say, 1 out of 5…is very crappy. The only thing they do right is the dress which doesn’t exactly scream ninja either. It screams Halloween costume. The pack of ninjas starts out innocently enough when they kill Takeo, Miko’s dad. They use blowguns, they move with speed & stealth. Then it all goes to crap. One ninja decides to show his face constantly and he isn’t exactly the most picturesque ninja in the clan either. The coup de grâce comes when the ninjas attack the police department towards the end of the picture. The entire police department. In broad freaking daylight. This isn’t exactly a quiet mission either as the ninjas make about as much noise as possible. When you name a picture: Mask of the Ninja; one would think you would keep it to at least these fundamentals.

All that ninja nonsense aside, the actors & actresses aren’t half bad. Kristy Wu & Anthony Brandon Wong put on decent performances and show range on their characters. Then there is the star of the picture, Casper Van Dien. Think Starship Troopers. *shudder* Hey, I liked that picture. Again, I’m probably the only one in the room who did. He does a very “B” level performance as he tries to show that he is an action star and a ladies man to boot. He does okay, but tries to do too much in a film where the action could have taken more of a lead role than Casper’s performance.

The film is presented in 1.78:1 Anamorphic Widescreen. For a Cable TV movie that went direct to DVD, it looks surprisingly good. The colors are sharp and I liked the presentation. The only thing I had a problem with was the whole flash effect they wanted to show off at key points of the movie. It gets annoying fast and should have been removed all together.

The audio is provided in 5.1 English Dolby Digital. Perhaps the most amazing thing of this DVD is how good it sounds. I’ve never seen such a small picture make such good use of the surrounds. Action is fast and furious and comes from all angles and speakers. Dialog is clear, nothing too overpowers the other and it makes for a great mix. There are no subs which is unfortunate when other languages and dialects besides straight forward English exist.

Despite the weak showing of this movie, I will always continue to watch Bradford May directed movies. Heck, if Bradford May ever wants somebody to do a commentary of his films ala Bey Logan for the Dragon Dynasty flics, I’m his guy. (really, Bradford…call me) However, this one was a misstep and was even worse than Darkman III. The ninjas were not convincing and the actors were only average for the better part of the film. The one really nice thing I can say about this flic is that the audio is great and the video is well done too. It is just a shame that this film didn’t either go more over the top or hold my interest like some of his other flics did. Good to rent, but not much else I can say about it. 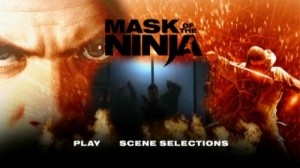 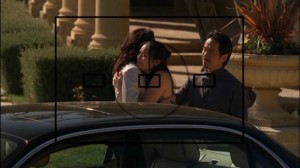 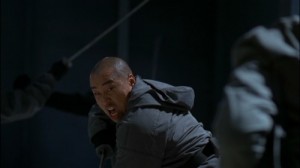 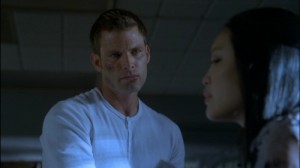 Michael Durr has been reviewing movies for the better part of fifteen years now. He primarily enjoys thrillers, sci-fi, animation and even a little courtroom drama. His favorite films include Escape from New York, the Goonies and anything with Alyssa Milano. When he’s not praising Kurt Russell as the greatest actor of our time or scratching his head over a David Lynch flick, he’s spending time at home in Texas with his lovely wife, Lori and his amazing son. How they put up with him is a mystery, but even Basil Rathbone doesn’t have the time to solve that one.
Blitzkrieg: Escape from Stalag 69 Diary of A Tired Black Man