Puberty for me was an odd thing like many teenage boys. My dad threw a medical book into my lap when I turned thirteen and said if I had any questions to let him know. This was followed by more literature being thrown into my lap such as Playboy when I wasn’t any older than fifteen or sixteen years old. In addition to magazine publications, I was also allowed to buy some objectionable games and music. One of these games was the Leisure Suit Larry series. The original PC games had great (and dirty) humor, fun puzzles and some of the best basic game play you could fit into several floppy discs. Times change and the racy appeal of Leisure Suit Larry has made the Xbox 360 console. *sigh* I’m so sorry it did.

One of the appeals to the Leisure Suit Larry series is usually the graphics. Most of the games (especially once they got to VGA graphics) featured women that were pretty easy on the eyes. They weren’t real of course, but sometimes we hoped they were. In Box Office Bust, something isn’t right. The characters look reasonably drawn, especially when it comes to the males. But the females feel all wrong.

At first glance and in many of the cut scenes, they don’t look too bad. Sure, they have balloons for chests; but do you really expect them to be accurate? Come on, this is Leisure Suit Larry. When you get closer to the females or encounter them in actual game play, the result is jarring. Their face is contorted and feels all out of place. Can I get a paper bag for the prostitute in the saloon? It would be much appreciated.

Once you get past the characters, we focus more on Larry and the scenery around him. At times, it can be serviceable. However, since you spend a ton of time jumping in the game, you can find yourself in places of the game where perhaps you shouldn’t be. The graphics in this state become unstable and often the game will pick the worst angle to display it from (more on the camera later under game play).

The best thing about this game has to be the sound. One of the smart things the people at the studio did was to go out and get some good voice talent. The game features voices from Josh Keaton, Jay Mohr, Shannon Elizabeth, Carmen Electra, Artie Lange and Dave Attell. They might not be “A” list celebrities but heck chances are you recognize at least 50% of them. I usually turn on subtitles for the dialog sections of games but after turning this one on, I found myself hardly reading the passages. The dialog is clear.

Since the game is in 5.1 Dolby Digital, how are the surrounds? Not bad, the sound effects are present and nothing really feels that out of place. The music isn’t bad either with many original tunes that were specifically created for the game. The songs are often very funny too (The cactus tune is genius). The only issue? Where the heck is the original theme from the PC games? (If you know the game at all, especially the original you know what I am talking about) Minor complaint aside, it can be easily said that if the rest of the game was as good as the sound presentation, this could be the sleeper hit of 2009. (Not just put me to sleep)

Leisure Suit Larry: Box Office Bust can be best described as a combination of Grand Theft Auto and a platforming game where you jump around a lot. Let me explain. The game is set in a film studio with a fairly good area to explore. As missions get completed, more of the world opens up including more studio sets and things to do. These missions can be as simple as getting some graffiti off the walls to something more complicated such as robbing a bank which involves dodging flashlights in a dark lit corridor to get a key and then getting the safe open. However, this runs stem long into the first real problem in this game (besides inflatable breasts and barnyard animals).

Most of the missions in the game involve jumping to some ridiculously high area. Then you place an object (or push an object or perform an action) in that area. Finally, figure out how to jump off that area without getting hurt too much. Rinse and repeat. This would be fine if the game’s absolutely awful camera was operating correctly. More times than not, the camera will switch to an awful position when you least expect it. Furthermore, that camera is fixed and you can not tell what to do next. So unless you get lucky, you end up usually jumping to your death. This might even be okay if it weren’t for the fact that you can not save in the middle of a mission for those crucial checkpoints.

Beyond normal story-based missions, there is some variety in game play. There are race, seduction and director missions that are also included. Racing starts off innocently, but as you get more involved the checkpoints get harder and that little golf-cart of yours simply isn’t going to go in the direction you want quick enough. Seduction is basically a game of trial and error. Most of them start off with an item you have to find like a cd of their favorite band. Then it switches to a favorite response mini-game where you have to pick the right response based on her background and common sense. (Don’t ever pick a response that has the word masturbation or something to do with the size of your package) The most in-depth side mission has to be the director mini-game where you get to cut a scene based on the dialog and the best camera angle for a given shot. Keep the main characters always in the shot for the most part and away from the director and behind the scenes folks.

One of the other few neat ideas is the dreamscape based missions such as Wild West or Horror (think Michael Jackson’s Thriller) or Bytanic (think Titanic) where Larry goes to sleep and is thrust into a hero role in some fantasy landscape. Here, you find your character going through about seven to ten different missions before Larry wakes back up. The only problem I have with these missions is that there is no known way of getting back to the film lot until you complete the entire dreamscape. If you want to go find Larry awards or try something else, well then you are simply out of luck.

There are also fighting and shooting aspects of the game. Fighting involves punching a lot and the occasional (and random) roundhouse kick. Shooting usually involves switching to a first person view where you do your best to line up the crosshairs and pull off a shot. Expect many misses to follow. Thankfully there is a regenerating health heart or I would have probably put the game down in about twenty minutes and cried myself to sleep. Instead, it took a few hours before I started crying. The difficulty in this game is quite high but it isn’t due to the missions. Those are straight forward and anybody with two inches of common sense could perform the missions. It’s to do with the wonky cameras and ridiculous jumping into places unknown. Ledge jump, ledge jump, ledge jump, then change of camera angle (which now becomes fixed). *ponder* *ponder*, jump into X area where you should have tried a wall jump and fall to your unfortunate death. Try, try again. You’ll want to throw your controller across the room. I guarantee it. Thankfully, Xbox controllers are expensive which keeps me from smashing it into 1,000 tiny discreet pieces.

As mentioned above, there is some variety of missions in game play. The problem is, it’s very little and many times in the game you reach a complete state of boredom. This is Leisure Suit Larry, there should be boobage and sexual mini-games all over the place. Think about Grand Theft Auto for a moment; unless you are in a specific mission you can do about a million things at any given moment. If you aren’t doing a mission in LSL, the extent of what you can do (outside of completing a few achievements) involves jumping around and collecting Larry awards or jumping on people’s heads and watching their reactions. It’s that bad. The game should not be this dull.

The achievements in the game are fairly straight forward with 30 total achievements for 1000 gamer points. Most of them are story-based achievements which give you points for achieving certain milestones in the game for the various missions and dreamscapes. A few others involve a little bit of thought such as destroying three vehicles within 60 seconds of each other (Demolition Boy) or reach the highest point in Laffer studio (Broadcasting on Top of the World (look for the radio tower)).

It doesn’t hurt that much to not like a game that you have never heard of. However, it hurts terribly when the hated game is in a series of games that you have come to love. I love the Leisure Suit Larry series. On PC. Since the game has come to console, it has been one travesty after another. First they don’t include Al Lowe (the original creator) in the game and then they create one of the absolute worst cameras for game play I have ever seen. Then they masquerade a game where you just jump a lot into what appears to be a sandbox type of game. Sandbox game for Leisure Suit Larry, great idea! The idea of Larry jumping around and around trying to reach the roof or top of some structure for almost every mission, bad idea. I just wanted so much more out of this game.

It’s rated M for Mature but that is mostly due to the language (which is absolutely filthy by the way). There is no nudity to speak of, just scantily clad women (or carefully framed scenes where you would hope to see something and never do). The least they could have done in this mess is at least appeal to my days as a pubescent teenager and go overboard with the women. The game has a few good ideas and some good concepts but struggles from plain laziness. Laziness in mission design, laziness in things to do, laziness in achievements. The only area where the game gets it absolutely right is the sound and the inclusion of talented voice actors. I never thought I would see the day where I couldn’t recommend a budget Larry game. I mean Larry for $20…how could it be bad. But the game is so very bad, and only the most dedicated will ever pick this up. Not recommended. 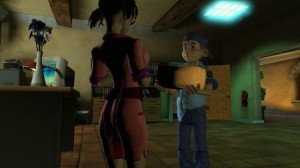 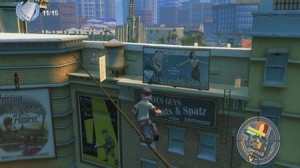 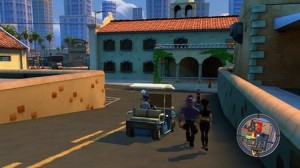 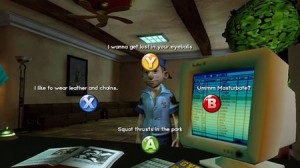 Michael Durr has been reviewing movies for the better part of fifteen years now. He primarily enjoys thrillers, sci-fi, animation and even a little courtroom drama. His favorite films include Escape from New York, the Goonies and anything with Alyssa Milano. When he’s not praising Kurt Russell as the greatest actor of our time or scratching his head over a David Lynch flick, he’s spending time at home in Texas with his lovely wife, Lori and his amazing son. How they put up with him is a mystery, but even Basil Rathbone doesn’t have the time to solve that one.
Star Trek: The Original Series – Season 1 (Blu-ray) Street Warrior